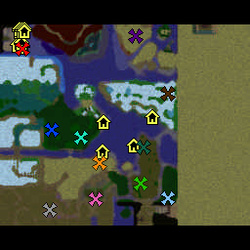 Titan Land: Lands of Plenty
Titan Land is a popular map template, with a tradition of over a decade, orignally created by the user MetalWarrior. Originally, it was very similar to God's Land, but over the years it had evolved into a more sandbox-style roleplay environment, not much different from SotDRP.

Titan Land LoP aims to continue in that direction of making the genre even more sandboxy, introducing a variety of new commands and new options for players. Most importantly, it also introduces an advanced save and load system, allowing players to save their bases in single or multiplayer and then reload them in other games.

The SaveNLoad system was originally developed for LoP, but it has also been implemented in Titan Land KoT as of 3.0 EAV5. You can find the most up-to-date tutorial for SaveNLoad here: TL Save/Load System Tutorial | HIVE

You can see the code and download SaveNLoad here: Son-Guhun/SaveNLoad

Open Source:
TL: LoP is completely open source. You can find all the code on github. If you wish to see the resource files (models, sounds, etc.) and can't extract them from the .w3x file, you can contact me. I will try to get them to you as soon as possible.

The first map included as a resource is the protected, slk-optimized map. This is the official release that should be player online. In the first post, you will find the unprotected map, which you can open at your leisure.

This map is powered by w3x2lni.

+ SaveNLoad system: The SaveNLoad system, used in KoT and other private RP maps, was developed in LoP and supports the most features in this map. Saving includes: units (including names, patrol points, waygate destinations, and more), terrain and trees.

+ Create your own local environments: Using the Rect Generator deco builder, you can create your own weather effects and even local terrain fog. Now, your caves can be dark, and your evil empires can have a blood-red sky!

+ Give any unit any name that you want. Additionally, the Titan (in the future, this command will be available to all players) can make almost any unit in the game a Hero. If you include these units, you have over 500 unique heroes to RP with!

+ Over 63 Deco Builders are available. Additionally, many decorations have upgrades, so you can cycle through all their variations, without needing many superfluous builders. Deco Builders are divided in 3 categories: Special, Basic and Advanced. For newer players, using only the Special and Basic decos is advised.

+ Decoration abilities: Each decoration comes packed with a set of QoL abilties that allow you to copy it, move it around, rotate it by 90 degrees (in the future, any angle) or even make it face any angle that you would like.

+ Advanced selection command. With -sele and -seln, you can select any deco builder, as long as you know some part of the start of its name (for example, -seln wat to select the Water builder). You won't even need control groups anymore!

+ Advanced camera commands, giving units to neutral and taking them back without needing the titan (other players can't take your neutral units), set your units' player color without having to change your own (thus leaving player numbers clear and consistent), smart autoname command (only sets your name to units whom you have given custom names)

- Terrain-editing framework that will allow you to work as if you were inside the World Editor!
- Unlimited terrain tiles (using images)
- Custom images (to make your terrain look even better!)
- Better script optimization (after I make a nice envrionment to use my constant inliner)

- Fixed Tyrael's Will of the Tribunal CD not being reduceable

- Fixed crashes:
- When Treant Bird was selected with 1 or more other units
- When Cosmis summoned a Titan Tower before any structure was built (removed the ability)