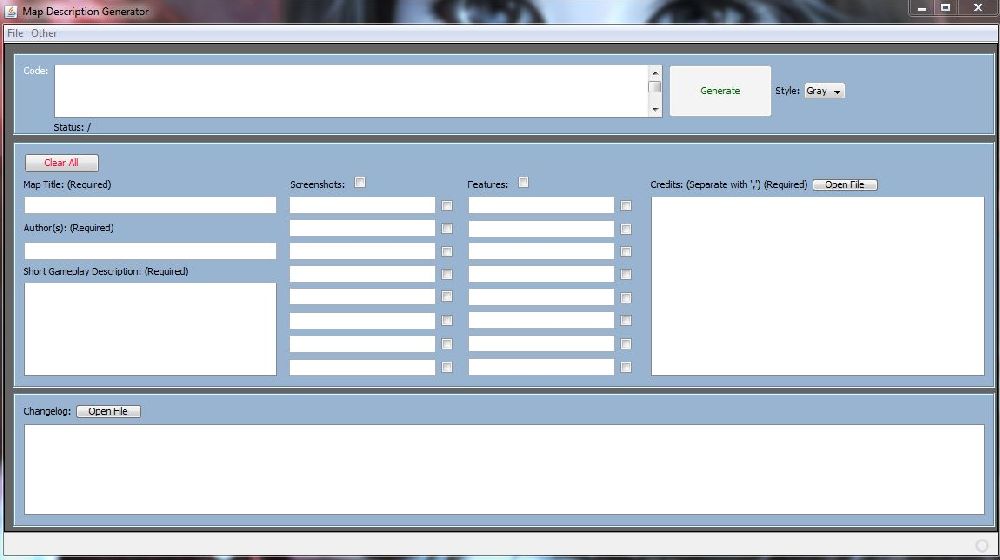 The user gives the tool the info needed for a good description: Map Title, Author, Short Gameplay Description, list of features, screenshots, credits and changelog
... And the tool takes that and adds fancy BBcode to it. This is a better alternative to -Kobas-'s Map Description Templates which needed to be manually edited by users.

• Easy to use
• Different Styles
• No BBcode editing (skills) required

• Extract the downloaded .zip, open up the folder MapDescription->dist->MapDescription.jar
• Enter all the information you want. (Title, Author, Gameplay Description and Credits are required)
• To add screenshots, upload them first online, then insert their image URL into the different fields and tick both the checkbox next to Screenshots and the one next to the field which contains a URL
• Open File allows you to select a text file and that file's content will be inserted into the below field
• Finally, press Generate and the code has been copied to your clipboard. All you have to do now is ctrl+V it in the map thread you want it to be in

「Beyond Darkness: The Shadows」 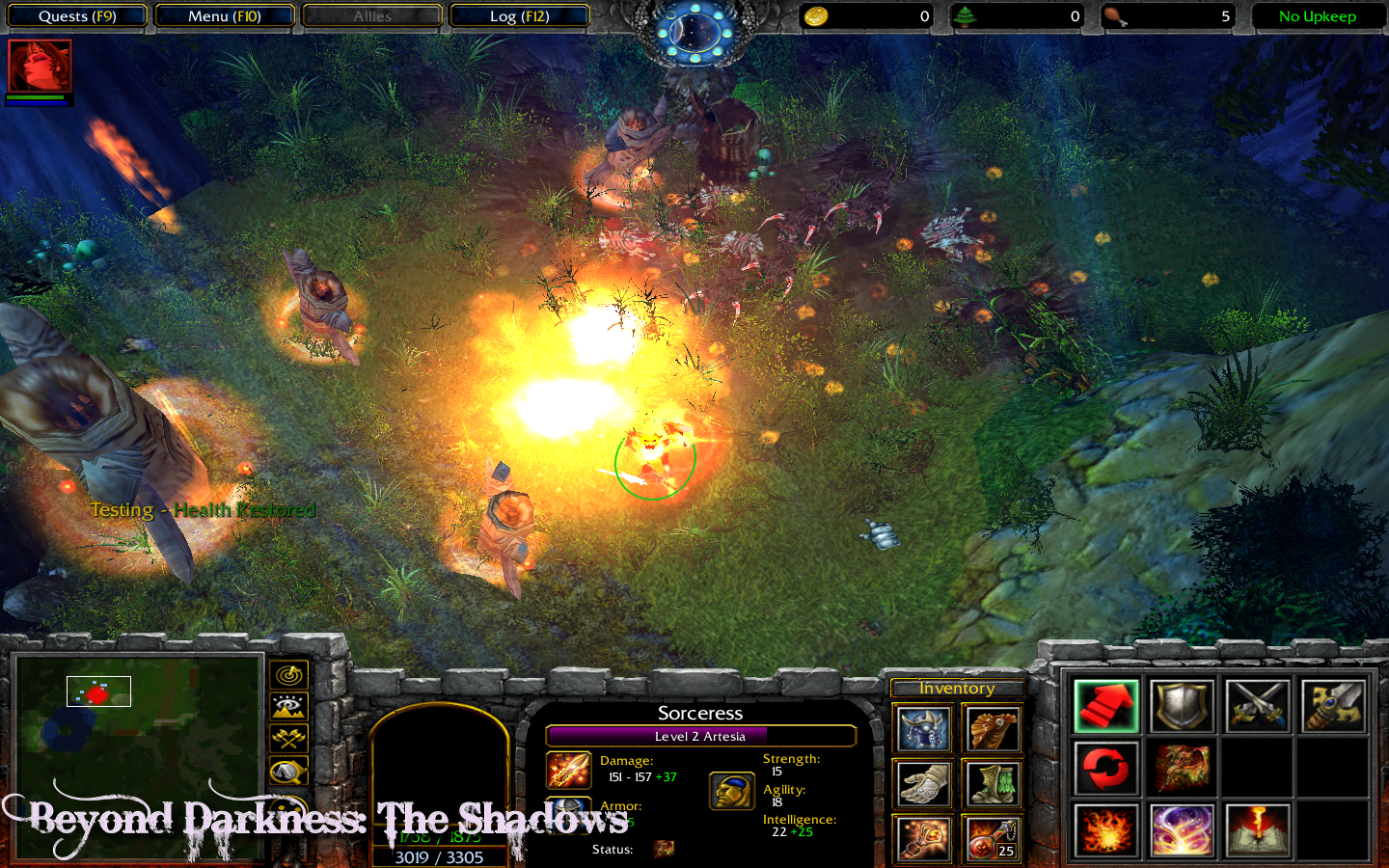 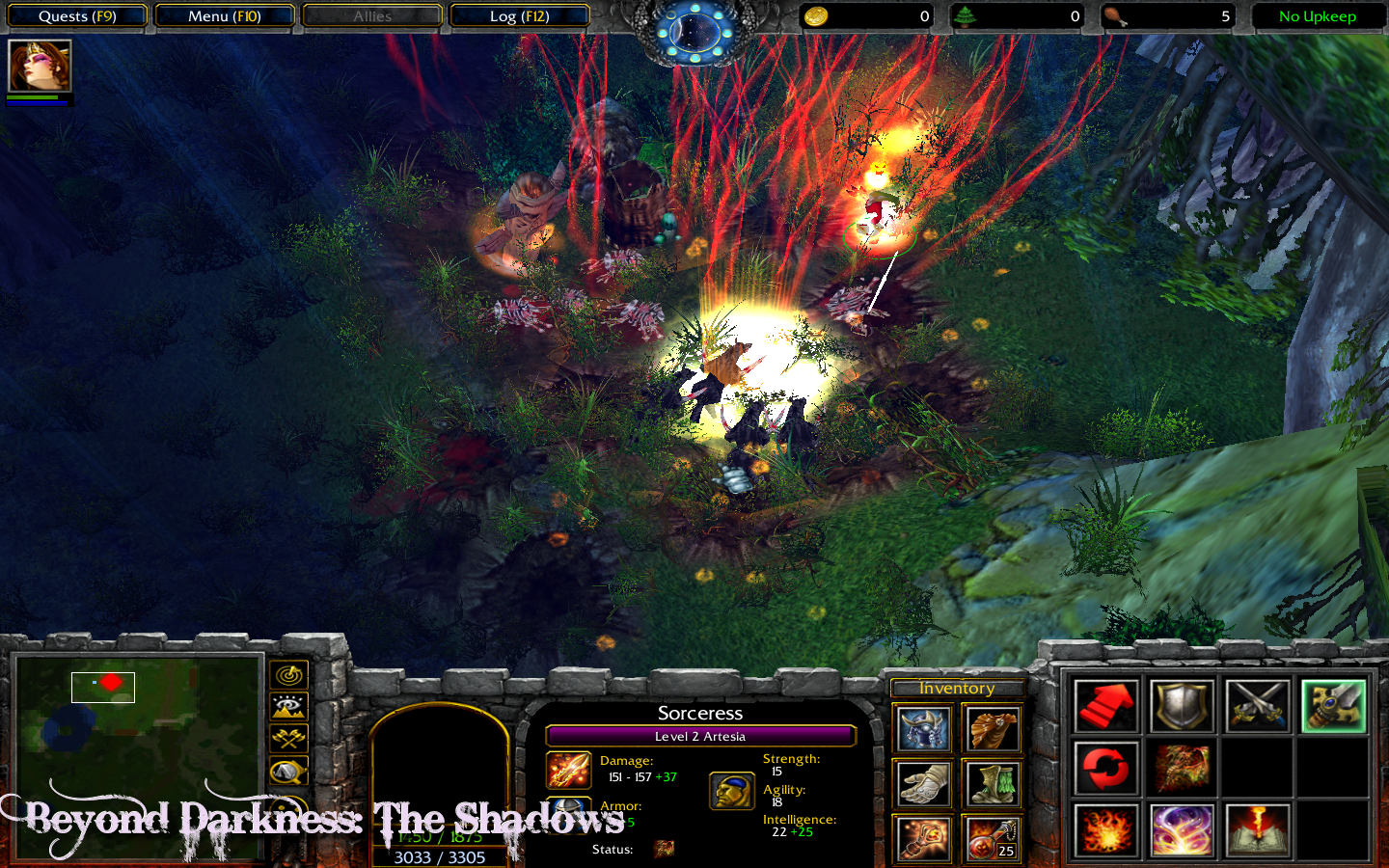 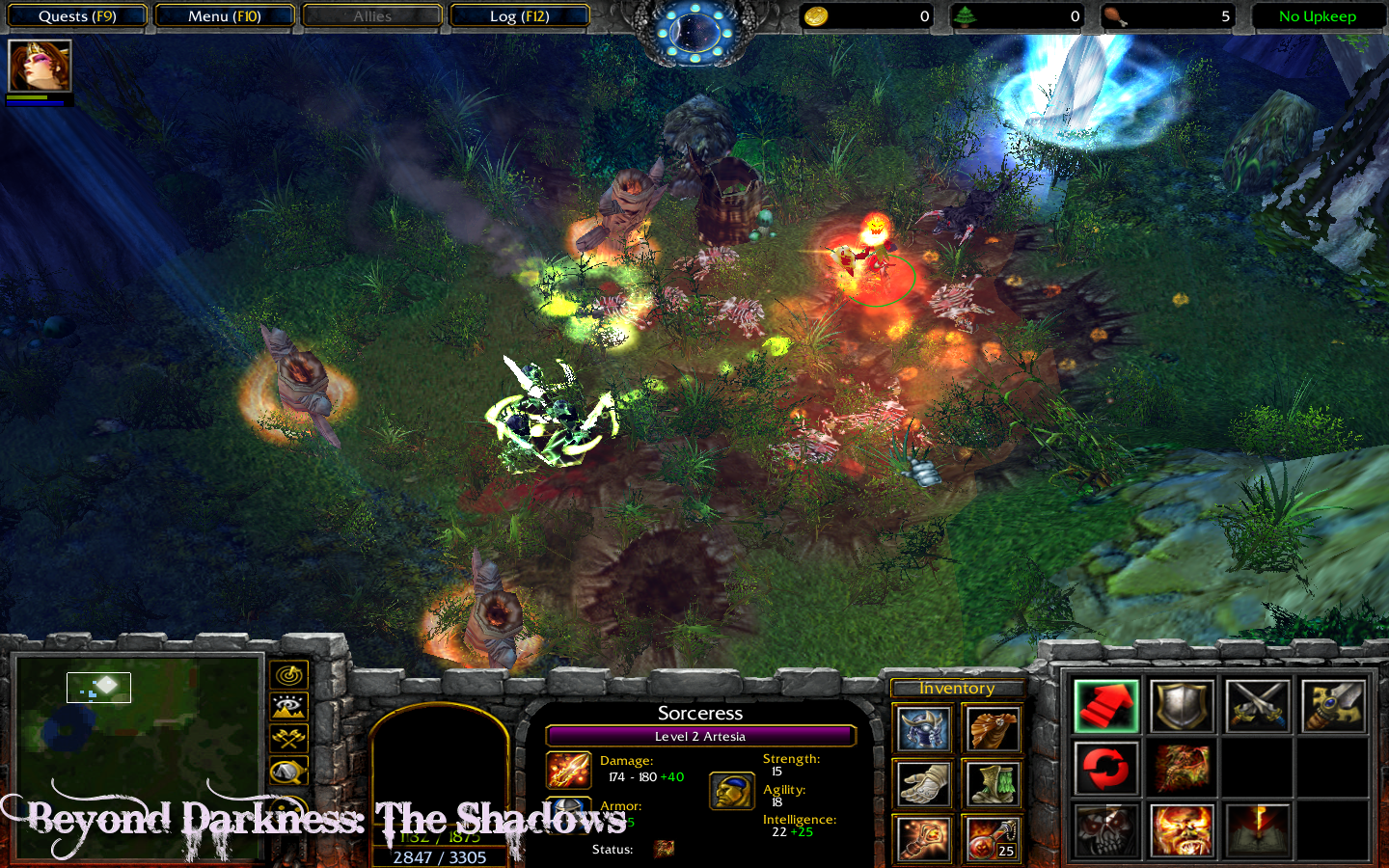 Icons 4 Skins 2 Maps 6
I've tried this already, and i gotta say i love it. Not only does it get rid of the hassle of manuelly editing the BBcode template (and sometimes making a mistake that destroys the whole thing >.<), but now even newbs can have pretty map descriptions

Also, this tool works on my Windows 7 64 bit PC

Tools 1 Maps 13 Spells 1 StarCraft II Resources 1
Pretty much every java app has that size as far as I know.

Models 33 Icons 17 Packs 1 Tools 3 Maps 4 JASS 2
Awesome useful tool for map developers.
However, some tips:
1) Screenshot and features count shouldn't be fixed (now you cannot add more than 8)
2) Changelog also should form for each version of map not one form for all versions

Anyway, 5/5, it is promising project. Good luck with it!

Tools 1 Maps 13 Spells 1 StarCraft II Resources 1
Updated it:
Its filesize has been reduced to 300kb from 3mb.

This is a better alternative to -Kobas-'s Map Description Templates which needed to be manually edited by users.
Click to expand...

Maps 6
Wow...nice work. I definitely going to use this when I decide to post my next map.

Edit: Although, it would be nice if you could add different choices of Themes where you can choose from. Maybe you can add Kobas's Templates to these tools so it will have a variety to choose from.

♦ Beyond Darkness: The Shadows ♦

Maps 1
wOw, This Can Help Me a Lot, Thanks Admin Vengeancekael.
you did'nt VM or PM it to me, so that i can download it, and use it for my description in my map..
THANKSSSSSSS !!!!!!!! A LOOOOOTTT!
I hope it can help me! yEsss ! i Love it.

Maps 4 Templates 1
Wow, nice! I have never been wrong voting you for UoTY award. Thanks for this awesome Generator. +REP!

Maps 6
Hi! How do i upload a screenshot? the answer is probably easy and something i should know, but i dont plz help

Models 3 Icons 2 Skins 1 Maps 2
Not to be offensive but this is for lazy people, I do my stuff the old way :3

Maps 6
Thanks! Lol,i actually found out right after posted the message... Fail Its a great thing you made!!! really help a lot!

Tools 1 Maps 13 Spells 1 StarCraft II Resources 1
@Codric, it's to make lazy people at least have a decent description for their maps.
@Kenzomaster, Thanks! <3

Icons 2 Skins 2 Tools 3 Maps 10 Spells 5 Templates 5 Tutorials 6
Just wait, I will make C++ version with dynamic interface in "near future", it will be better alternative

Models 1 Icons 2 Packs 1 Tools 2 Maps 17 Spells 30 Tutorials 4
Great Tools, I'm putting the tool link to my Signature, and as a reward, the tool get 6/5 from me. Great Job VK + Reps (you won't expect how much you get for this tool, I use it to keep Map Section clean from improper description Map)

Icons 2 Skins 1 Maps 1
This tool is excellent. Saves lots of time from me by making the description itself. A tool that is essential for everyone. 5/5

Icons 3 Maps 18
Thank you, now I'm going to get a description decent!!

Models 1 Skins 1 Maps 4
this is amazing!

Damn people and their magical coding powers. Very damn useful, I'd definitely use it. Code Wizards I lay my curse upon thee! Now you are forced to fish in my vessels of fishing! Mwahaha!

• Extract the downloaded .zip, open up the folder MapDescription->dist->MapDescription.jar
Click to expand...


May someone help me with this? I don't understand it and where is the folder? Yes, I can tell that every else knows how to do it :/

*(Picture 5): The window will automatically open up once the extraction (picture 4) is finished.

• Extract the downloaded .zip, open up the folder MapDescription->dist->MapDescription.jar
Click to expand...

I couldn't find .jar file there

Icons 2 Spells 3 Tutorials 2
is the shape of the description will always like that?

Tools 1 Maps 13 Spells 1 StarCraft II Resources 1
What do you mean?

♦ Beyond Darkness: The Shadows ♦

hi vengeancekael, can i ask some question ?
where is the application ?
i dont see anything
don't have "Extract All" button in windows 7.

Adiktuz said:
Download the zip file, extract, then go to the extracted folder, then go to dist folder
Click to expand...

This Are the files inside the dist folder,
what should i do next ?

Models 3 Icons 2 Packs 1 Tools 1 Maps 3 Spells 17 JASS 2 Tutorials 1
It's a JAR file... you should install Java first (as said at the top part of the thread), so that you can open that MapDescription file
You must log in or register to reply here.