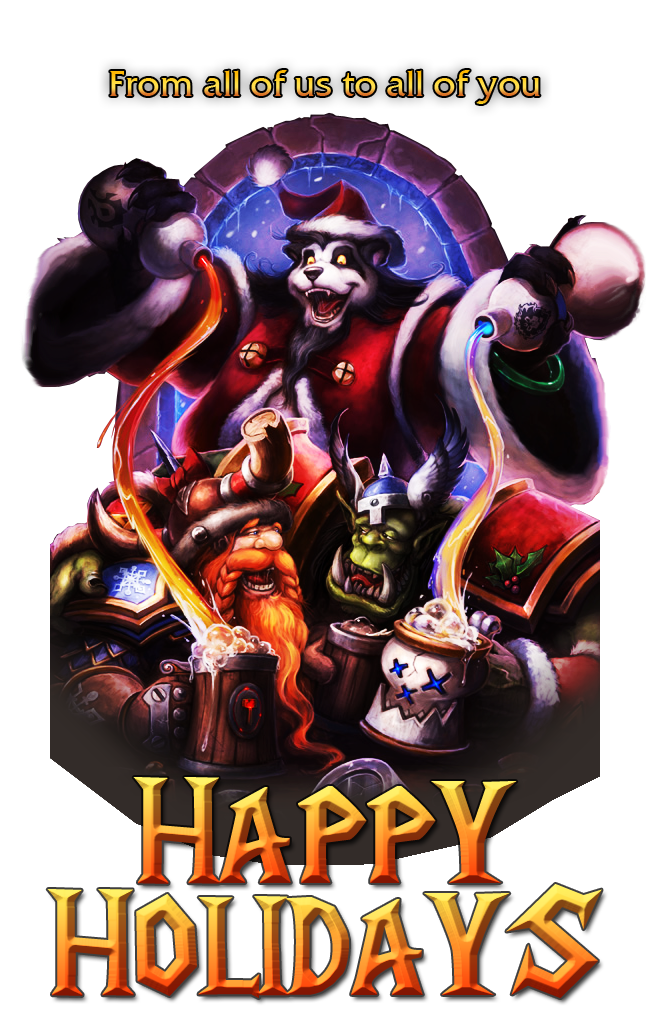 We're happy to wish you all holiday greetings and a happy new year! The time has come for us to write something nice and feel-good about the ending of the year.

This year has been a very interesting one, for both the site and the Warcraft 3 community. Here is a summary of the highlights that happened during the past year:
It was a very good year for The Hive Workshop, but we can say that it still feels like this is just the beginning. The new site has been lacking in some areas compared to the old one, but is rapidly improving and in many cases far superior now. We're excited about being able to add new features that have been planned for years, and that we're sure you will love.
Keep on the lookout for current maps expanding past 8mb, and new maps being created to use the limit raise to its full potential. The hosted project Gaias Retaliation has even been ready for a while with their awesome 50 mb version.

This news post has been updated frequently due to live coverage of the patch. You will see replies in reaction to earlier statements. 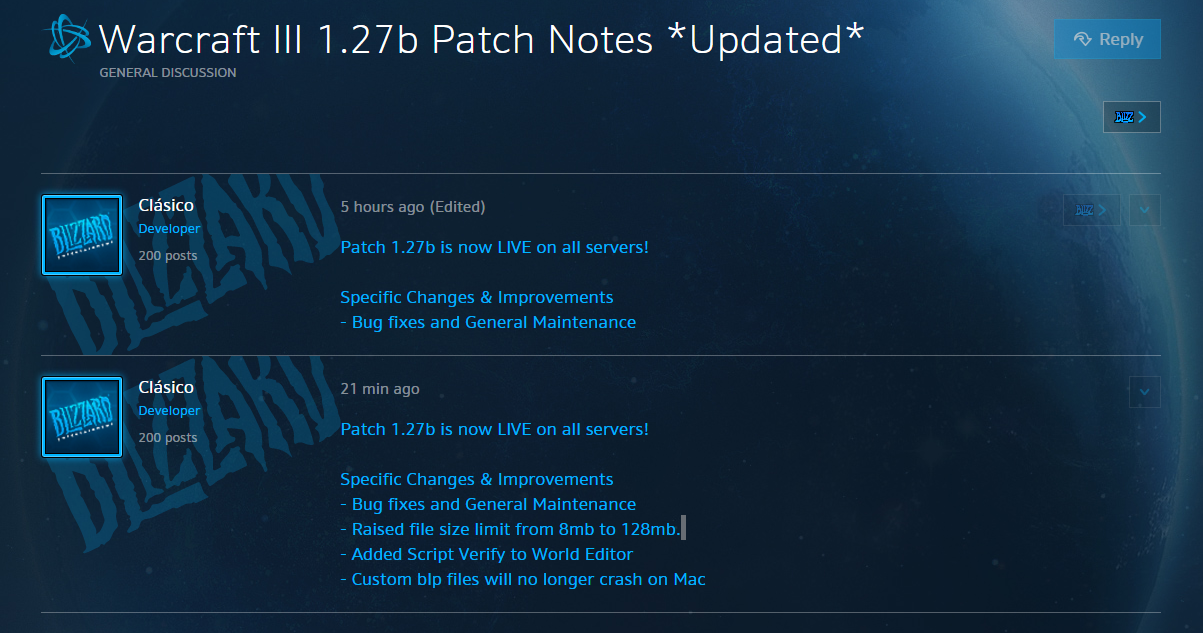 Despite Blizzard's patch notes not mentioning it, we have confirmation that the 8mb multiplayer limit for maps has been removed on Battle.net, with the new limit being 128mb! Various Hive Workshop users have tested out maps over 8mb, including a specialized version Gaias Retalliation ORPG which is around 50mb. Map maker @Zwiebelchen succeeded to host and play that map online in Battle.net. Other map makers and testers reported the same.

What does this mean? This means one of the biggest limits of WC3 modding has been taken off. There is so much more map makers and other types of modders can do now! This makes room for more creativity, complexity, and higher quality content, along with more things to experience and improve in custom games online. The top RPGs can finally be expanded. Epic strategy maps can now have more room for upping the quality without sacrificing quantity. Horror, first person shooter, anime, Sci-Fi, and more types of maps can be taken to a whole another level. We can also see more hi-res imports from models, textures, etc.

There are also some World Editor and file changes (including bug fixes) reported by some users, and you can discuss some of the specifics in this thread or throughout the Patch Discussion forum. We'll hope to have some sort of list of the changes and bug fixes.

Here you can find our thread from may regarding our meeting with Blizzard about The Future of Warcraft. You can find the PDF document Blizzard seems to be following attached to the bottom of the mini-article's first post. We know there haven't been any melee / ladder changes, but those things plus more emphasized in the document we sent Blizzard.


The older, announcement news for this patch is below.​

Battle.net players could be experiencing some downtime today.

@Ralle and I are betting it's just a compatibility patch that continues off of 1.27a. This should not be the 'big patch' we are expecting with our talks with Blizzard. However, with any patch, we'll keep everyone updated with details on this thread if anything notable happens!

UPDATE2: There are reports that the Northrend (Europe) realm is down or bugged at the moment. Azeroth (US East) seems to work, though.
https://us.battle.net/forums/en/bnet/topic/20752465862?page=1

UPDATE3: The Battle.net realms appear to be working now. Reported quick fix: Patch on a different server than Northrend, then Northrend should be able to work.

UPDATE5: Maintenance appears to be over.
421 comments…
The Complete History of Blizzard (+Warcraft 3 Part!)

Two days ago, PC gamer put together an amazing article for anyone who's played a Blizzard game. It details the complete history of Blizzard and its games, including everything from The Lost Vikings (1992), Diablo 2 (2000), Overwatch (2016), and everything between. PC Gamer: The Complete History of Blizzard Games on PC

Here's a thorough excerpt from Scott Mercer's part of the Warcraft 3 section. It's actually filled with a load of great, uplifting things regarding the modding community (that's us!) and the world editor. If you want to skip to that, feel free to scroll down to the texts highlighted in gold.​

"Early on during Warcraft 3 development, there was even more focus on the lower unit counts and the heroes. The concept was running around in that party, where here's your hero and here's your footmen along with it. The gameplay was even more of that. And then we actually took it back to sort of this in-between state, where there was absolutely base building, this normal RTS sense of you start small, build up, go through a tech tree. But it was the heroes, and the fact that the heroes leveled and had items, there were all these RPG elements that got added to the RTS genre through Warcraft 3. That concept alone is what I think inspired DotA to do what they did.

"The level editor that the players ended up having was the exact same level editor we needed to create the campaign. When you talk about the Warcraft 3 level editor, you have to go back to the Warcraft 2 level editor. We made the campaign for Warcraft 2 with that editor. It was very limited in what you could do. I think most all of the maps ended with 'destroy all the enemy buildings.' Going forward with Starcraft, we improved the editor, added more ways for you to win, more things we could do. You saw that in the Starcraft campaign where there was a bit more variety in the types of missions that we had there, and that was due to the editor becoming more robust.

“And then going forward into War 3, in early development, we knew we needed to create an even better editor because Warcraft 2I was our first 3D game. We wanted to do all the in-game cinematics and storytelling within the game, so the editor had to be even more robust...We had to create the camera system. There were the in-game cinematics we had, usually at the beginnings and ends of missions, where there was a character interaction. We actually had to be able to place those cameras inside the game world. What the editor allowed us to do was move the map around, the view of what the player would see, and take snapshots and sort of create cameras out of that. It was that kind of camera control that I think a lot of people used in the mod community to create these modes of 'oh, here's these crazy RPGs that are like third-person over a character.' There were a lot of things we could do with that. But that was all going back to needing to make these in-game cinematics.

“A lot of the very important features that the Warcraft 3 editor got over time were things that we needed, that made our lives easier, making the game. Things like being able to create new units with, choosing a piece of art, assigning a bunch of stats to that, if we could do that in the editor, then designers could do that without having to go bug programmers to put in the game. The editor allowed us to be very nimble with our designs in the campaign and really allowed our programmers to work on bigger issues. The mod community basically took all that and ran with it."

"The scale [of the mod scene] absolutely took us by surprise… We couldn't have imagined those kinds of mods would end up existing. We were very excited about it. It jazzed us up. A lot of the ideas that came from the mod community were things that, when we worked on Frozen Throne, we integrated some of those. Like the very last mission of the Orc campaign in the expansion took a lot of its gameplay cues from the Aeon of Strife, Dota type games with waves crashing into each other.

“It was a super exciting time. We just tried to go in and play them occasionally and see what people wanted. And all through this we were getting feedback from these mapmakers saying 'Hey, could you fix this?' There were actually some bugs to fix, and new features they wanted. A lot of those features were things we were like 'yeah totally, if we give you those features, we get those features in our own work.' It was this wonderful time of the community feeding on our creativity, we were feeding on their creativity. And the Warcraft 3 editor was allowing all this to take place."
12 comments…
Re-introducing Bundle State

This might be a bit technical, but it's very important. If you remember the old site, we had states for every resource (now called bundles) and those were pending, awaiting update, approved and rejected.
Until today we have had a different system. Pending bundles were submitted in a sub repository called "Submissions" and when approved moved into the main repository. If rejected, they were moved into "Substandard" unless they were stolen/inappropriate/broken in which case they got deleted.
With this system, bundles did not have a state, instead they were put in a place named after the state. This is inferior because when looking at the bundle you would have to look where it is located instead of what state it has. Also, pending bundles would only be visible when looking specifically inside of "Submissions".

We have received a lot of feedback about the fact that pending submissions are less visible in the new system. Turns out it's very helpful to interleave submissions with approved bundles to get feedback to the authors and feedback for the moderators/reviewers to make better and faster decisions. It also means that even if we have a big backlog of pending bundles, it's not as serious because they are still visible and as accessible as the approved ones.

Because of this, today we are re-introducing bundle state. It is not 100% as you know it, but it will feel similar enough. Here are the new states:

Bundles will have these icons wherever they are displayed. You will be able to filter between the states in repositories and the search page. This also means that the "Submissions" and "Substandard" sections are going away.

With this new system also comes a new "Moderate" button for moderators/reviewers to simplify the process of going through bundles.

Lord of the Clans
Submitted by OutsiderXE
1,361 downloads

Day of the Dragon
Submitted by OutsiderXE
925 downloads

The Chosen Ones 1.0
Submitted by Aeroblyctos
1,252 downloads

The Adventures of Rowan the Wise v4.4
Submitted by Turnro
611 downloads

Hero of The Empire v1.26C
Submitted by Siegfried
636 downloads

Curse of the Forsaken v3.0.1
Submitted by tomoraider
1,683 downloads

Rise of the Blood Elves v3.0
Submitted by tomoraider
1,301 downloads

The Scourge of Lordaeron - Enhanced
Submitted by teozamait
657 downloads

Warcraft 3 Re-Reforged: Exodus of the Horde
Submitted by InsaneMonster
828 downloads

Call of The Swarm
Submitted by The Nightmare Book
1,110 downloads