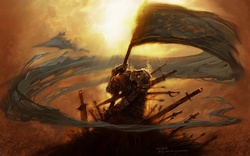 The goal is to make the enemy team lose all points, capturing points guarded by towers and protecting them from overtaking by the enemy.

There are 5 strategic points on the map: "Windmill", "Lumbermill", "Gold Mine", "Forge" and "Barracks". Each point is protected by the tower. When a tower is killed, a random one belonging to the invader is created.

There are 5 types of towers:
Watch Tower - shoots arrows (piercing type of damage) and has a passive skill - a chance to crit.
Tower of Cold - fires the cold magic and slows down the movement and attack of enemies. It also spawns up to 3 ice elementals that also have a slowing aura.
Infernal Tower - fires fire magic and spawns up to 3 lava spawns, which also burn all nearby enemies. The tower itself causes increased damage depending on the distance to the target (the farther - the stronger).
Earth Tower - throws stones (physical damage) and at each attack slows down the target. Spawns up to 3 earth golems that have a chance to stun the enemy when attacking.
Tower of Darkness - shoots dark magic, has an aura of lowering armor as well as spwns up to 3 voidwalkers, who also attack with magic and have an aura of lower attack power.

When killing a tower, one of the 5 described above may appear. With each subsequent capture of any of the 5 towers, all the towers become 1 level stronger (increasing the number of health, attack, sight radius).

The death of one of the team members takes the team 5 points. In addition to this, the death of the hero rewards each member of the opposing team with an equal amount of gold, depending on the level of the killed hero as well as the “killing streak”. If the so-called “killing streak” occurs, each subsequent killed player brings the dominating team 20% less gold up to 20%. That is, if 4 people died in the enemy team, you will only receive 20% of expected gold for the 5th victim, while the other team will receive 180% of the expected reward by killing one of the “dominant” teams.

P.Attack - increases the power of a physical attack by 1 (works on physical skills).


There are some limitations that make this game balanced and organized:

There is a strict team set! You can not take 2 or more characters of the same class in one team. Each team will definitely have a tank, an archer, a magician and 2 spirits (dark and light), and the game for the spirit is particularly interesting because they are all from the other dimension! Spirits are not creatures from the world of the living, and they cannot inflict damage on living beings, and in turn living beings cannot harm spirits. Spirits can indirectly influence the game of the living — either cure / strengthen / protect, etc., and slow down / weaken / drink manna, etc. Spirits are invisible and possess the truesight ability, that is, in the presence of the spirit no one can hide.

There is also a so-called "balance triangle":
- tanks cause increased damage to archers;
- archers - to magicians;
- magicians to tanks.
Light spirits exist to support the entire team while the dark ones are made to kill other spirits and create inconvenience to the enemy team.

The game for spirits is important and interesting by the fact that there are some special objects created for the spirits - energy crystals, which every 90 seconds spawn at a random place on the water, and killing them gives the whole team permanent stats that last the whole game and each captured crystal gives more and more bonuses.

Each of the classes has a strict limitation on the type of ammunition, which is written in the hints field (F9). All items best respond to common sense: for example, magicians cannot wear heavy ammunition, but they can wear staffs, rings, mantles, and other types of magic vestments. When choosing a character, stores are created where you can buy items for your hero. These stores are signed by the appropriate character class. Unable to buy 2 or more things of the same type. Also, items from one set are collected in one set, opening up opportunities for buying new items and giving bonuses. In addition, it is possible to improve weapons and objects in the other hand up to level 5 (for example, a sword and a shield, a staff and a ring, a bow and arrows ...), but this is not as profitable as buying a complete item, so it is strongly recommended to improve things when there is no place to put money.

In addition, some features have been added to the comeback system:
Each time a team’s points cross the hundreds line (for example, from 500 to 498), the team receives a compensation.
If one of the teams comes off on points by more than 100, then the “factory force” starts helping the losing team by creating the guards to fight the towers back to the losing team, so the dominating team have to defend them more intensively.

To avoid abuse of total domination, having entered the territory of the enemy base, the hero begins to lose his health intensively. Moreover, this “curse” can haunt him even after leaving the forbidden area.

deepstrasz
You must create a credits list in the map thread description. This is to help you: Resources in Use by PPC: DOMINATION v1.17 | HIVE Also credit resources (models, skins etc.) which are from other sites and games/compaines, sounds and music too,...
Read full review...
Reputation Statistics
Show Ignored Content