The kingdom of Teredar is in peril. A mysterious plague is spreading throughout the kingdom and hordes of zombies are destroying everything in their path. Take control of a ruler of the kingdom and defend your lands or join the darkness and annihilate all living beings.. 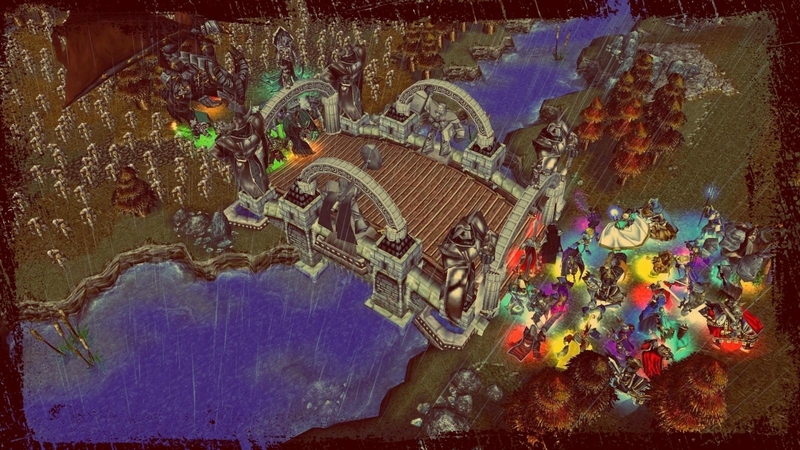 GAMEPLAY:
It's a 12 players map. 9 players fight to protect their kingdom against 3 zombie players. Units and buildings killed by zombies become zombies. When a human player has no more heroes and capital, he joins the zombies with a unique hero.
Zombies:
You must destroy the 8 capitals of the kingdom.
Each of the 3 zombie players has its own unique hero and can also each have a 2nd unique hero. It is possible to have 3 more heroes in total but it is more difficult and to discover by yourself. Every unit and building you kill turns into a zombie. However, you can also train zombies in your crypts as well as different types of special zombies. Your basic zombies have 5 evolutions to do in your Laboratory. In your Necromancy Pit you can also make special events. Undead heroes revive.

Humans:
You must defend your capitals during 1 hour.
Each player has his own unique faction. You can recruit units, make upgrades and repair your structures. Focus mainly on your base but don't hesitate to support others if you can. The coal player plays the role of the Protector of the kingdom who can teleport himself everywhere in the map to help players in difficulty; his capital is not an objective for zombies. Human heroes don't revive. Change camera distance : -cam [number]
Start a vote kick : -kick player number/player color/player name
Send ressources to allies:-give gold/soul [player number(01-21)] [amount]
Take ressources to the players who left:-take gold/soul [player number(01-21)] [amount]
Type "-share [player number(01-21)]" to give your vision and full shared control of your units to an ally. Type "-unshare [player number(01-21)]" to take your control away from an ally.
After 30min, if you are a human player and still alive, you can type "-undead" to give the control of your units to the others humans player and become zombie.
Everyone can activate and deactivate the command "-troll on/off". It only works on the triggering player's team. Also when the command is activated, it can only be deactivated 60 seconds after. When activated, if a unit attacks a friendly unit, his attack is interrupts.
Red or Grey if they are still humans can request bonus (it means that they must both agree):
"-Hard" = 5000 gold per undead player
"-Impossible" = 999999 gold per undead player
If red or grey is not played by a player or became undead, the bonus are directly activated whithout asking to the other player.
Brown and Dark Green have the same system. They can type "-Hard" to provide +2000 gold to each human player.
Type "-add time XX" and if half of the players choose -yes, the indicated time is added to the timer.

The original creators of the map are: Argos, Rex5, Guillimans
I liked the map very much but I found that it lacked a lot of improvements, additions, bug fixes, script and balancing optimization to do and the project was abandoned. So I set out to give the map a second chance. My version series takes as suffix "HEHA" and starts with :
Medieval Zombie Apocalypse HEHA 1.0.
If one of the original developers sees this message, please contact me. I would be glad to discuss it with you. I have no intention of stealing your work and hope that you will understand my simple intentions.
The map only supports classic graphics.

CREDITS
Below is an exhaustive list of people in alphabetical order who have at least one model, skin, icon or spell on the map.

CHANGELOG
VERSION 2.23 (19/02/2020)
- The bug causing the dummy undead players to turn hostile to all after a human player falls has been solved.

deepstrasz
Why am I obligated to start with cinematic scenes or tutorial? What if I don't want any? Well, at least it doesn't last that much. So basically Warcraft III spells with changed icons and names. Even armour and attack icons are changed. Is there any...
Read full review...
Reputation Statistics
Page 1 of 2
Show Ignored Content
Page 1 of 2