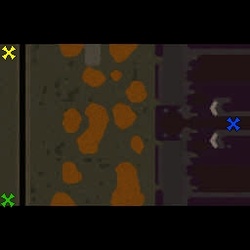 This is my newest map which I have created, my favourite too.

Its a 2 player map were one of the players would play defence and the other player would play offence. EDIT - Now playable as any team 1 player.

The aims of the game:
Defensive Player - You must defend your castle for as long as possible, the winning condition is to have the castle alive after an amount of rounds (chosen by you) of the horde. You will get a minor about of money at the start of every round, income we could say. This is done by the opposing player, you get a small proportion of their income every round. You can buy 1 of each hero from the castle.

Offensive Player - You play the horde, you do not control the horde personally, but will provide upgrades in spawn count, abilities and general upgrades to the horde. Your aim is to destroy the Castle BEFORE all rounds are over. You also get income as told earlier, your income is based on what upgrades you do, whether they are of spawn count or of general upgrades.

I do appreciate any comments or constructive criticism, and might make different playable game modes in further updates. Good Luck and Have Fun!

Imported models and icons made by:


*Update 1:
- Made it so it is 1 player if you play as the human team with the horde player as Closed.
- Changed costs of some of the unique upgrades
- Added tips, and possibility of extra income.
- Removed starting mechanical units, they are still buy-able just not ready placed any more.
- Fixed bug of horde units stopping instead of attacking the base.

*Update 2:
- Fixed spelling errors of Zersus to Versus, and hole to whole. Only ones I noticed.
- Added 9 more tips.

*Update 5:
- Changed Rain of Fire ability on the Dreadlord to Slow.
- Made 1 player defending more difficult.
- Made the defending team be able to choose the amount of rounds to survive (30, 50, 80 or 100)
- Made more heroes for humans, made it so there is a ranged hero and a melee hero for each tier, higher tier heroes being better than lower tier heroes.
- Made Upkeep affect hero xp as well as bounty percentage.

*Update 6:
- Completed human heroes so now started on undead ones.
- Made upgrades affect more units: such as FMJ affecting both flying machines and walkers.

*Update 13:
- Fixed beginning problem (round choice never was given :/)

*Update 14:
- Made observers able to vote for a winner, or not vote if they wish. Voting for a player will make them allied with that player, if they don't vote then they are given full vision over the map.
- Made fix to Human AI so they return to the castle if its attacked (which they didn't before).

*Update 16:
- Made strings include player names.
- Made players which leave change to have AI names. (Human AI, Horde AI)

Things to do:
- Finish undead heroes. DONE
- Add extra units for human when upgrades are fully complete. DONE
- Possibly add AI for the human team, make it able to play as horde 1 player. DONE
- Add tips about use of observers.
- Possibly add extras (game modes etc) which observers will choose (such as double damage round or double XP round)