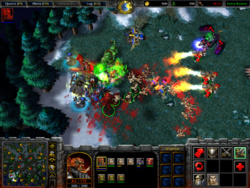 My first altered melee map. It is made out of what my friends and I are thinking about. Sometimes it is really weird stuff.
The story hehind all this is that there were four nations: Justlandia (select "Orc"), Phillage (select "Human"), Daniopolis (select "Undead") and The Neutral Ground (select "Night elf"). Daniel, the mighty Conquerer, conquered the whole world and called his land Daniopolis. One day three annoyed peasants started a rebellion. They were called Justin, Ludwig and Philipp. They destroyed the state of Daniopolis. After they had won their freedom Justin and Philipp disagreed with each other in everything. Then they started the great war. One faction, The Neutral Ground, led by their friend Ludwig, stayed neutral. His goal was it to make sure that the rules of war won´t be broken and that the beautiful friendship the four of them had won´t suffer under this war. In the end he joined the fighting anyway.
Justlandia: A country full of factories, nuclear waste and mutated people.
Phillage: A normal country, except from the clever population.
Daniopolis: An old country which ones ruled the world, but then was completely wiped out. Now it wants to get his old strength back.
The Neutral Ground: A group of enviromentalists, trees and other protectes of Mother Earth that want the world to be greena again.

IMPORTANT! The AI is not working so you have to play it against another player. I´m sorry for that. I just dont know how to use the AI Editor.

I hope you enjoy my map and please leave feedback even if it is bad. But please don´t make me cry.

This is the fifth version of my map.
Our YouTube channel: Müffelsud Productions
My other map:
Island Expedition

PS: I am from Germany so I hope there are no grammar mistakes.

deepstrasz
What kind of name is that? What does it mean? Items shouldn't be chaotically placed in with upgrades. Weird to have a non-last tier building with only one unit inside and no upgrades (referring to the Barracks). Only one hero with usual Warcraft...
Read full review...