ATTACK of the BRAINLESS 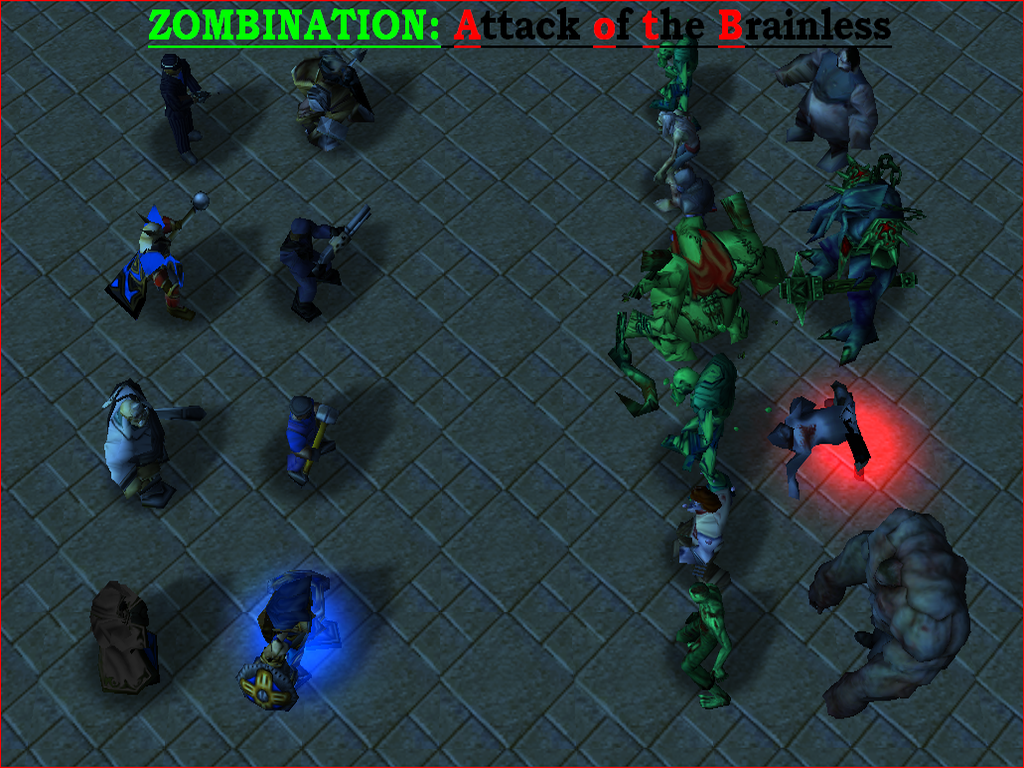 This bundle is marked as approved. It works and satisfies the submission rules.
View usage Statistics
ZOMBINATION: Attack of the Brainless [AotB]
Map Description

A hero survival and item crafting map. Player heros must survive against the undead hoard of zombies. Choose one of eight professions for your survivor: the SWAT, Chemist, Engineer, Mafia, Priest, Miner, Doctor, or Electrician, and work together or alone to survive until evac. Map is best played with sound on and shadows off. Map is unplayable on Mac OS. Tips/Recipes/Credits in F9.

At the height of a pandemic, a doctor attempts a unauthorized procedure to cure the patient, which results in a terrible biomedical accident at the laboratory. While the town attempts to contain them mutagen's outbreak, ultimately it is up to each survivor to determine their individual fate. As a survivor, you must work together with fellow survivors, or alone, to survive the pandemic until a helicopter arrives for evacuation.


Survivors have a array of options to combat the viruses spread. Base hero attack, powerful abilities, and unique items can be used to deal overwhelming firepower to massacre undead hoards. Survivors can find, buy, or craft items used to temporarily, permentantly, or artificially boost player hero stats, deal vast amounts of dps in-point or aoe, and to heal the hero and cure the infection. Survivors earn expirience and points with each undead bastard vanquished from existence.


Survivors must work to contain the spread of the mutagen. The longer the undead hoard is kept at bay and the infection contained, the greater the odds of survival. As the game advances, the undead hoards gain in strength and number--ultimately elite, special, and then ultimate zombies join the fray. Unique zombie types include those inspired by Left4Dead.

And remember, survivors, don't get ZoMbIfIeD.

-- Created by me, FSK, in 2019/2020. This is my contribution to the WC3 custom game community I've got so much enjoyment from. I hope y'all like it. Eager for feedback

-- This map was created by modifying the unprotected and assumed open source map, ZOMBINATION, originally created by The_Spoon 2010. The release of this map seeks to celebrate Zombination's 10 year anniversary!

-- I attempted to contact The_Spoon on numerous occasions on Hive over numerous years. Spoon has been active on Hive numerous time since I reached out, and unfortunately I never heard back from him. Therefore, I assumed he was okay with me editing the map, and I proceeded with editing it. I spent a lot of time/effort on this project, and feel that this does Spoon's work justice (see below), and feel that I made reasonable attempts to reach out to him and since he never responded and the map is open source, it is acceptable that I used his map as a base for this map.

-- This map is intended to be a complement to the vanilla Zombination, not a replacement. The core game concepts are different, and the strategy and game play are unique to both maps. I highly recommend playing vanilla Zombination if you haven't. It's a great map. Thanks for your work Spoon, it was the inspiration for this map.

-- This project was not a simple edit of Zombination. Major changes have been made, including the addition of over 10 new zombie types, over 25 custom spells (some created by me), over 50 new custom items, the addition of 3 more abilities to each hero, the addition of unique systems to improve map expirience, the addition of 5 new heros (survivors), and the expansion of the map to include new unique areas, among many other changes/additions.

-- I consider this map complete. No plans for minor edits other than potential bug fixes (no major bugs expected, this map has been in beta for 6 months and throughouly tested).

-- It's possible I will release add-on content in the future, such as new item types, new heros, new zombies. No structural/major changes to map map would be made--this map is 'complete'.

DEAD FISH—Zombie on a cross

ATTACK of the BRAINLESS (Map)

deepstrasz
The cinematic tag is for cinematic only maps. The Shooting/FPS one is for actual shooting maps. This one doesn't have any special gameplay mechanics. Slingshot has no DISBTN and the icon looks like a green square when disabled or on game pause/F10...
Read full review...

Maps 4
@TheSpoon what do you think of this?

Maps 4
The cinematic tag is for cinematic only maps.
The Shooting/FPS one is for actual shooting maps. This one doesn't have any special gameplay mechanics.

LEAKS
Triggers - Memory Leaks and Custom Scripts
If you're not satisfied with the review and wish another opinion, contact the other reviewers or use the staff contact:
Shar Dundred
Paillan
Alexen
eubz
https://www.hiveworkshop.com/forums/staff-contact.692/
Last edited: Oct 12, 2020

Wow, has it really been 10 years since Zombination came out? It's been so long. I've found much enjoyment out of this map from when it was in development and I'm glad to play the final product. I've beaten it multiple times with mostly every character except for the engineer with my favorite being the Doctor. My only complaint is that abilities that were really powerful and fun to use were nerfed or not buffed until by the final product. The chemist being a fine example of this. No longer does the chemist have any useful abilities, but also he's a pushover, an easy target. The items are fun to use and many items are viable. I will miss the exploits that allow you to kill the monsters before they get out of the cage. This is a fun game that not many people want to learn. It's not very noob friendly because the concept seems to be somehow novel to most people (despite zombination being a 10 year old game). Hopefully more people will come to play it, but the game should be able to entice people to learn about it. Most likely people leave because the win isn't easy at first. The game's difficulty is a step up from the original zombination with new zombies, items, heroes, etc. It's a lot to take in and it's really easy to die unless you start toming at the beginning. If you don't start toming at the beginning, the top part of the map gets infested with zombies and it's impossible to mass buy toming items. However, I think the creator wanted people to scavenge the items from houses. I don't think new players can do that because most players don't even read the F9.

I hope the final game will be balanced to take abilities into account instead of having to rely on items. It's been a really long journey and I know FSK wants to be done with this game. I wouldn't mind him taking a break before re-balancing. The game also needs to coddle new players seeing as they can't read the F9.

Good game. I've enjoyed it for many hours.
You must log in or register to reply here.