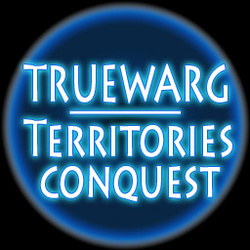 TRUE WARGAME: TERRITORIES CONQUEST 1.06.c
Being inspired by some gameplay encountered in games such as The TotalWar series,the Romance of three kingdoms series,Battle for middleEarth Wargame and some others,i decided to build one on my own featuring a conflict of great scale with a battle between several forces on a great Geomap representing a world.

TRUE WARGAME: TERRITORIES CONQUEST is a single player campaign using the custom campaign Editor Ability to link maps together to actually design a Wargame.At such this campaign is not a succession of story driven chapters unfolding one after another.This is a Wargame,Depicting The territorial Conflict Occuring in an Unknow Continent Wich itself is Part to an Unknow World. and wich Oppose Eight Separates Factions belonging to Different Races(Some are Allies though)and a total of 4 Forces opposed to each others: The Standart alliance of Humans,elves and dwarves is the first force ,the alliance beetween Orc,Trolls,Minautors is the second force and then there is the Two stand alone factions wich are quite powerful by themselves and doesnt have allies: the Demons and the Undeads.

The Main idea around this campaign is to propose a gameplay with two main aspects:

First> a turn by turn gameplay in a main map/Strategic Map/MetaMap divided in 30 territories with one colony inside for each of them,every faction begin the game with the same amount of starting colonies (with a maximum of three) the remaining colonies are left to conquer,the goal is to capture the colonies of every enemy factions,to do so you may acquire, and devellop your initial colonies,collect ressources ,research technologies, build your military forces as well as your defenses,Wage war on your enemies to capture their colonies or defends against savage attemps of enemies to capture yours.

Second> Once a battle is initiated a battle map representing the Territorry/Colony where the conflict occurs is loaded and the gameplay become a real time strategy game ,there the player will be most likely in familiar ground but with some significant differrences:there will be no ressources collection,no base buildings or structures construction,every structure present on battles map would have been constructed previously on the main map,the units available would be the one your armies would have brought on the battlefield,the battle duration will be timed. as well as some other features

Revolving around those two gameplay axis there is a custom ressources system such as the population in colonies wich are the backbone of every force,basically without civilians a faction cant accomplish much,they are the man power for armies, the workforce for ressources collection and for military Supplies Manufacture.
You start with a set amount of civilians and one of your objective is to multiply their amount by collecting the corresponding ressources and expanding your territorries.The Collected ressources by civilians or prisonners(made from some enemies factions) are extracted from ressources depot inside the colonies and they have differents incomes depending of the faction/race exploiting them.The Military supplies ressources manufactured by civilians in colonies without wich it is impossible for the armies of a faction to wage war.

A lot more Aspects of the gameplay remains, only waiting to be uncovered inside the campaign,something is certain however, overcomming the obstacles to win the great conflict is not an easy task,one must me patient and insistent to defeat stubborn resistances,targets must be choosed wisely and belongings not left undefended for each little victory is hard gained and when the victory seems near the defeat may always come from when it is less expected.


Features
• Playable with the PATCH 1.26
• Turn by Turn gameplay in a great multiterritorial map divided between players/races/factions,the player must consider the main map of this campaign as a board game with a lots of features to acknowledge.
• Custom systems of ressources acquisition,building construction,troops training and Armies deployment linked to colonies built in territorries under control.
• Slow paced game made for players understanding the gameplay,there are sometimes when the computer seems inactive for long period,but before thinking the game is broken,you have to always check its colony devellopment as well as its economy and also keep an eye on its troops gathering.
• A maximum of three premade Heroe-armies(Heroes units being the generals of their respective armies) that may be trained from altar type buildings in colonies.
• Custom Realtime strategy warfare including amounts of troops and military supplies brought on the battlefield by each army respectively,reinforcements armies that may pop in battle after delay depending of their positionning in the main map.extended opposition between invaders and defenders for the control of the territory.the well defended colonies are almost invincible, most of the time invaders must just attack enemy colonies relentlessly reducing their defenses battle after battle ,turn after turn and if possible do not give them respite nor time to repair or reinforce to obtain victory.
• Super units-like that can be invoked in the battlefield by a massive cost of military supplies.
• The game difficulty in the campaign screen is meaningful,the Enemy computer contolled factions get diverses bonuses mostly in ressources and troops (eventual friendly factions get a little less),the Hard difficulty is quite unfair in that regard due to massive bonuses given to enemy factions.


Many models downloaded over the years working on this campaign with some others models taken from maps i cant even remember,i will try to credit the most but in case i forgot something,send me message if you recognise model the author have not been credited i'll add his name in this list.[/COLOR]

deepstrasz
While this needs enhancements, much work has been put into it and honestly we don't quite have something like it. Approved. (previous comments: TrueWargame: Territories Conquest 1.03)
Read full review...
Reputation Statistics
Page 1 of 3
Show Ignored Content
Page 1 of 3