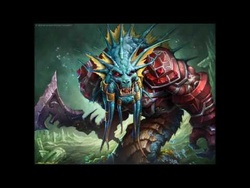 Hello! I present you my map Ruins of War
Choose one of 36 heroes to progress through, fight the enemy units and bosses in order to get levels and items, the goal is to reach the end boss and kill him.

Team up with up to 7 teammates to progress through, a balanced team composition with healer, tank and dps will help you have easier times against bosses and enemy ambush. The map and the bosses have patterns which when learned become much easier to overcome certain boss or place, the map is designed to be very hard at first runs. Heroes are designed to be different and although some may fullfill their role better than others, all should be unique.

The Story
Before anything existed there were two gods, Karus the god of war, and Jiakos the god of peace. Due to their different nature they battled for ages untill Karus came out victorious, but his energy was cursed during the battle, he was dying slowly so he had decided to make his own world so there would be always a part of him living in the unvierse, he used his last energy to create this world hence the world of Karus. This is what everyone knew about the world they live in.
The world of Karus has always been in peace since its creation. It consisted of 3 realms, The Divine, The Nature and The Abyss, even though the creatures inside it were so different from each other they could coexist, share wisdom with each other and even enjoy each others friendship. However even with peace on their side, the world of Karus was falling apart, even the energy was stagnant, it was slowly rotting, the kings of the three realms were always seeking for answers about the truth of their world but never found anything. Because their world was falling apart, the king of the Nature realm decided to resign from the throne to seek wisdom in the depths of the ocean. He was called King of Tides. After spending many years in the depths of the ocean, he was enlightened with the truth about their world but refused to tell the other kings, instead he conspired with their champions and overthrew the other kings and rise as the sole emperor in the world of Karus for the first time ever in its creation, the world had only one "King". Because of those actions, war had emerged and peace was no longer, the realms couldnt agree with the single ruler so there was constant fighting and battles to overthrow the king of tides, but no one succeded. In Ruins of War you play as champions from the 3 realms in order to kill the King of Tides and find out about the truth about the world of Karus.

deepstrasz
It's OKish but you should improve it over time, make enemies and boss fights more engaging and unique, work more on spells and their icons. Approved. (previous comments: Ruins of War)
Read full review...
Reputation Statistics
Show Ignored Content