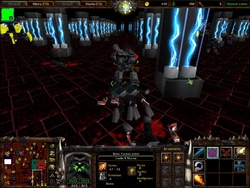 Singleplayer third-person camera futuristic sci-fi/horror map partially inspired by the atmosphere and setting of classic shooters like Doom or Quake.
The goal of the map is to survive until you find the exit to escape the dungeon.

deepstrasz
1. Too many green icons even the hero's. Please learn how to import or make DISBTNs: Button Manager v1.8.2 BLP Lab v0.5.0 Complete Icon Tutorial - All About Icons How to Make an Icon 2. Also learn how to write a proper ability description: Tooltip...
Read full review...