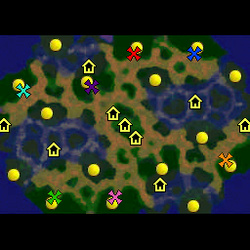 General notes about the map:
Many 4v4 follow a layout where players are placed essentially in a circle around the center of the maps (Market Place, Twlight Ruins, Mur'gul Oasis, Deadlock, ...). So of the four players on a team, there are typically two protected central players in the middle of the team, and two more exposed players on the side. Typically, there isnt much difference between both central players, and the same holds for both outside players.
I wanted to create a map where each of the four players has to face a strategic situation that is different from the other players on the same team, and also somewhat different from most other maps. So, what are these?

-The purple/yellow (missing on the automaticall generated minimap) starting positions are central, but on this map they are the ones who are closest to the other team. So I expect that they will be the ones who will be the first choice as a target for the enemy player. But dont be afraid to invest in a few towers: Their goldmines have an extra 2500 gold in it, so if they manage to hold off the enemy attacks, you will be in a good position to win wars of attrition. This also serves as an extre incentive for their teammates to help defend them. Alternatively, they can also take the fight to their opposite number. And while expanding might be difficult if they are under permanent pressure, they can chose between three possible expansion locations.

-The teal/ orange position probably have the most options available to them, but should probably focus primarily on taking the fight to the enemy. They can choose between three enemies to attack early on. Alternatively, they can take a safe backdoor expansionor take the more adventurous route of expanding towards the enemy. If the blue green players expand to the sides, then teal/orange are the only ones who can realistically punish them early on, so scouting should not be neglected. It might also occur that the enemies chose them over purple/yellow as a prime attack target.

-The red/pink position have a very safe position, as they are somewhat hidden between purple/yellow. They are unlikely to ever be under direct attack. If they want to, they can play a relatively passive and quiet game, possibly teching quickly or expanding. But they shouldnt be lured into a false sense of security, the game can be lost even if no enemy ever finds his way into their bases or expansion.S o they a lot of freedom, but they should be ready to help their team, especially purple/yellow, at any moment.

-The blue/green players are the only one who are in a true corner position. Expanding looks very attractive, especially as early one, normally only teal/orange can harass. In particular, they are the only ones who have an expansion available which none of their teammates will claim early on. Or you might participate in an all out rush on purple/yellow. They are the only ones in their team who are far away from the safe backside area in the top left/bottom right, so whatever they do, it will inevitably lead them closer to the enemy.


About the creeps and neutral buildings:
The creep placement mgiht seem chaotic, but actually there is a system behind it.
All players have green satyr camp and an orange dark troll camp next to their starting position. These will give your first hero roughly level 2 and a bit. Then, for each player there is an expansion with another green camp nearby. But most of these expansions are not clearly allocated ot a starting position, so the players should communicate with their teammates to avoid confusion (which is of course a good idea for 4v4 on any map). Alternatively, there are several creep between starting positions, which teammates can share, or "contested" creep camps on the lowground and at the central lab. And a safe backdoor area in the top left/bottom right with a merc camp, which however will not enough resources/creeps to sustain an entire team of four players.

Update on 16.03.2020:
-Major terrain overhaul to (hopefully) make the map look good in both classic and reforged.
-Redesigned the central creepcamp: New and much stronger creeps and itemdrops. Dragon roost placed there in addition to the goblin lab. Added gates to prevent units walking past this creepcamp.
-Relocated several of the Dark troll and satyr creepspots near the main bases to make their distance to the respective main bases more equal and to indicate more clearly which camp "belongs" to which base.
-Changed the creeps accompanying the infernals at the red creepspots on the outsides of the map.
-Downgraded the itemdrop at the merc camp from lvl 4 charged to lvl 3 charged
-Renamed the map to "Corrupted Forest".
(-Maybe some other minor changes that I forgot about)
-Uploaded this version in addition to the existing version which was submitted to the contest originally.

Update on 31.03.2020 (Corrupted Forest v1.02):
-Reworked center again, now it is back to the original troll creeps, but with a market place.
-Added goblin labs at the furbolg camps which previously had no neutral building.
-Removed gates in the center. Added trees instead, so that it is less likely that scouts walk past the central creeps.
-Also added some trees near the new labs for the same purpose.

Big thanks to @Mr.Henci , @Granite_Golem and many others who helped me improve the map.
Previews