This bundle is marked as awaiting update. A staff member has requested changes to it before it can be approved.
View usage Statistics Legacy download
Reactions: deepstrasz, Fleck, Spellbound and 1 other person
Burnings frost souls clan

How to play: if you want to play for Burnings frost souls clan choose human

lore: Burnings frost souls clan never was among the good races, but not among the bad race too, tends to be in between them. Clan members represent one of two elements fire or ice. But clan leader represent both of them and thats why he is members follow him, because it fulfills both prophecies of ice and fire.With his leadership, the clan will not end, but he will become the hegemon of his age, first age ! 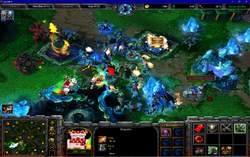 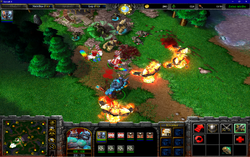 deepstrasz
Pretty much regular Warcraft III stuff. Basically, an edited Human faction. Tentacles are quite useless and expensive, weak and low ranged. I suggest adding an ability with cooldown for them to be moved around from place to place within a certain...
Read full review...

Icons 1 Maps 4 Templates 1 Ported Icons 1
Disclaimer : this criticism takes in account the fact that the map is in a state where it must be bruised before being stable. I could be harsh but I can see potential here. Everything I say will become irrelevant once changes are made, or if you take an other path someway.

TL;DR : way too incomplete to be a proper Wc3 faction, despite flukes of badly exploited interesting ideas.

Replays
In the first game, I played normally without getting too hard.
The second I spammed T1 units.
The third I spammed T3 units.
The only strategy I found is outproducing the enemy, since your faction doesn't have much variety and combos.

Initial defenses ?
I don't know if your faction is supposed to have a weak start, because this is how you can do both a weak and incomplete start. Humans have militia, undead have ghouls and blight, orcs have burrows, elves have moon wells, ancients and exploding wisps, your faction have... nothing. Even the main building have weak defenses.

Burning archer
Light armor ? Burning aura ? I see it quite unbalanced. It's melting under ranged fire (ranged are supposed to tank other ranged), and making them close on combat crumbles their low resistance. In late game they deal a lot of damage once upgraded.
☼ Side per dice from 9 to 6
They would still be decent for early game without punching too hard late game. They would accomplish their ranged role as intended !
☼ Armor type from light to medium
☼ HP from 285 to 330
As they are more expensive than a Vanguard on raw stats, it would be coherent to give them more HP. Still, the archers would be weak against melee.
☼ Mana from 300 to 0
☼ Mana regeneration from 0.75 to 0.433/s
☼ Starting mana from 300 to 50
☼ Flame arrows upgrades mana boost from 0 to 300
☼ New T3 upgrade at the Concentrator of War to increase mana regen of archer from 0.433 to 0.8
☼ Flame aura damage per second from 10 to 4
☼ New upgrade T2 upgrade increasing the flame aura damage from 4 to 8
Until Tier 3 it have useless mana, making the game less balanced since there's mana stealers/burners.
They spawn with full mana, which have too much impact on production. So by reducing its starting mana they can still nail yet some flame arrows after creation.

Oni
Well, that's your only siege unit... which is weak to towers and ranged. Fire breath could be too devastating but since it's getting melted by ranged units, it doesn't hit many times. Here's the changes I would suggest :
☼ Breath of fire damage from 150 to 50
☼ Breath of fire range from 800 to 350
These would reduce its power while keeping its splash intent.
☼ Hitpoints from 500 to 1100
☼ Armor from 0 to 2
☼ Armor type from unarmored to heavy
☼ Base damage from 26 to 30
☼ Number of dices from 1 to 3
☼ Sides per dice from 4 to 6
☼ Gold cost from 195 to 220
☼ Lumber cost from 32 to 40
☼ Range from 100 to 120
A more interesting siege unit !
☼ Muscle upgrade life increase from 150 to 200
☼ Muscle upgrade HP regen increase from 0 to 1/s
It's a tank, you idiot !
Then, If you want to make it a siege unit, give it a siege ability. For example to stun a building in distance, or burn then in AoE. Finally, I would suggest a defensive ability, for example a self heal, hard skin, resistant skin, and maybe unlocked through upgrades. It would benefit your content.

First of the fires
Abriged to FotF, this elite unit can take care of many things by itself, except magic immune targets. Your lack of air units could benefit from making the FotF an air unit. Like the other creeps you copied don't forget to set the mana to melee units range. It starts with 500 beefy mana ready to be spammed.

Deposit
This one is a tough nut to crack. It have the advantages of using items but the rest is severly lacking : weak in battle, debuff allies when killed, too expensive for its use. In late game you won't have much items so having a secondary hero-unit isn't very useful. I can see two opposite workarounds :
1) Make any elite units able to use items and delete the deposit
2) Make the deposit stronger and getting stronger when fighting/killing units, plus making them able to be resurrected.

Other advice
Don't stop making maps. You still have a long way to go. Polish every single details so it will transition smoothly : icons, texts, duration, bugs, and so on. If you want we can take some time discussing and helping you sorting these ideas into a concept.

That's all for today. You reached the bottom of the post, congratulations !

Icons 4 Maps 4
Hi ok I tested the map and some ideas from this new race are good but there are many bad things too:
-some descriptions for units, buildings, or abilities are pretty bad
-lack of hotkeys :you need to add Ex:|cffffcc00C|
-only 1 hero :if you want to make a race with only 1 hero you will need to make him pretty powerful otherwise you will not be able to win vs players that will have 3 heros
-about your defense tower the Tentacle is very weak: 120 gold, 380 hp, 0 armor, the dmg is ok, low attack speed and low range attack. You can easy destroy this tower with some range units.
-the first skill for your hero is not working: lev 1 is not working or the time is wrong because the effect will not last 10 sec
-like FlameofChange said in his review the unit Deposit is very weak and strange in the same time. His attack and defense type are making him a mini hero but the upgrades will not increase his dmg or def. And that skill with -40% dmg is very bad, the idea of this skill is pretty nice but not for this unit.
-the Oni unit is suppose to be the tank of your race but his armor type is unarmored and his hp is only 500.
-maybe you should change the sound for Ice Rock building, I mean the sound of the Banshi is not very fitting with a rock of ice
-maybe you can add some more units to your race because so far there are only: 3 melee units, 2 range units and 1 flying unit.
-also maybe you can find a better model for you Ice Cave building and maybe a new model for Great blue watcher (because the model for this building is more or less an animation for a good skill)
Well this is all, your race idea is pretty good and original, I really like some models from your map like: Warmed soul, Ancient monarch , Despotist.

Skins 11
well i don't know altered melee since i am not a good at melee these day
Until I saw my boy Oni on the screenshot and i shout.

LEAKS
Triggers - Memory Leaks and Custom Scripts
If you're not satisfied with the review and wish another opinion, contact the other reviewers or use the staff contact:
Wazzz
Alexen
https://www.hiveworkshop.com/forums/staff-contact.692/
You must log in or register to reply here.