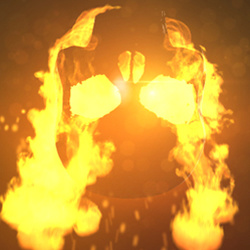 
Join an arena up to 6 skeletons in a FFA fast paced battle royale.
Host will determine lives at the start of the game by typing "-lives xx" (xx being the number of starting lives), and also can type "-dps" which will periodically damage every skeleton on the map.
Shot others down with your burning arrows, jump around, outplay.
Feast on burning souls shard to regain hp, kill players to gain max hp.
Avoid going into hellfire walls as they oneshot.
In the middle are the 3 cursed blademasters, spinning forever dragging you in and finaly slashing you with their blades.
Fire circles teleport your arrows from one to another.
When burning souls die they damage in a circle of 175 AOE for 75 damage and knock you back quite a bit.

NOTE: Killing the item carrier makes the game much more interesting. The tiny "critter" carries a bow of amazing fire.

deepstrasz
Great thing now you can open multiple instances of Warcraft III.exe to test LAN. You should put the camera over the player hero instead of to a random location/center of the map. Hero glow? How to add Hero Glow without Modeling Changes made,...
Read full review...
Reputation Statistics
Show Ignored Content