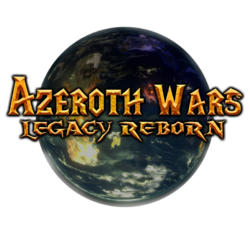 Active Community
We have an active community of regular players who regularly host both public and closed games. We can be found at Azeroth Wars: Legacy Reborn and Join the Azeroth Wars LR Discord Server!.

Control Points
Income is gained automatically over time by maintaining ownership over Control Points. Expand your dominion quickly to secure a strong economy!

Quests
Questssimulate the events of the Warcraft story in a competitive sandbox environment. Release Illidan Stormrage from his prison, summon the Burning Legion from the depths of the Twisting Nether, or don the terrible Crown of Domination as Arthas Menethil.

Artifacts
Many artifacts from the Warcraft universe can be acquired to give your heroes an edge; Thrall carries his mighty Doomhammer from the beginning, the fabled Book of Medivh can be found in the Dalaran Dungeons, and those powerful enough to do so can retrieve the Eye of Sargeras itself from his Tomb.

Masteries
Choose from one of 3 Masteries per faction to customize your playstyle with new tech-tree options.

Paths
Some factions, when abandoned by their allies, can unlock unique Paths that drastically change their gameplay experience. Choose between the Scarlet Crusade and the Silver Hand as Lordaeron, unite the Night Elves as the Sentinels or Druids, or abandon the North Alliance as Quel'thalas to form the Illidari.

Scourge
Play as the Lich King controlling vast hordes of Undead in Icecrown and Scholomance, preparing for the Plague that will ultimately tear apart the North Alliance.

Burning Legion
Control the Dreadlords Mal'ganis and Tichondrious as they lead a small force of Demons in their quest to bring the full might of the Legion to Azeroth.

Sentinels
Control the militant Sentinels under Tyrande Whisperwind's command in their mission to secure the world against evil. Free Illidan from the Barrow Deeps - or do not, and secure Maiev's assistance instead.