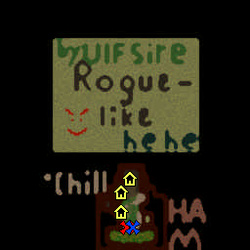 In this game, you complete randomly generated levels with a customized hero. There is no "free" life or mana regeneration - all resources are limited. Skills, Traits and Attributes are represented by structures that you build on a grid, which update your hero abilities in real time. Your hero can also worship a God, for various limitations / rewards.

Functional in both HD and SD graphics

Difficulty scaling for # of players

Skills derived from "skill structures" that you build with an Animus

Skill structures can unlock or add an effect to an Ability, all of which stack limitlessly

A piety system for various Gods

In multiplayer, allies revive if one player finishes the level

A clickable Tutorial Wisp
How to Play

To complete a level, kill the Guardian

When a level is completed, the Hero gains a level and receives +1 lumber

Use lumber to improve attributes and gain more skills. This is done by building structures with your Animus, which represent skills and attributes.

Every 5 levels, an optional boss appears that grants +1 lumber if killed

Levels must be survived, not farmed - health and mana do not naturally regenerate

At level 30, defeat the King of Many Colors to "win"

0.6.7 - some tweaks
- caused enemy scaling to increase more drastically after the slaying of a Boss
- reduced the % of damage blocked from inherent enemy resists
- added Green Drake and Marid
- fixed some tooltips
- made Mudmen only grant STR if hero is alive
- added a 60s duration to all at-will summons

0.6.5
-FIXED Master Ring now actually restores mana
-REWORK All summons now path to the guardian, then the boss, then a random point - when one is slain, they should be given an order for the next point in this sequence
-REWORK Hero cast Spell now costs 25 mana, let's see how this plays out
-Added "Stone-Speech" to Imbue->Lordship - summons Mudmen (Earth)

0.6.4
-Fixed some tooltips
-RELIGION BUFF - to make the other faiths comparable to Oros in fun and power
-Hammash now grants healing from potions of fire and an extra fireball
-Ninhurs healing from health potions increased
-Tengri now grants +5 piety from any Imbue structure as well (except Blood + Earth), increased healing from Jigari death
-Dorok now gains piety from and grants charges to potions of might
-Ani healing on unclean enemy death increased, now grants charges to potions of wisdom
-potions of wisdom intellgience gain increased
-Mot now gains piety every level, bonus damage from Astral Blessing increased
-Eresh now grants a Deathbolt on Rod of Undeath use that heals for the damage dealt, and grants 2 charges every level
-Ragara now grants healing on use of Strike or Throw, Curse protection from Cursed Blood increased
-worshipping Self now gains piety every level, gives +1 all attributes every level and a piety/chance for +2 random attribute
-FIXED Hydra regen, was accidentally getting set at some horrific exponential number
-Runes now get +1 charge every level


0.6.3
LAST HOTFIX FOR NOW
-removed "minimum distance" start point that was causing waygate bug - will be reworked at some future point

0.6.2
HOTFIX + balancing
-FIXED bug where the level 30 Guardian would be one of the minions defending the King
-lowered enemy damage universally
-gave all heroes +500 base health
-reduced the stat transfer of "Hive"
-made "Snow" and "Locumancer" less visually distracting

0.6.1
HOTFIX - a bug was introduced where the waygate couldn't be entered, this has been fixed

0.6.0
-FIXED a game-breaking bug involving attributes lowered past 0
-updated Order of Light and Death Lord structure tooltips to show scaling / better readability
-universally reduced gold drops and ability damage of stronger enemies
-added a damage-type resistance to most enemies (50%, then a flat reduction that scales with level, will be enumerated in Quests in the future)
-added Bronze Drake, Black Drake and Hydra enemies
-updated all strong (3x combos + artifacts) items to have active abilities, except Holy Icon
(example: Robe of the Stars lets you teleport yourself AND all nearby allies, Void Escutcheon summons a Shadow Horror etc)
-The Bazaar now spawns in the level
-The level start will now have a far minimum distance from the Guardian
-the Guardian can now be strong enemies (not bosses, but stuff like Wyverns, Sauroks etc)
-The Guardian will be defended by a group of enemies of a random type

TO COME: -more mechanical explanations (of Resistences, inherent enemy abilities,...) in the map, either in Quests or somewhere more visible
-more enemy abilities

0.5.9
-added hero glow
-evocations now heal on use
-toned down some enemy abilities

0.5.8 (scaling hotfix + more)
-Getting 3 of a common item will now combine it into a stronger item, with x3 effect
-Paw of Immortality (3x Claw of Life)
-Champion's Gauntlet (3x Gloves of Haste)
-Master Ring (3x Magus Ring)
-Necklace of the Stars (3x Astral Charm)
-Titan's Skin (3x Giant's Belt)
-Evocations now grant +2 charges to each held Rune when learned
-Reworked the scaling of abilities granted to Summons by your elements to scale independently of base Attack, all should now be consistent

0.5.3
-increased the power of Artifacts, to make them more worth the risk
of saving gold and killing bosses
-all damage type resistances provided by Artifacts now scale based
on game level
-improved the power of common permanent items, such as Giant's Belt
-tried to fix a bug where if all players die and one player hasn't
picked and is AFK, the game can't restart (this could have bugged
something else, and needs testing)
-Choosing "Yourself" as your God now also grants a random Artifact
every 10th level
-slightly reduced the scaling of some monster abilities
-added Call Wolf back to summoner

PLANNED: summon abilities from Blood and Earth, Spell upgrades, a God of the Void

deepstrasz
OK, played this on 1.31.1, adapted the map for it thanks to Drake53 No item stack (potions for example?) Should remove the last - from Intelligence since it says nothing after it. Can this be played in 1 player? I have a hard time facing numerous...
Read full review...
Reputation Statistics
Page 1 of 2
Show Ignored Content
Page 1 of 2