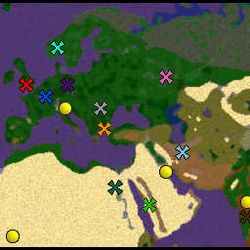 This map is an updated and more streamlined version of my previous map, "The Medieval World."

This map features new and improved terrain, the removal of the Ottomans for the Bulgarians, and a fixation on 1000 A.D. (give or take 66 years), as opposed to a general 600-1500 timeline.

The civilizations are as follows,

4. Germany - Germany plays as Otto I, a precursor to what would become the Holy Roman Empire.
Unique units: Teutonic Knight (replaces Knight) and Landsknecht (replaces Spearman)

5. Spain - Spain plays as King Ferdinand I, a precursor to modern Spain.
Unique units: Rodelero (replaces Swordsman) and they begin the game with a Cathedral

This was made in response to not originally locking my map and having it stolen, slightly altered, and immediately hosted and re branded within one day of it being up. In order to separate myself from that, I completely redid it and I think it came out far superior to the old one.

Some uniques are stretching the timeline in order to give truly unique units to their respective factions, but I attempted to stay as close to 1000 A.D. as possible.


I hope you guys enjoy!


P.S. - please don't ask me "new map, again?" Just take a look at this one and judge it for yourself.

Kingdra
First of all, I'd like to point out that the historical accuracy should be second to an enjoyable map. Regarding the maps functionality: It's fine, it works as intended with a few flaws (elaboration coming.) The looks are fine, nothing outright...
Read full review...

deepstrasz
A credits list is mandatory in the map thread description. You can use this to write one: Resources in Use by Medieval World 1000A.D. | HIVE You could write in unit descriptions what units are they good against and not. Many spells are like out of...
Read full review...
Reputation Statistics
Show Ignored Content