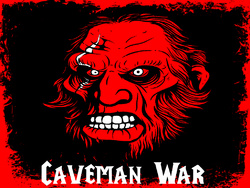 Caveman War v1.0 is an ice age-themed 3vs3 AoS/DotA style map i created from scratch due to a desire to learn how to use the world editor, it is the first time i make a custom map but i took my time to read enough tutorials and learn the basics, i also carefully tested each feature implemented to ensure a bug-free experience.

The game is about the same as your typical AoS/DotA/MOBA, but it is simpler, smaller, shorter, and with a greater focus on action, your goal is to destroy your enemie's main building before they destroy yours, the main building is protected by two towers you must destroy first in order to advance. You control a lone caveman warrior who isn't any stronger than the other cavemen at first, but you can later level up, buy items and purchase "pets" to aid you in battle. The two bases are very close to each other, the "creeps" waves spawn at a fast rate, and neutral-hostile units constantly attack both teams, the game is meant to be short but intense.

-Fast-paced, action packed gameplay:
Units spawn at a fast rate and "downtime" is very short due to the proximity of both bases, and the short waiting period when a player's hero dies.

-Score system Instead of a Kill/Death/Assist multiboard:
when you defeat an enemy you gain points, and when you die you lose points, nice and simple.

-Toggleable ability that switches between melee and ranged attack types:
This was made in order to compensate the lack of additional heroes by making the existing one more versatile.

-Equiped items show in your hero's model:
A visual feature that looks cool and allows you to know what is your enemy using.

-Neutral-Hostile units attack both teams constantly:
Units who are hostile towards both teams will spawn in middle of the battle, causing chaos and confusion.

-Team-wide power ups:
When a big unit is killed it will drop a power up that benefits the entire team of the player who picks it up.

-Free health & mana regenerating items near the battlefield:
In order to reduce the boring need to go all the way back to the base to regain health and mana, there are some "mushrooms" outside of each base, you can eat the green ones to regenerate health and the blues for mana.

i HIGHLY suggest to use custom key bindings with this map, specifically the ones who remap ability hotkeys to "Q W E R", this is because i forgot i had "WarKeys" installed, and created all the abilities while testing the map with the custom key bindings enabled, i don't know how messed up it is without custom keys but i am sure at least the button position will be weird.

- "Cavemen Rejoice" by The Bags

My map is open source and you are free to edit it as long as you don't steal any credit from me or the creators of the imported files.

I wish you have as much fun playing as i had while creating the map!
Previews

deepstrasz
Remove excess tags. It's not an Arena map. AoS suffices. Right now, the map doesn't bring anything new to the AoS genre. It's one lane based (imagine the blockages), abilities are 95% Warcraft III ones, items pretty much similar. All heroes are the...
Read full review...
Reputation Statistics
Show Ignored Content