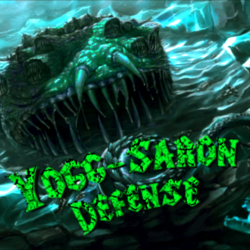 Yogg-Defense is a pretty simple map similiar to hero line wars.
You "build" your own hero and you receive a pet randomly from a pool of 20 pets.
You may learn new abilities and unlearn the last learned ability if you didnt like it.
You will learn a ultimate on level 6 that can't be unlearned.
There are some Items to support your hero further.
You send mercs to the opponents team to increase your income and eventually defeat them by killing their Yogg.

This was done for a Map-Jam on my twitch channel within 2 hours and after that i refined it a little (3 more hours) to make it "acceptable" to play. - after that the update history on hive is all that i've done.

Hope u'll still like it for the "mini-game" its supposed to be.

Update 1.03:
Added a few more not-standart items
Added 2 new mercs as "Healers" (thx too deepstrasz for the idea)
Hiding "All Attributes" when learned to make space for a 5th ability (thx too deepstrasz for the idea)
Gold will be refunded after using "Book of Skill" while having 5 basic abilities on lvl 3
Fixed a few langauge issues with the original language of my WE that i dint consider changing before
Added 3 new Spells

Update 1.04:
Hero attributes are randomized now and added special effects giving feedback on the quality of the attributes
Added 4 diffrent gamemodes + the option to change the amount of the start gold
Added 2 new mercs with a more offensive role than the previously added "healers" (thx again too deepstrasz for the idea of adding more mercs)
Moved all mercs to a new building so they are easier to find
Added small splash damage to the tentacles
Added 6 new Spells

Update 1.05:
Changed Hero Models - just higher quality models wiht more details than the standart wc3 ones
Added 20 pets that follow the same rarity system as the heroes - each pet has diffrent abilities
Added Item to delete last learened ability if you dont like it
Changed a few older items and mercs (balance changes in goldcost and stats)
Changed the way some items worked - permant power items for heroes and creeps dont require empty Itemslots and can also be bought by the players pet
Fixed a few issues with a spell based on "Phoenix fire"
Made numbers of mercs that spawn based on player numbers for better balancing
Adjusted the food/upkeep display to display players income

deepstrasz
You should avoid things like Vampiric Aura on ranged heroes because they won't give them any bonuses only to melee allied heroes if any. The mirror image item, what does the mirage clone actually do? Detail the description a bit. Burning Cleaver, I...
Read full review...
Reputation Statistics
Show Ignored Content