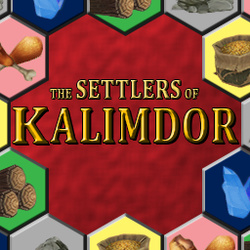 Settlers of Kalimdor is a recreation of the well-known board game "Settlers of Catan" in the WC3 engine.

Play with 2-4 players to colonize a lonely but resource rich island off the coast of Kalimdor. Establish villages, cities and expand your settlements to claim more resources to ultimately become the victor. At the same time, try to lure your fellow man into inconspicuous alliances against other players, before backstabbing them with the powers of Onyxia.


The objective of the game is to gather victory points. These are gained primarily by establishing villages and upgrading them into cities. To do this, players will need to gather resources. Resources are given to the players' villages and cities based on what types of land tiles they are established next to, and by which land tiles the luck of the dice decides will be fruitful at the start of each player's turn.

During a player's turn, they may roll for resources, trade resources and construct roads and settlements, before passing the turn over to the next player. Each player starts with 2 villages which they must establish in lucrative positions on the map to achieve victory.
Beyond recreating the rules of the board game, the map features:
- Player-customizable game boards.
- 4 aesthetically different races.
- An infuriating RNG-system designed specifically to not give you (yes you) lumber when you need it the most.
- Optional house rules.


Changes:
- Custom board creation has been updated to make it less confusing and faster to create your custom board.
- New Trading Post land tile has been added to the custom board creation; This land tile will give out random resources to adjacent settlements, and also provide better trading conditions for that resource.
- A wonderful new loading screen image has been added.
- Worked out compatibility with Reforged users (Though the map is still visually made to be played with Classic skin)
- The majority of the map triggers have been reworked to significantly reduce memory leaking.

Map made by DrunkenDirt, please do not edit and distribute versions of the map without my permission.

If you're interested in more board-game adaptations in WC3, check out my version of the hidden identity game "Secret Hitler" here.

deepstrasz
A credits list is mandatory with at least the names of the users whose resources you've used. This can help you write one: Resources in Use by Settlers of Kalimdor 1.0 | HIVE Awaiting Update. If you want more reviews, you should participate in the...
Read full review...

eubz
Settlers of Kalimdor 1.0 Submitted by DrunkenDirt [IMG] SHORT REVIEW 1. The idea for the map is very good. I like how you use resources in order to grow. 2. Triggers are well organized but I see location leaks and there are so many of them....
Read full review...