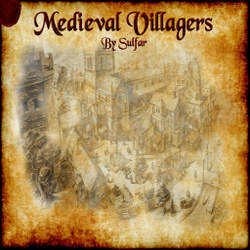 You live in a dangerous medieval province and you decide to leave everything behind to embark on a epic journey full of friends, enemies and opportunities. History is in your hands, what path will you choose? Will you be a deadly thief, a noble, the next king or a mighty hero?

Overworld Objectives
Dark forces have overrun the southern town of Runestone with only a small garrison of soldiers holding the hordes back. Push the undead back to whence they came, or give in to darker forces...

General Creep Camps
These have been added mainly as a method of gaining experience and giving some more variety for late game shenanigans. Some of these camps may hold unique prizes for those who can best them...

Regional Changes
Each of the starting areas has seen slight cosmetic changes, as well as a slew of balance changes. Starting zones outside of the capital have been given access to more industries to help boost periodic income. Banks, mercenary camps, and markets have been added to all regions that did not have them previously. Each of the starting zones have also been given a powerful Empire hero to help defend them from rebels and beasts. Each of these units drops a unique item.

Note: If your name doesn't appear in the list and I used your resources contact me and I will add you to the list
Contents
Reviews

deepstrasz
Alongside the original and write a credits list. This helps: Resources in Use by Medieval Villagers 1.08e Open source | HIVE There are a lot of names to write. Awaiting Update. If you want more reviews, you should participate in the The Grand...
Read full review...

deepstrasz
Why does the filename have a "1." before the actual name? Play music using the other trigger so it won't pop out through the sound channel. Unit training does not look like a passive ability even if it is. You could make the icon so with this: Button...
Read full review...

noob2
I have a question about the map: What is the counter against a player without villager that kills the king then destroys the crown?(there is nothing killable that ends that player unless you start killing all he owns which can be extremely long if it...
Read full review...

Alexen
Well then, here goes my review for this. [IMG] My rating for your map is 3/5 and vote for Needs Fix. Check this out : EmberCraft ARPG v0.10.773 for some inspiration. It's my favorite RPG map for Warcraft 3. Improve what must be improved and I will...
Read full review...
Reputation Statistics
Page 1 of 2
Show Ignored Content
Page 1 of 2