This bundle is marked as useful / simple. Simplicity is bliss, low effort and/or may contain minor bugs.
View usage Statistics Legacy download
Reactions: deepstrasz
Overview
So out of all the games my brother and I used to play on battle.net, World War 3 Euro was my favorite!!! Constant battles of 100's & 100's of Taurens, then casting invincibility at the perfect moment lol. Heroes that leveled up forever, and not having to worry about any flying unit strategies (think Braveheart).

The problem is now that nobody ever hosts it anymore, so I figured I would make a single player / co-op version. What a journey it has been, I've been working on this for OVER A YEAR now.

Basically it's just like normal Warcraft 3 except: NO FLYING UNITS, so everyone should know how to play lol.
Also there is UNLIMITED FOOD, and INFINITE HERO LEVELS.


Map Layout
CO-OP: Teil is your computer ally no matter what. So it's teil, red, and blue vs 11 computer players. 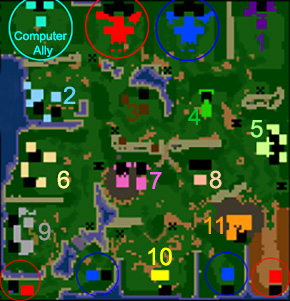 Single Player: If you leave player 2's slot empty, or set it to "Closed" you get all of blue's buildings.
Or you can set player 2 to "Computer" which I recommend since he can make Chaos Taurens (unlike player 3 teil), and you will get blue's expos.


What Makes This Level Special
So why did it take me over a year to make this? Well I programmed in a new type of computer Ai which includes:

* Smart Ai heroes: I made triggers that have them cast their spells constantly, and they are always leveling up so you can't pawn them.

* More computer units: The computer wasn't smart enough to make 100s of Footmen, or Taurens like what you're going to do, so I programmed a way for them to do it.

* Better computer bases: It was too easy to kill their bases, so I programmed them to make more towers than usual. They also weren't good at making expos, so I programmed a way for them to do that better as well.

* Nuclear bombs: type: NUKE at the beginning of the game, and after 8 minutes; you and your enemies will start to automatically get Goblin Sappers that can cause a giant nuclear explosion. Best to use them on their bases.

* Bosses will appear if you kill any giant towers (there are 2). The bosses will then invade player 1 and player 2's bases. Kill Archimonde to win the game.


What You Get
To make the game more fun and more possible I gave us some features:

* Random hero generator: there are 6 different heroes and you will automatically receive 3 of them at random within the first minute and a half of the game.

* Every hero has a blink blade, and a scroll of teleportation with infinite uses.

* The Tauren Chieftain and Mountain King get an item with a few uses that shoots lightning at usually tons of units, causing 2000 damage to each unit.

* Every hero has a super special level 9 spell as well as the normal level 6 spell.

* You start with a decent little town so the beginning of the game isn't boring.

* You start with expos.

You have to kill about 3 players at the very beginning or else they just become too powerful. Make sure to try and kill all their peasants, and hopefully their barracks and alters as well.

Bottle neck tight passages to your base with tons of units and make sure your heroes are there leveling up. Once you get to level 6 you can finally start killing more players.

It's hard push in this level, so one trick you can do during co-op is have one person defend the main bases, while the other goes and kills a base.

On easy and normal modes they can't teleport but you can, so teleport to your expos and do a hit and run. Sometimes they have to run across the whole map to defend their base.

Build a lot of towers below your base and spread them out. This will prevent your base from being nuked.

Coordinate with your ally and if you send two nukes at someones base it should get annihilated.

If you send a couple grunts, taurens, or even peasants at their base right before you send the nuke, it will distract their towers from blowing up your nuke earlier than expected.

V133: You can now type HARD for hard mode. We tested it co-op and beat it on hard with both nukes, and without nukes.
V134: It felt too easy even on hard mode so I made every mode a little harder.
V135: I added a HARDEST mode option.
V141: Fixed a bunch of things. Hardest was too hard, made less fountains, and Single Player has completely been revamped. 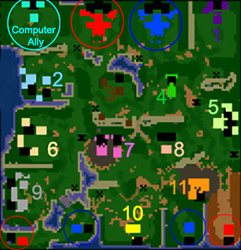 deepstrasz
Don't spam map tags please. Choose only the fitting ones. Is it Open Source? Are other people allowed to edit and upload this map? Secret Town Portal has no description. The techtree is just the usual orc one and heroes have some spells changed and...
Read full review...

Maps 4
Don't spam map tags please. Choose only the fitting ones.
Is it Open Source? Are other people allowed to edit and upload this map?

Secret Town Portal has no description.
The techtree is just the usual orc one and heroes have some spells changed and added. The custom stuff is kind of lacking. The enemy has more custom stuff than the players.
The terrain isn't that nice either, mostly flat and one tiled.
Spells don't have proper icon positions. Stampede takes the first place instead of Shockwave if you don't learn Shockwave before it.
Spell descriptions lose most of their text after level 3 and they only mention the damage or value.
Two units named Tauren in the Beastiary with the same icon. Any of them you click on leads to training Tauren 2. And this unit is a straight copy of the original Tauren in the Tauren Totem.

While this might be fun, in terms of gameplay or creativity, it's not innovative. The general idea is nice though.

LEAKS
Triggers - Memory Leaks and Custom Scripts
If you're not satisfied with the review and wish another opinion, contact the other reviewers or use the staff contact:
Shar Dundred
Paillan
Alexen
eubz
https://www.hiveworkshop.com/forums/staff-contact.692/
You must log in or register to reply here.

So what happens to imported models if you play Reforged?