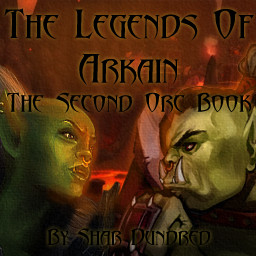 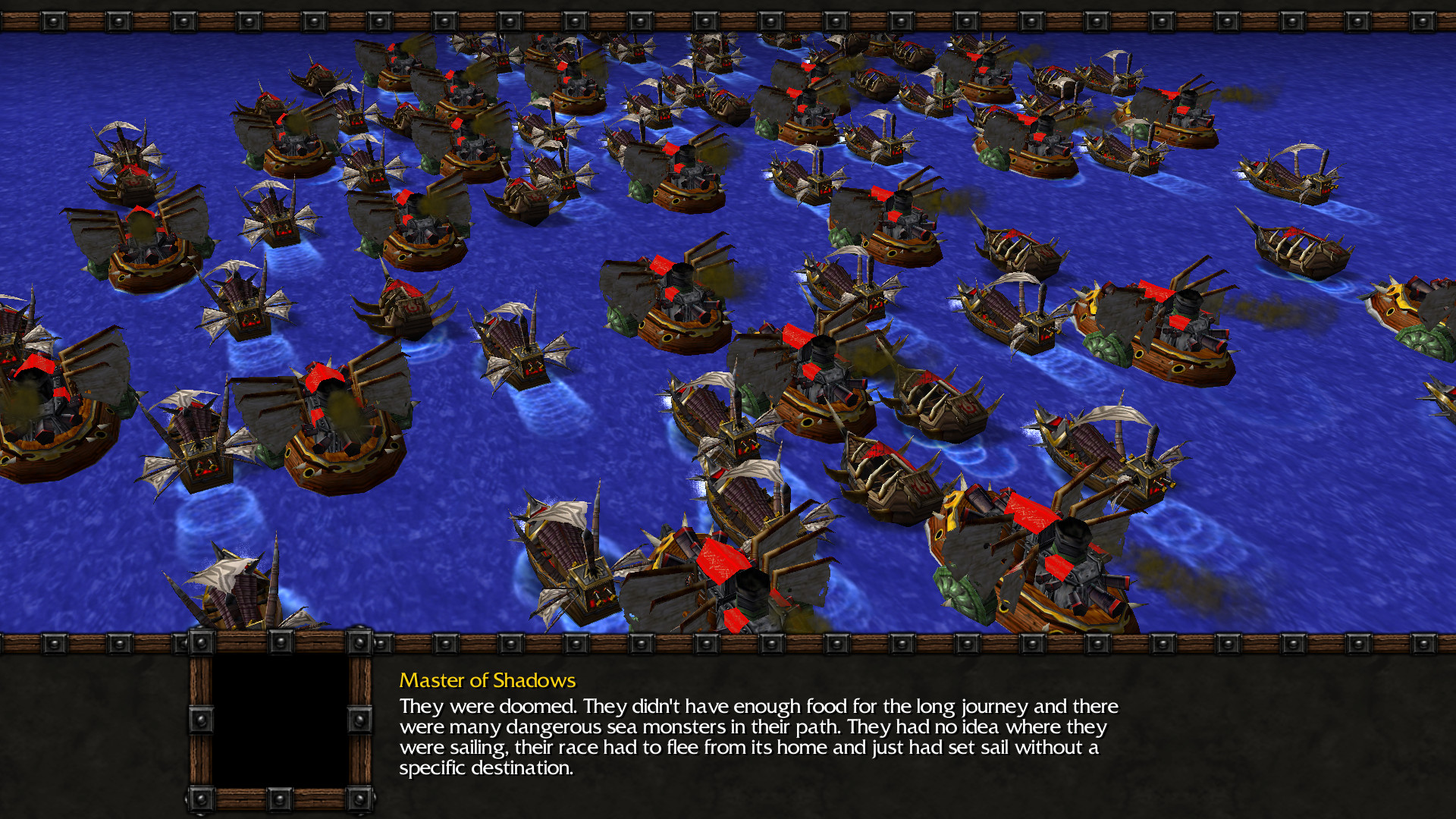 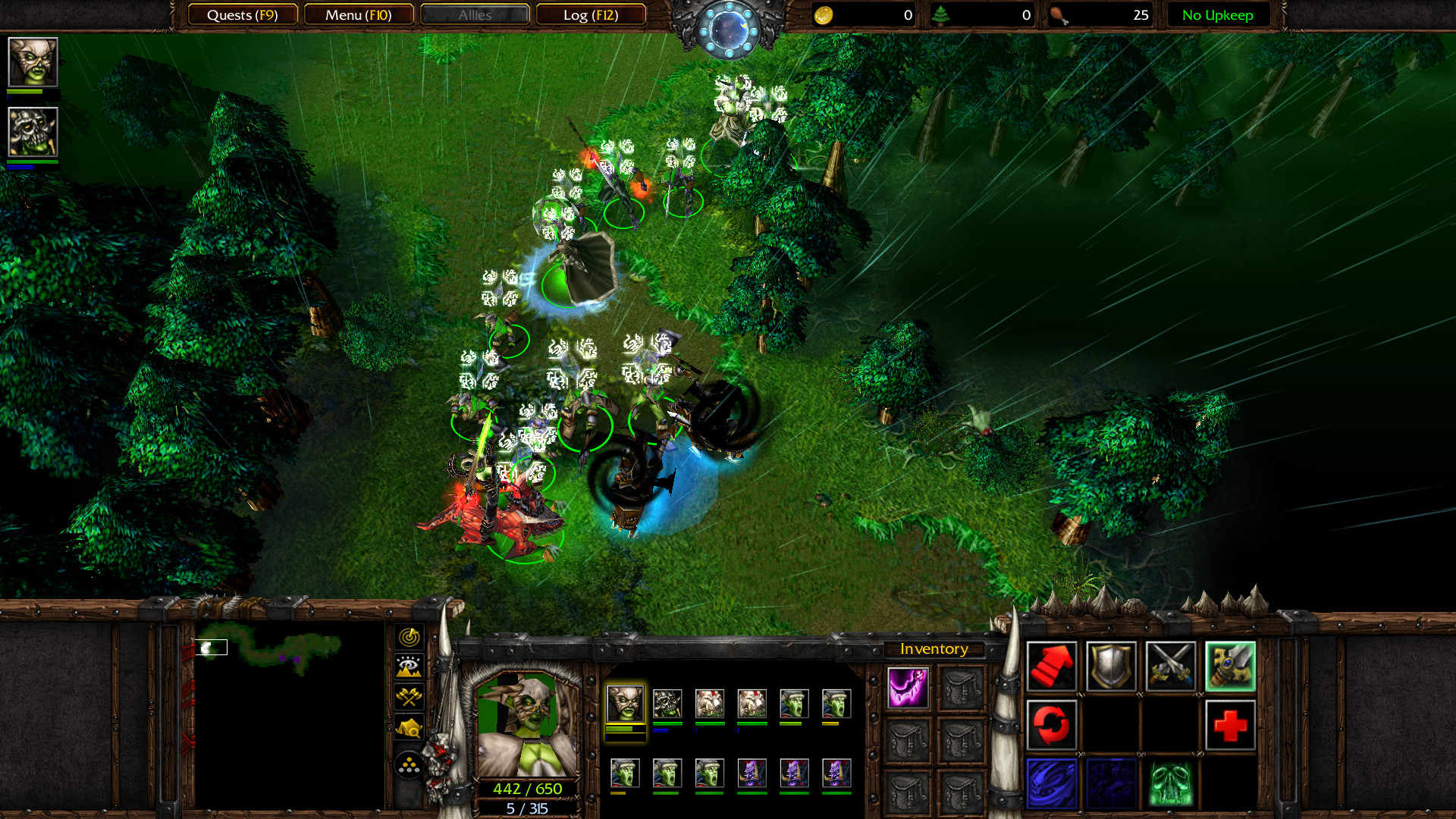 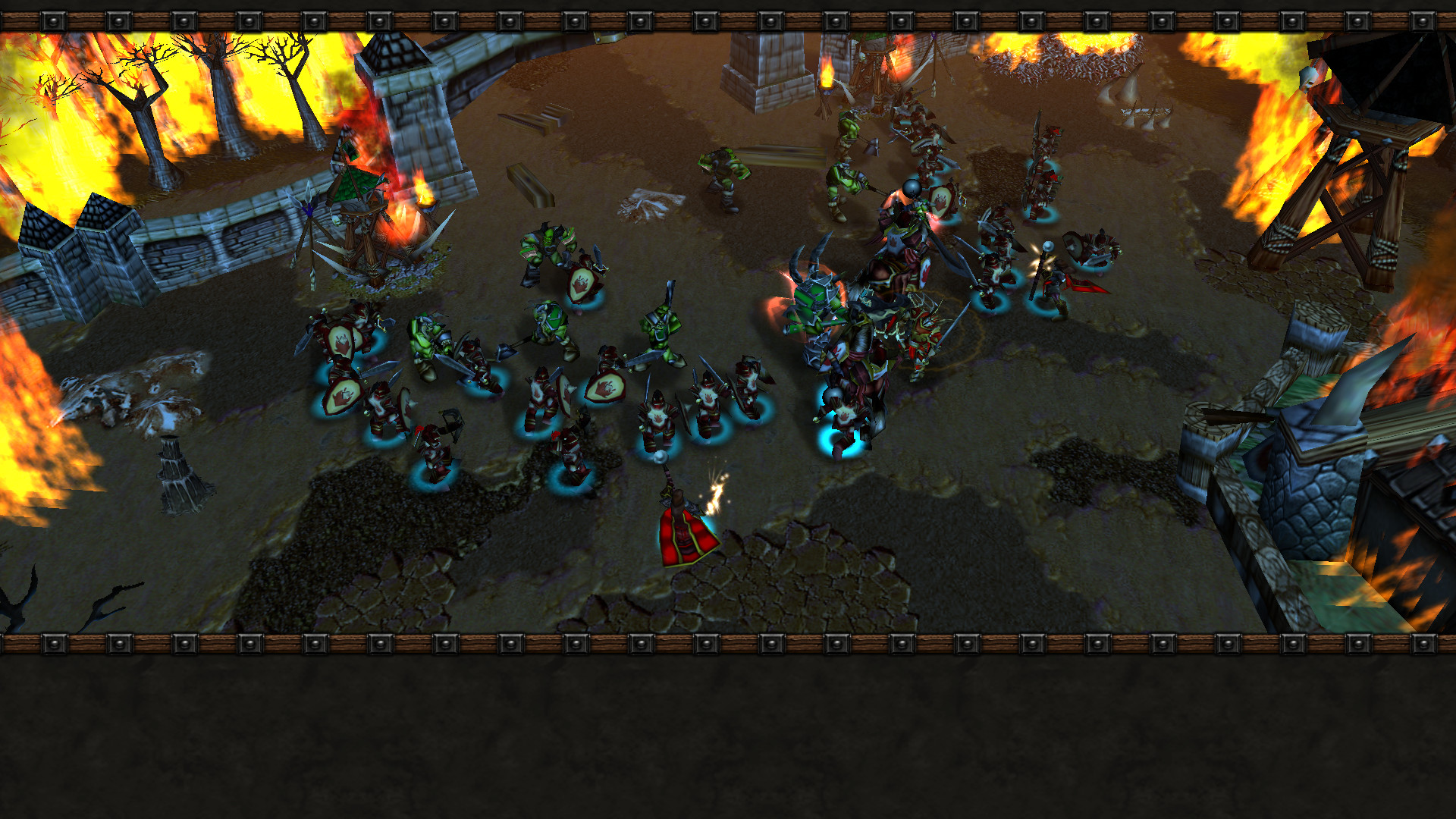 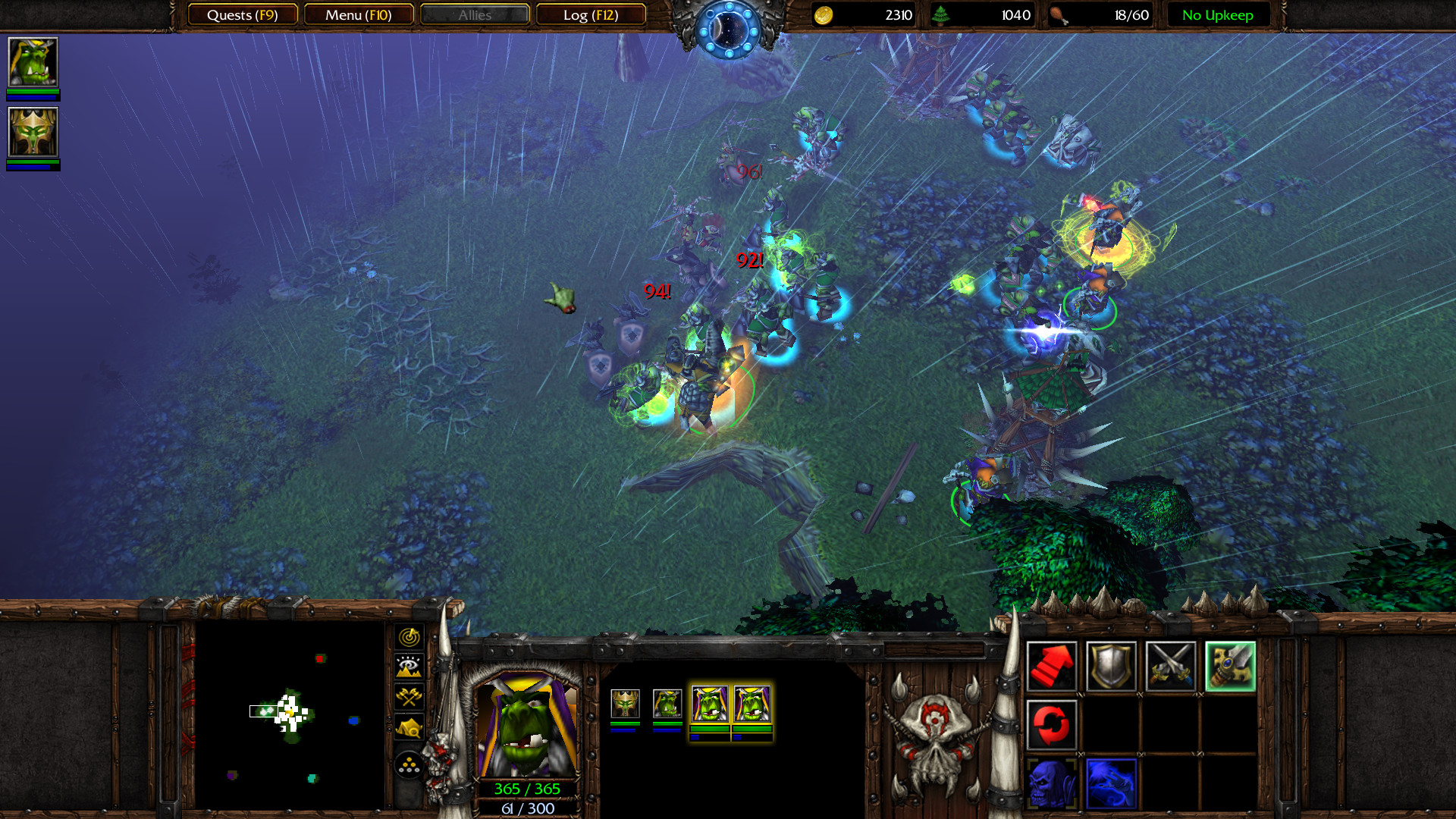 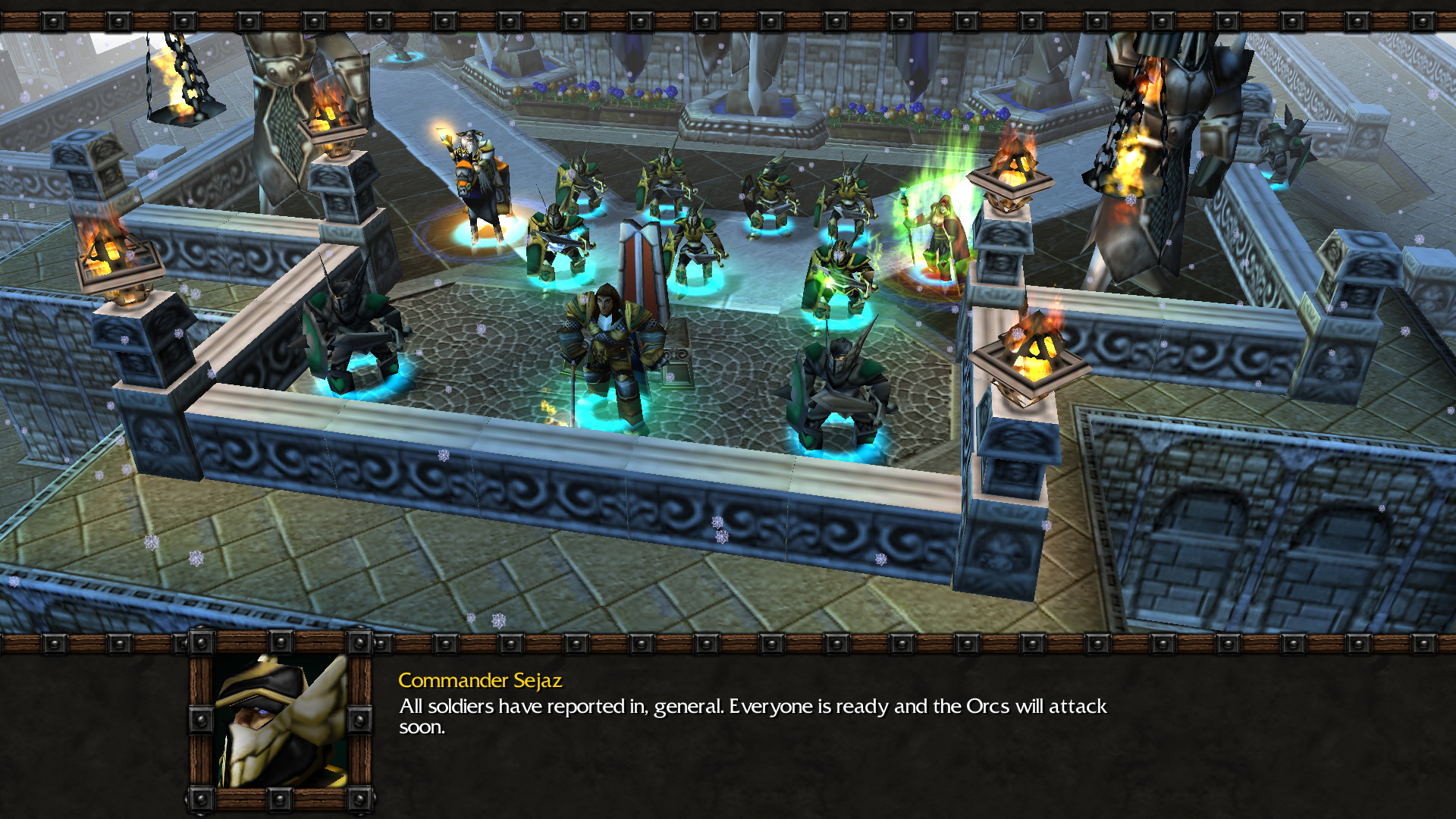 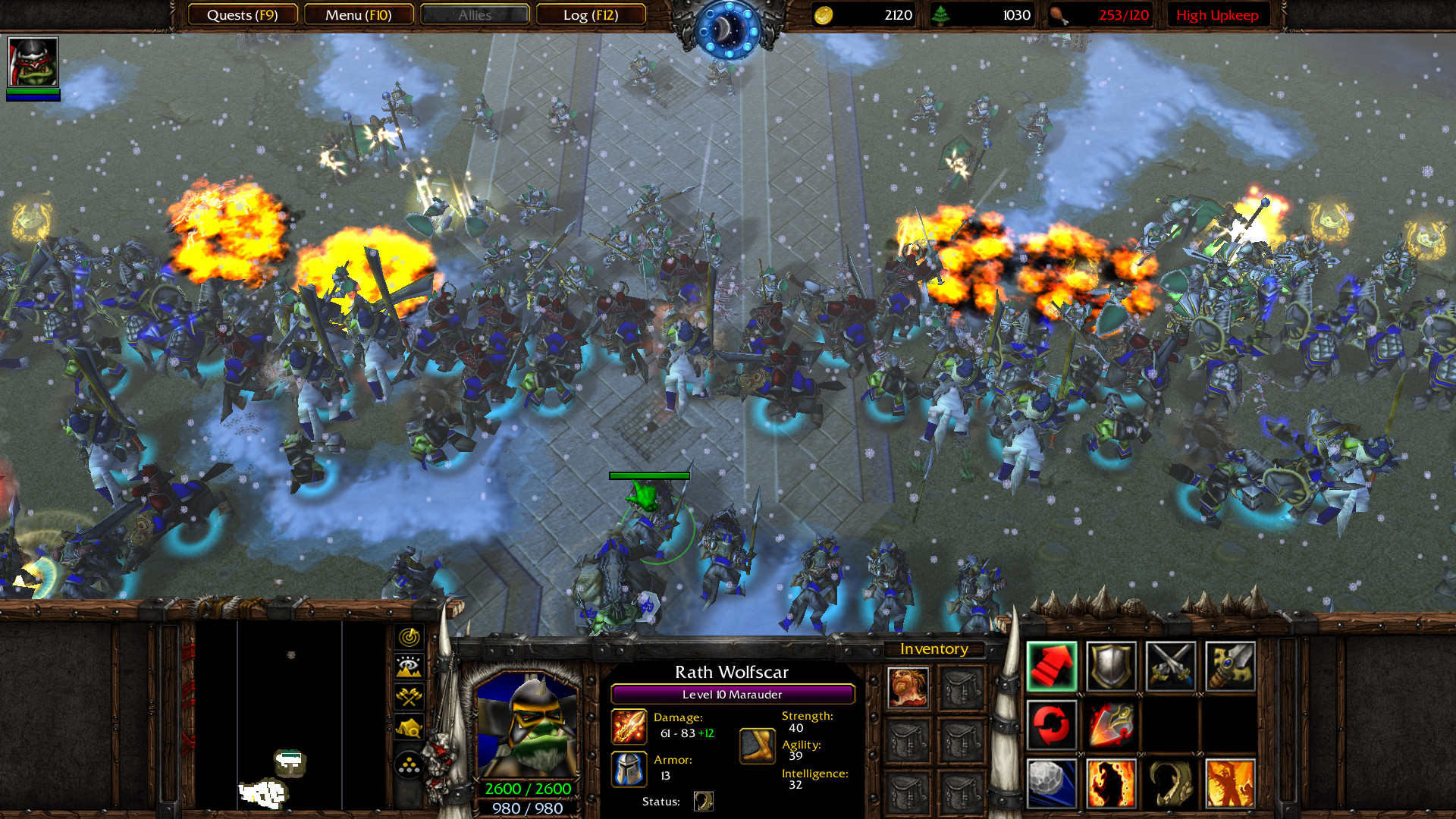 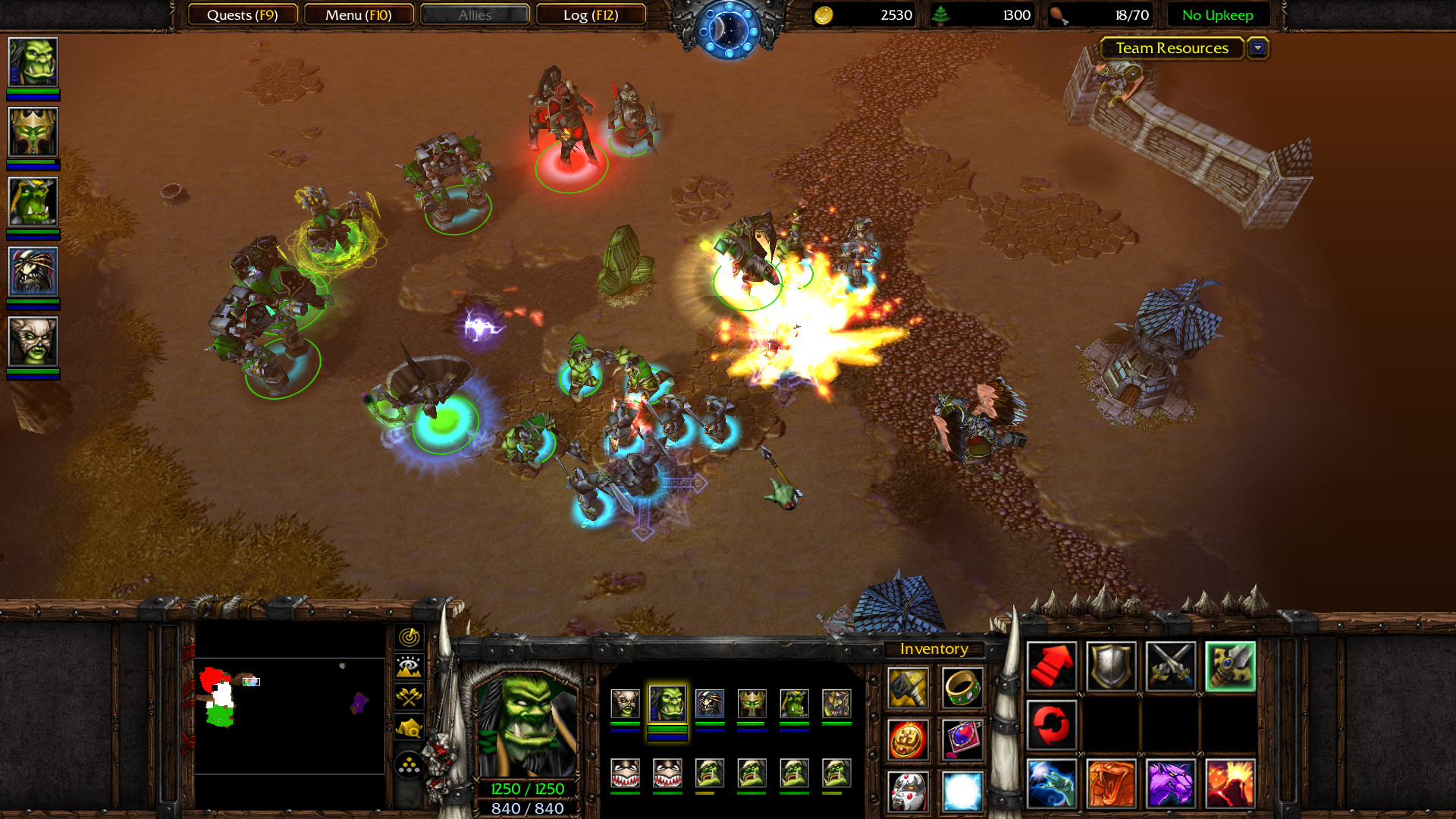 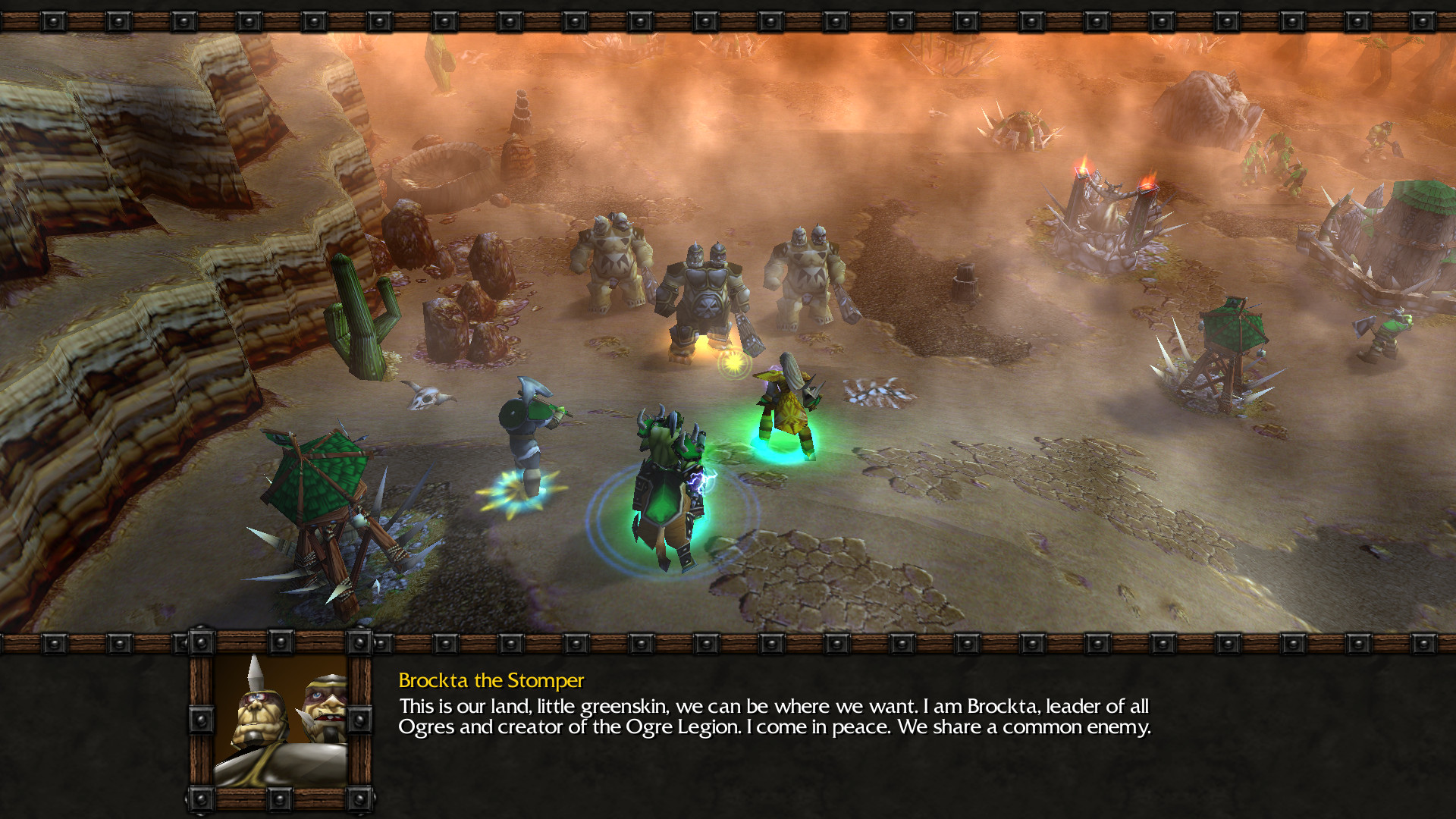 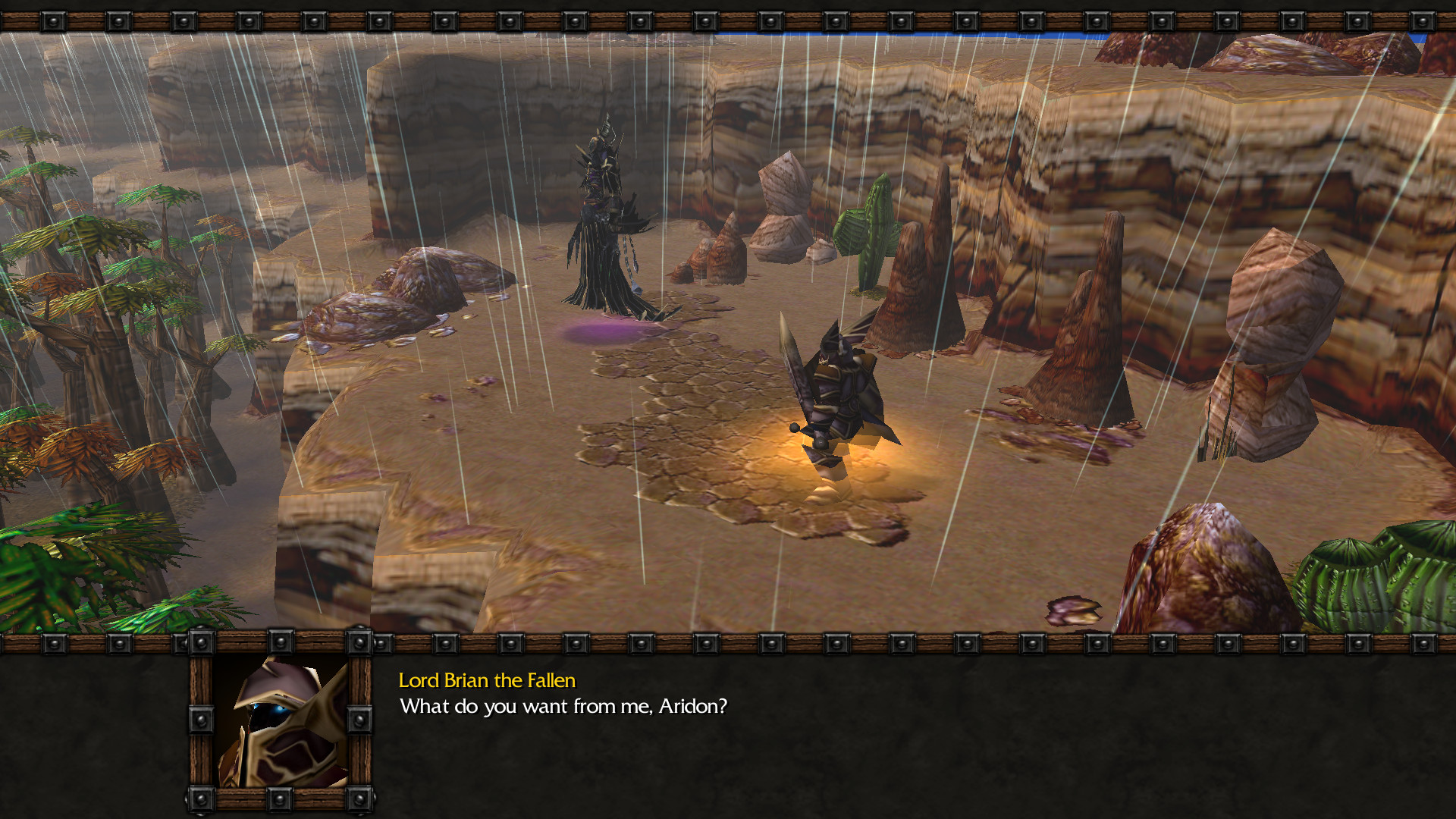 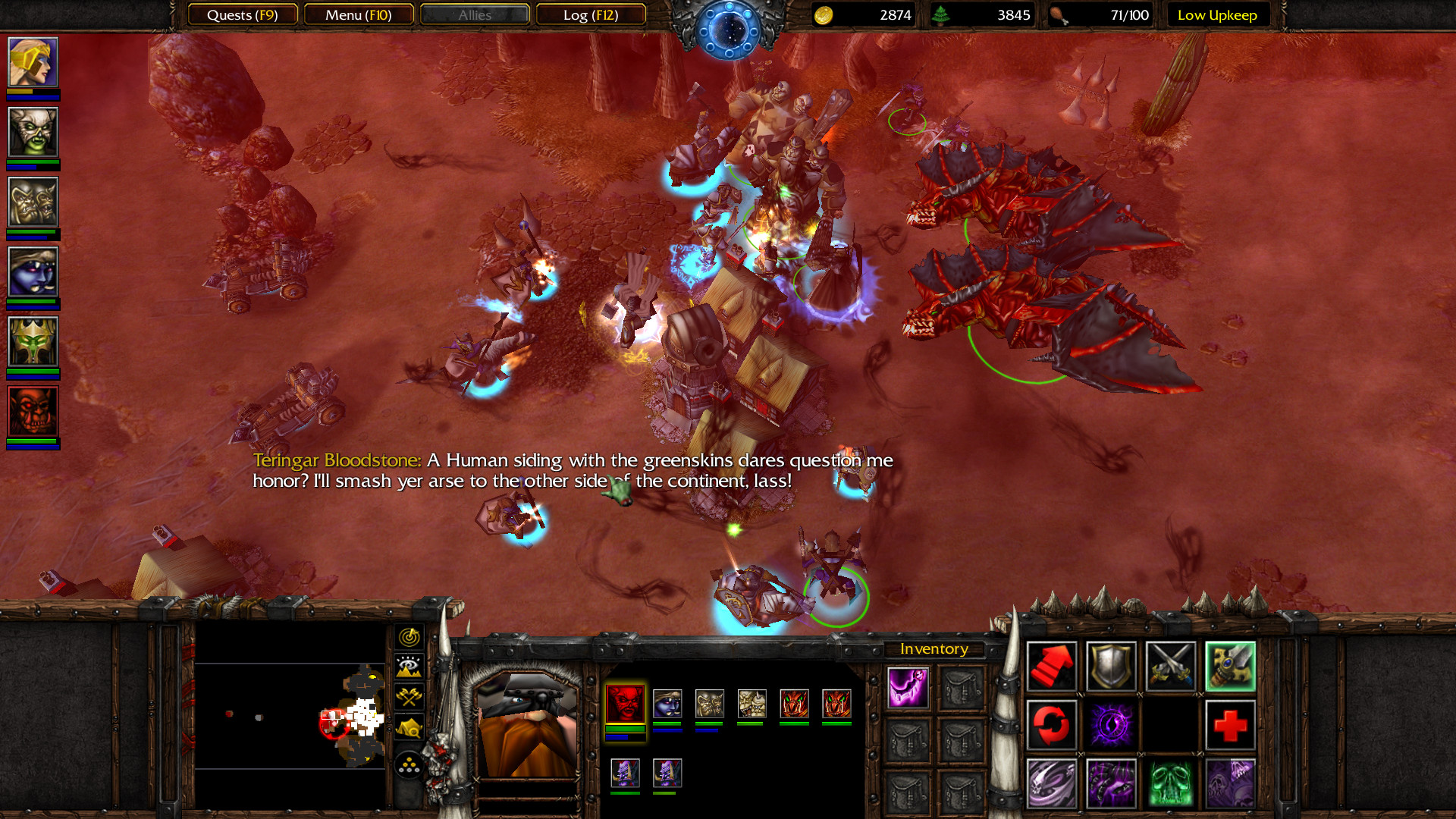 Epilogue:
- Fixed a special effect not appearing at the end of the cinematic
Version 1.11
General:
- Renamed Orc Frigates to Destroyers
- Fixed the message for completing one part of a quest with multiple quest requirements in all chapters
- Reduced the movement speeds of Warmechs in air form
- Duke Redfist is now wearing the Scepter of Healing
Version 1.12
Chapter Four:
- Fixed the hotkey of Rock Golems

Chapter Thirteen:
- Grofzag now starts the chapter with the Hammer of Kome and keeps it for the following chapters
Version 1.20 - The Rise of the Shadow
General:
- War Mills now use the BETA model & icon of the Orc Lumbermill
- Rock Golems now require a Spirit Lodge instead of War Mill

Chapter Six:
- Replaced the building models used by the Darkmind Clan buildings to fit both the weather and their "renegade" status
- Added slightly more snow terrain

Chapter Thirteen:
- New model for Orie Redfist
- Replaced the building models used by the Dominion to better showcase their new organisation
- Changed the names of some edited buildings
- Cannon Towers are no longer available
- Orc Watch Towers have been upgraded:
* Higher gold cost
* Weaker version of the Cannon Tower attack against ground units in addition to the attack against air units
- Pig Farms have been replaced by Burrows for Clockworkers
- Spirit Lounge is no longer available but also not needed as all caster upgrades are already researched

Chapter Fourteen:
- Replaced the building models used by the Dominion to better showcase their new organisation
- Changed the names of some edited buildings
- Cannon Towers are no longer available
- Orc Watch Towers have been upgraded:
* Higher gold cost
* Weaker version of the Cannon Tower attack against ground units in addition to the attack against air units
- Pig Farms have been replaced by Burrows for Clockworkers
- Spirit Lounge is no longer available but also not needed as all caster upgrades are already researched

Chapter Fifteen:
- Replaced the building models used by the Dominion to better showcase their new organisation
- Changed the names of some edited buildings
- Cannon Towers are no longer available
- Orc Watch Towers have been upgraded:
* Higher gold cost
* Weaker version of the Cannon Tower attack against ground units in addition to the attack against air units
- Pig Farms have been replaced by Burrows for Clockworkers
- Spirit Lounge is no longer available but also not needed as all caster upgrades are already researched

Epilogue:
- Slight dialogue adjustments (including a scene at the end where Aridon uses the REAL name of the Master of Shadows)
Version 1.21
General:
- Reduced repair cost of Goblin Merchants
- Pechan now has a unique item, allowing him to place Goblin Landmines (endless charges but with cooldown)
- All versions of Finger of Death and Finger of Pain can no longer target units and buildings allied to the caster

Chapter Twelve:
- Pechan now has some land mines to protect his base

Secret Chapter:
- The enemy bases now make use of several land mines to bolster their defenses
- Vanessa's Gem of Health has been replaced with a Gem of True Seeing
- Increased the hit points & mana of Vanessa by 300 each
- Increased the maximum & starting hit points & mana of Zelech & Fox by 300 each
- Replaced the building models used by the Dominion to better showcase their new organisation
- Changed the names of some edited buildings
- Replaced all Cannon Towers with Orc Watch Towers
- Orc Watch Towers have been upgraded
- Several units of the Dominion have been replaced with more powerful units
- Sand Dragons now start with their upgrade researched
- Several dialogue changes
Version 1.22
General:
- Increased the hit points of Axethrowers from 420 to 500
- Added Redfist banners to every chapter featuring the Redfist

Chapter Four:
- Removed the northern (LB) and southern (Purple) entrances to the Grey base
- Changed the ownership of some units to avoud Grey sending out defense forces to attack the player
- The base of the Royal Army on the other side of the river no longer gets attacked by Demons (neither does the player if the Royals are killed)
- Small terrain adjustments to make some choke points less effective for the AI
- Stronger defense for Grey
- Players now share vision with the Demon waves

Chapter Six:
- The last enemy base will no longer replenish any units in the fortress apart from the Elites directly protecting it
- Replaced a few items carried by enemy heroes
- Players now share vision with the spiders
- The Darkmind Clan will now spawn AI controlled reinforcements in regular intervals to support your offensive
- Slightly moved Aedale's buildings at the entrance of the fortress away from it

Chapter Eight:
- Minor changes to some tiles in the starting area
- The Deathbreeze Clan will now spawn AI controlled reinforcements in regular intervals to support your offensive
- Increased the amount of starting units
- Increased food limit by 10
- Fixed the lack of level, abilities and items of the dwarven hero
Version 1.23
General:
- Shieldbearer Changes:
* Decreased the damage dealt by Shieldbearers by 3
* Decreased hit points from 1500 to 1100
* Decreased food cost from 6 to 5
- Increased the food cost of Red Dragons and Sand Dragons from 8 to 10
- All workers now start with Repair activated automatically
- Increased the intervals between the attacks to make it less likely for several attacks to occur at the same time
- Minor model adjustments

Chapter Six:
- Choosing Blen now results in all Towers & Burrows of the Orcs getting destroyed to make tower spam less likely to hurt yourself
- Corrected the name of Captain Gregor
- The Captains Gregor & Elias who have been with Blen since the first mission of the First Human Book now stay if you choose Blen over Rath
- The flames in the ending cinematic now are also properly displayed if Blen is chosen
- Human towers will now shoot their enemies correctly after the cinematic if Blen is chosen (the rest of the bases will remain passive)
- Some (by far not all!) of the defensive forces now belong to the base next to them, meaning that some of the defensive troops will be reinforced by nearby bases
- Replaced some units around Harmos' base with units of the Order of the Flame

Chapter Seven:
- Fixed the message regarding the new units
- Slightly increased the number of units for the Stonelord Dwarves and the Salrian Army
- The Redfist is no longer displayed in the score screen

Chapter Eight:
- Fixed the Knights of Salria not being able to train Paladins
- Adjusted the attack times of the enemy bases to slightly decrease difficulty
- Increased the strength of the attacks coming from the Knights of Salria
- Decreased the time in the ending cinematic until Zairmak uses Finger of Death
- Flammedus' Centaurs are now controlled by an AI
- Doubled the amount of resources gained for completing the optional quest in Chapter Seven
- Cliffhunter Clan starts with Centaur Hooves already researched
- The Deathbreeze Clan (Player) has been replaced with Ravaging Fire Clan to make colors more distinct
- The Ravaging Fire Clan starts with Burning Oil already researched
- The Ravaging Fire Clan starts with Golem Power already researched
- The Cliffhunter Clan no longer has access to any Orc units (apart from female ones)
- The Ravaging Fire Clan no longer has access to any female Orc units or any race allied to the Orcs apart from Golems (and Bearmen if recruited)
- Moved Magic Vault to a new position between the two bases of the player
- Both the Ravaging Fire Clan and the Cliffhunter Clan are back at a maximum of 100 supply instead of 80
- Replaced the Merciless accompanying Thorn with a new unit type
- Increased the hit points of Commander Thorn by 1500
- Cassius now also trains Mercenary units

Chapter Nine:
- Fixed the message regarding the new units
- The Ogre Legion now joins the fight against the Moghtar once the avalanche has been caused by higher powers and will also train more units to join in
- Improved the graphical effect of the avalanche
- Sand Dragons & Sand Drakes in this chapter no longer cost any food

Chapter Thirteen:
- Increased the gold in the inital goldmine
- Added a second goldmine to the player base
- Tweaked AI attacks
- Seperated the bases of the player and his allies by trees to avoid the AI walking through the player to attack the allies
- Increased the lumber per tree from 50 to 300
- The Redfist Elite, a faction of the Bloodstone Dwarves & the Redfist (not the Redfist Vanguard) remain passive until certain conditions are met
- Tweaked the target change for the allied AI

Chapter Six:
- Replaced Brutes with Firestarters
- Added Force Walls to Greymoore's base to avoid the player from rushing to trigger the choice too early (the Force Walls stay until all other Castles inside are destroyed)
- Added a Sentry Ward to the second gold mine
- Added a Fountain of Health on the first level of the castle

Special Thanks
To Blizzard Entertainment for this great game.
To Turnro and RazorclawX whose great campaigns inspired me to revive this old project.
To all who supported this project!
To all who reported bugs and gave/give constructive feedback both during and after the development!
And very many special thanks to Kasrkin, who supported the creation of this project in many, even countless ways!

Daffa
One of the Hosted Projects. In addition, I have personally played the demo versions and they are well-made. Unless a major bug is reported in this particular version, I don't see why holding out approval status for this map given the sheer amount of...
Read full review...
Reputation Statistics
Page 2 of 8
Show Ignored Content
Page 2 of 8