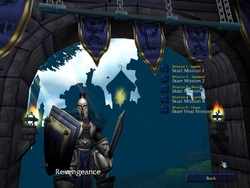 Sky Lord Aeras and his servants invaded our space, conquered our lands and destroyed our forces. Its time for him to taste vengeance.


Campaign features five missions to play at your leisure where you take control of a squad of units and battle your way through the map, finishing objectives, finding allies and items and trying to keep your party alive.


1. Each mission has one or two mandatory objectives. The rest if up to you
2. Each mission becomes more difficult until the final challenge.
3. Enemies are stronger than you, but you become better over time.
4. Its up to you if you want to save or not. Adds to the difficulty if you don't.
5. Overall campaign is at least 5 hours without cheats.


Losing all of your units is game over


TIPS & TRICKS
I want to add some tips for you if you have difficult time beating
some area or map of the campaign.

You can finish any mission with few units and good micro.
All missions have other allies to find and rescue to add to your party.
Keeping your party alive is necessary, even if odds look against you.
Explore and find items to make your allies stronger.

- footman is solid tank that has chance to stun.
- priest is your only healer and is top priority
- mortar team destroys trees, finding secrets and shortcuts. kills towers.
- rifleman can kite & kill most enemies alone
- special units in some missions or using special items


~ all maps contain a variety of items to find.
~ all maps have shadow orb +2 and two shadow fragments. shadow orb +4 is legendary quality.
~ explore the map, use your units abilities to the fullest.
~ apply tactics before brute force. even as a party, some enemies are stronger.
~ gather gold overtime & find the shop. secret info is worth the money

~ units rank up with kills. and gain level up to ability. priest / sky mage doesn't rank
~ some hidden areas are blocked by trees or require items

deepstrasz
Campaign as a tag would suffice. The rest are unimportant and frankly unfitting. [spoiler] The concept might be nice but I don't see it out of Substandard too soon. If you want more reviews, you should participate in the The Grand Review Exchange!...
Read full review...

Blasterixx
I really love the concept already, beeing able to take items on your units and those items having an effect on them is really cool, and the rank system looks cool as well! My review ~~[SPOILER] - It seems like when a unit dies with items in the...
Read full review...
Reputation Statistics
Show Ignored Content