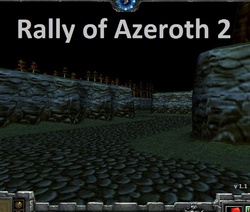 Rally of Azeroth 2
Simple, single-player racing mini-games with 3D "front bumper" camera.
This bundle contains 2 maps:
Drive a car using arrow keys and complete 3 laps. Try doing it in the shortest time.
There are no other racers, no time limit, no collision damages, only a few creeps may stop you from victory. Playing time is about 4 minutes (#1) + 8 minutes (#2).

Features:
Shortfalls:
Racing parameters:
Map details:
Feedback:
Any feedback is appreciated. When I've played this map on my own I could get used to some issues that might be more disturbing to the others. Unfortunately most of the shortfalls I've mentioned are more difficult and unlikely to get fixed.

No credits - only Warcraft resources have been used

deepstrasz
Back to Pending for now. (previous comments: Rally of Azeroth 2) EDIT: Map1: Back to the Road has the same hotkey as Stop: S. The Down Arrow which should serve as reverse stops the car almost instantaneously regardless of the current speed. You...
Read full review...
Reputation Statistics
Show Ignored Content