Ogres in the North 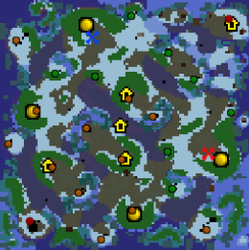 "Don't be silly... there are no ogres that far north."
- Elvish explorer

As the title already gives away, this is meant to be a bit of a fun map.

The three neutral buildings in the center - Goblin Merchant, Goblin Laboratory and Mercenary Camp - randomly switch positions at the beginning of the game.

Additionally, the marketplace is sometimes placed in the bottom left corner and sometimes in the top right corner.

(You do not need to scout to know which building is where.)

The map may look asymmetrical, but all walking distances from neutral buildings to player bases are actually pretty equal.

Right now, it's random whether the three camp spots guarding the neutral buildings drop a lvl 3 charged or permanent, but once the boots are removed from dropping in the next patch, I might set it to a standard.

What I'm worried about most is the large playing area and that I've paid little attention to proper creeping routes. Guess it will either work or not.