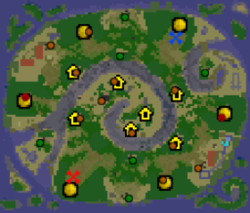 I'm a big fan of the Sunken Ruins tileset, but I hate its palm tress. They're just too exotic looking, and the regular Lordaeron Summer trees give it a much more normal vibe.

The tavern and the lvl 18 orange creep camp in the center swap places randomly at the beginning of the game, so they might end up on either side.

The map may appear very large at first glance, but keep in the mind that the right and left side bare almost completely cut off. The actual playing field is more like 92x96.

A lot of people – too many to name actually – from various clans have helped me test this map and get it to playable level. I'm sure there's still much to improve simply by tweaking creep camps, but it's pretty stable for the moment.

v05
- Removed arc in the map center cause it might obstruct vision.
- Relocated arc in the left half of the map to prevent it from obstructing vision.
- Made the entrance to the map center more equal from both sides.
- Adjusted the terrain in the center to equalize where players can build.
- Removed the hydra camp from the corners.
- Made the island rounder to look nicer. Doesn't affect gameplay.
- Relocated a green creep camp so there won't be too many of those near the stating position.
- Removed one neutral building from the center. Instead added a red creep camp since the ones in the corners have gone.
- Switched the position of Shop and Lab, thus duplicating the Labs from 1 to 2 and and reducing the number of shops from 2 to 1.
- Placed the Merc Camps on the sides of the map, where they are guarded by the yellow creep camps that have been there before.

v08
- buffed creep camp opposite of your base from 2/1/1 to 2/2/1
- moved one green creep camp from behind your base closer towards the center of the map and changed it from murloc to jungle stalker / trolls
- replaced Lordaeron Summer Merc Camp with Sunken Ruins Merc Camp
- pushed the Merc Camps a little further back to make room for a new creep camp
- added some cliffs behind the starting positions to seal off the area
- set secondary gold mine (3 and 9 o'clock) creeps mostly to camp to prevent undesirable attacks
- replaced secondary gold mine creep Enraged Jungle Stalker with Ogre Lord. buffed rest of the camp to keep it lvl 18
- overall added trees and through that made many paths a little more narrow
- changed the terrain in the map center because you could AoW the Goblin Merchant from one side
- equalized the tree lines at the starting positions and expo

v14
- changed item drop of murloc camp near base from lvl 2 charged to lvl 2 permanent
- changed item drop of creep camp at natural expo from lvl 2 permanent to lvl 2 charged
- swapped Merc Camp + creeps with Sea Giant Hunter creep camp
- nerfed creep camp at Merc Camp
- remixed and buffed Sea Giant Hunter creep camp to an Ancient Hyrdra / turtle composition
- remixed red creep camps in the 4 and 10 positions to feature more threatening creeps
- remixed natural creep camp to make it a little tougher to beat (trappers). creep level (11) remains the same
- widened the choke point at the natural expo
- remixed the lvl 5 green turtle camp near the base to crabs because it needed to provide slightly more exp
- also moved that creep camp around a little to allow a straight path from your base to the natural
- remixed the creep camp at the Goblin Shop

v17
- replaced Sea Giant Behemoth in Goblin Shop creep camp with Sasquatch Oracle, also buffed the camp slightly and increased item drop from lvl 3 permanent to lvl 4 permanent
- made the area opposite of the Merc Camps a little wider
- replaced the Hydra camp at the Goblin Lab with a Murloc Mutant and some other murlocs
- remixed green Murloc creep camp near the starting position with turtles and a Stormreaver Hermit. lvl composition and item drop remained identical

v18
- renamed the map from Suramar to Memories of Suramar
- murgul creep camps in the center: replaced one healing murgul with an ensnaring murloc

v19
- renamed map back from Memories of Suramar to just Suramar
- remixed the same murgul creep camp again to buff it / item drop remains same (lvl 3 charged). This integrates the camp in a 3-camps-to-lvl-3-route
- fixed Giant Sea Turtle Camp near base from not being set to camp aggro

v21
- renamed to Memories of Suramar
- beta version for nwc3l

v24
- sealed off the bottom left and top right areas of the map
- added more trees to the starting location, pushing the lvl 9 turtle creep camp a little to the side
- replaced Golin Lab with a Marketplace
- replaced Goblin Shops with Goblin Labs
- added Goblin Shops to the orange murloc creep camps near the expo

WolfFarkas
Got it, got something to spot. [ATTACH] Set the mana of the hydra to full. this is a IMO, you have the loot of charged L3 in creep L17 in the merc camp and charged L3 in the L14 goblin lab. if one player gets boths, mmm to much I would put a...
Read full review...

deepstrasz
Nearest neutral hostile camp a bit in the base. Rush is quite viable since Militia can even attack a few times. Do hydras have bigger camp range? Also, the ones in the northeast haven't got full mana. Approved. If you want more reviews, you should...
Read full review...
Reputation Statistics
Show Ignored Content