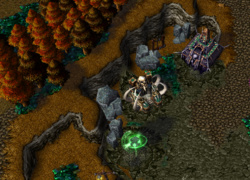 
A new spin on Vampirism, a band of peasants must create hidden bases on a flat farmland. There are no good bases to wall off, so luckily the Death (Vampires) start the game very weak. The Death players must kill creeps and critters scattered around the map to gain experience to reach level 6. Once they do, they can Evolve into an all-powerful Demi-god, and choose from one of 6 unique custom heroes.

By the time the Death heroes arrive, the humans should have harvested enough trees and critters (harvesting critters gives gold) in order to build a small defense perimeter with towers and archers. Some may be able to hold off Death but others will fall. As the humans grow stronger, so too does Death.

A strange cloud looms over Westfall. The farmers have heard rumors that a horrible demon camp lie somewhere near the Howling Mines, and it has rumored that some of the neighboring peasants have gone mad. Distrust spreads through Westfall, evil is here.
Contents
Reviews