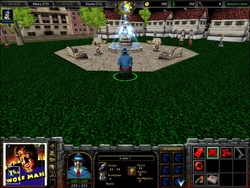 Singleplayer third-person camera classic horror map.
The goal of the map is simply to find and kill the werewolf (in his human form during the day, or in his wolf form during the night) without being killed and trying to save the village's citizens (if too many of them are dead, you've lost even if you're still alive).
To kill the werewolf more easily you have to explore the map to find somewhere some silver bullets.

deepstrasz
You should write some information in the quest log about the chat system. It took me a minute to figure out I had to use the arrows for choosing a question (right arrow I mean). It would be nice to be able to ask all questions one after the other...
Read full review...
Reputation Statistics
Show Ignored Content