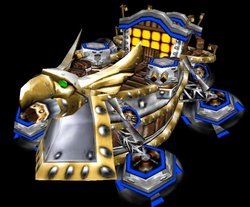 "I think you've been drinking too much if you say you've seen a flying ship."

Note - The propellers stutter in the model viewer, this is not the case in-game.