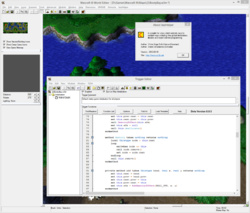 The JassNewGen pack 1.5g
This is the official Jass NewGen Pack, updated to version 1.5f.

The final result is a World Editor that compiles vJass code, uses PJass to check for errors, highlights jass code, has a proper testing environment, supports visual preview of colored tooltips and can use grim extension pack as well. Not to mention that JassHelper also saves backups of whatever you save so it is also safer.

​
The collection includes the following

TESH has been restored back to SFilips version due to reported issues.
Added missing pjass.exe​
1.5e

JassHelper has been restored back to Vexorians version due to reported issues.
​
1.5d


Installation
Due to overzealous Google bots and the way the wehack works, it keeps marking JNGP as malware. We have repackaged it as a password protected zip in hopes that it will work around the issue.
THE PASSWORD IS: JNGP

Common Issues
Windows blocking files/Unresponsive after starting
Try right-clicking the zip file after it has downloaded, select properties, and hit the checkbox in the bottom to unblock the file. Now extract the files again and see if it works.
Contents
Reviews

Ralle
This tool is obsolete. Everyone should use WEX instead.
Read full review...
Reputation Statistics
Page 1 of 6
Show Ignored Content
Page 1 of 6