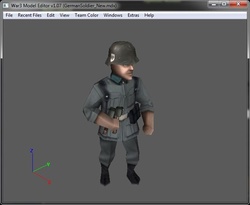 The long-awaited german soldier model from WW2: World in flames is now released.

Moderator
20:53, 13th Dec 2010 anarchianbedlam: An absolutely beautiful model. Useful and a very low filesize for the quality of work. 138 for a model and texture? nice. The animations are butter smooth. Great work on this one. Approvazzled. (and I assume...
Read full review...
Reputation Statistics
Page 1 of 3
Show Ignored Content
Page 1 of 3