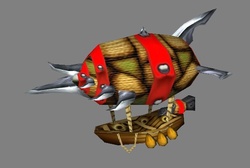 I've just found an old model on my pc, the SoC/Wc2 Zeppelin.

I made it with help from Mr.Goblin, who provided me an concept to work with. After I finished the model, it was decided they would never use it anyway in SoC, and Linaze told me to release it if I like

Balloon and ship are taken from ingame existing meshes, ropes, blades and motor are made from scratch. The fire particle from the walk animations, is a modified version from Chaos Space Orc attack fire.
And check the model ingame, the screenshot doesn't look that good, I'll make a new one later, too busy at the moment. (Modelling/Texturing Competition model etc.

Have fun with the model, and if you give credits (wich I don't really care) give it to me AND Mr.Goblin, who guided me through the making of the model.

Oh and edit it as much as you like, just tell me before