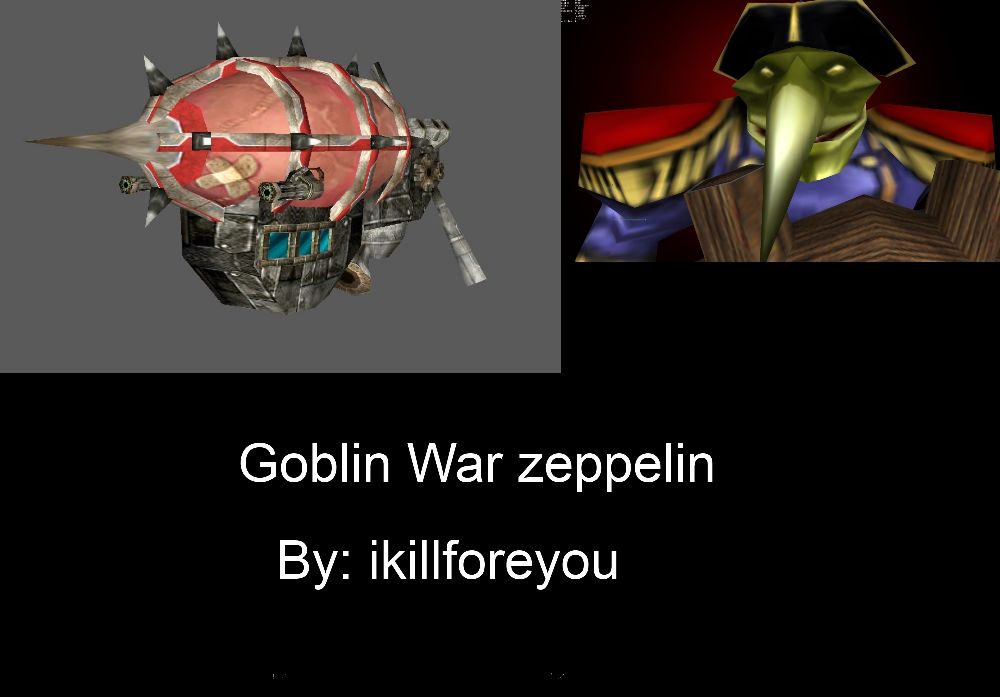 This bundle is marked as approved. It works and satisfies the submission rules.
View usage Statistics
Reactions: hanz3, Afterburner, Master_Elite and 17 others
A goblin war zepplin, it has dual chain guns and a high calibre cannon used for bombarding ground units.

Known to blow up spectacularily if shot with incindiary rounds.

Made in 3 days, as a request by Windu.

It's actual filesize for the map is 36 kb but for some reason it's like 80+ filesize out of game.

i hope you like it, as there's a lack of true goblin technology, especially air units.

Edit1: forgot to add a camera, done now.
Edit2: Made "stand - 2" and "stand - 1" less static, i also fixed "attack - 1" as it's Z translation was off.
Edit3: Made all attack anitions less static.
Edit4: OOPS! used revilgaz's picture, lol!
Edit5: Fixed extents, it should be selectable now.
Edit6: Due to some comments on the actual blimp part, it's now darker, so it looks much better. Fixed "Zepplin" to "Zeppelin"
Edit7: For some reason it made the interpolation type for the geoset animations "linear" so i set it back to none.
Edit8: Added portrait that had been rotting on my harddrive, fun.

Reviews
23:27, 3rd Apr 2010 DonDustin: wonderful mesh with creative texture choices. The animations seem fine aswell. As I see a lot of work in it and because it seems really useful to me for many types of maps I rated it with a 5/5
Read full review...

Models 24 Skins 3
That is awesome. Goblin engineering at its finest!

machinegun is out of place

This is amazing! damn!

Maps 4 Tutorials 1
The First Vehicle model with a pilot as a portrait in it. good job!

Orcnet said:
The First Vehicle model with a pilot as a portrait in it. good job!
Click to expand...

Icons 1
haha i like the band aid on the front..

Spells 3
Many thanx to you for this, dude.

WTF
Thats Awesome!!
Is Perfect not only for goblins, but i think too must very usefull for WWII maps, as the soviets have air forces just like these war zappelins... if it has a droping animation would have 5/5 from me. now is 4/5
JUST AWESOME, KEEP THIS JOB

Wow, such a high quality model....especially for the low filesize! Just awesome! I am definitely putting this in my map. Thanks a lot!!
+rep

its good thumbs up !

Models 4 Icons 22 Packs 1 Maps 3 Spells 3
Hey, just out of curiosity, what textures does this use. Also, do you think you could create actual Goblins?

Probably not, i'm pretty much done warcraft 3 modelling in favor of starcraft 2.

I'm making some goblins as request though, not the actual humanoids.
You must log in or register to reply here.