damn it not work

wtf with that second tab

Idaero Ace made this thread June 28, 2014. That's when he was 16 years old, still studied on 11 grade. Actually, Idaero Ace already draw since 2009. That time he mostly drawn Spiderman, Halo (game), and Star Wars. On 2010, he drawn a lot of Assassin from Assassin's Creed game. On 2011, he mixed most what he knows, mostly a mix between Halo and Assassin's Creed. On those time, Idaero Ace still draw only for fun, and didn't take it too serious.

On 2012, he was on 10th grade. He didn't draw much. He started to like Adventure Time, and draw something like that. On 2013, he started to learn to draw properly. Why? Because there was a friend (the name is Praja) who draw a really cute anime girl. Comparing to his, Idaero's drawing was really bad. That made him decided to draw properly. On 2014, his drawing got better, but still not as good as Praja's. One day, on a night, Idaero had a thought to challenge him drawing (and also ask him to teach Idaero). I decided to called him on next morning, but on next morning, another friendly called and told Idaero that Praja was murdered.

On 2015, he started to doing drawing more serious. He hunted a lot of art tutorials on internet. On mid 2015, he went to college, took Architecture major. This made Idaero can't draw what he wanted much, because really busy with the assignment. On 2016, he was on second semester, but his family can't pay for his college, so he stopped. So then, he draw a lot on his home till now.

Actually, Idaero Ace is really lazy to upload his stuff. He has Instagram, DeviantArt, Facebook groups, and others, but super lazy to upload his drawings. He said, he is lazy to open his laptop only to upload his stuff. So, why here? At first, on 2014, he made this just for fun, because that time he thought that his drawing were awesome. Then he stopped update this thread for a year, till a couple months ago (mid 2016). This thread was closed because inactivity. Then, Idaero tried to use the new HIVE 2, and surprised because it's super mobile friendly. So he decided to awaken this thread and uploads daily.

And at this time (July 2016), he thought this art section seems quite more active. He really hopes he got a lot of likes, comments, critique, and reputation.

Idaero Ace took really long journey. He started to learn properly from 2013. That time he focused on anime style, then changed to realist, and then Disney, then realist again, and then anime again, and then mixed and try to made his own. He only learnt from Internet, mostly Youtube. He only can draw with pencils. Idaero had tried to use pen but it's really suck, and tried playing around with colored pencil, and turned ugly also took really long time. Idaero Ace really wanted to make digital art, but he don't have tablet. He tried to draw with mouse and it's almost impossible for him.

Icons 3 Maps 1 Spells 22 Ported Icons 5 Tutorials 11
the non colored ones are very nice, the colored ones.. not so much.

Maps 1
pls scale them down. a smaller version of your drawings are enough to show yur noob skills

Maps 4 Tutorials 1
joke/You drawn me/joke
You make cool sketches but in the first one the abuse of special effects make it look weird.

I have the same opinion as Chaosy. The drawings are very good but the coloring isn't.

Icons 4
I can see a great improvement between the first and the last picture!
Keep this up!

Thanks all for the feedback.
It's the first time I tried digital draw, so the colored one are creepy

I will try to take some shoot my previous draw, around 2 years ago I guess
And I will resize them this time.

phew, finally, after one hour upload the images....
just check my album for now, if you want.
i will add my finished draw here, with some comment i guess

Maps 2 Tutorials 1
You have some talent, but the colored ones aren't that great but could be an interesting draw style for an anime (I would enjoy watching a weird-drawing-style anime).

Spells 1
I see you're an aspiring anime artist.
Your first drawings are really bad(No offense) but I really like the colors. Then I look at your more recent drawings and I can see a huge improvement. Your latest drawings look really good.

Hope you get better and better.

Idaero Ace said:
Actually I combine many thing, that because my draw history...
Firstly I draw some kid draw, when I'm still on elementary till 1st junior high school
then start draw Halo, on 2nd junior high, i stopped drawing, on 3rd, i draw cartoon style
Start drawing again on 1st senior high, when my friend draw anime style, i start learning that. Take one and half year
recently, i trying to draw disney and realistic, and also coloring. I never coloring before. I never coloring till a couple months ago
Click to expand...

I actually started to draw 6 years ago when I befriended a guy who was really good at drawing anime, begged him to teach me how to draw. He did tough but for a short time only. He even made me a notebook on how to draw anime characters. Then I stopped drawing for a few years and here I am. Back into drawing.

Spells 1
Do you draw this on your computer or a graphics tablet or do you scan a traditional drawing?

Nice drawings there dude. There's a bit of a proportion problem (the line on the back to the butt) on the half body drawing. Anyway, keep drawing

I always draw with pencil on my sketchbook
Click to expand...

Models 197 Icons 24 Maps 7 Spells 7 Reforged HD Icons 1 User Interface 1 Tutorials 3
Just a tip; you should also showcase the images in your main post. Albums are much harder to browse.

I meant this bro, I'm not an artist though so don't take this seriously lol: 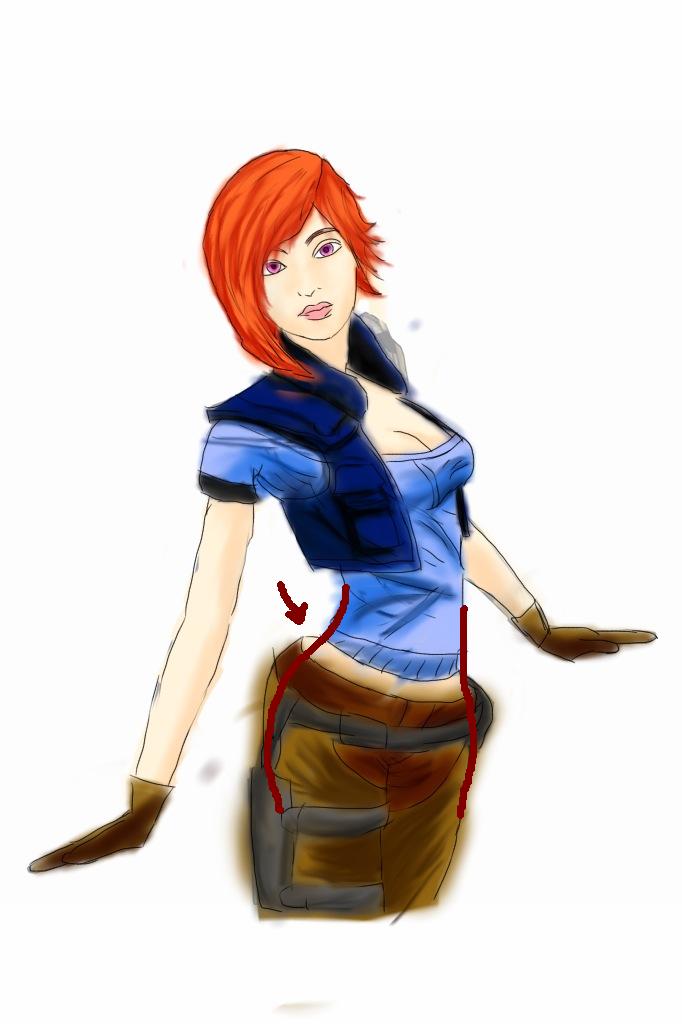 Maps 3 Spells 3 Tutorials 1
You got the talent bro

That's good. The face needs a bit of fixing though.

Models 197 Icons 24 Maps 7 Spells 7 Reforged HD Icons 1 User Interface 1 Tutorials 3
You could tweak the face a bit; the lip area and the eye shape (if okay).

CakeMaster said:
You could tweak the face a bit; the lip area and the eye shape (if okay).
Click to expand...

Haven't I said that earlier? ;P

@Idaero, yes the face symmetry is a bit off as of now. Have fun though

Spells 1
You're really getting better and better here.

Models 197 Icons 24 Maps 7 Spells 7 Reforged HD Icons 1 User Interface 1 Tutorials 3
She looks too thin. Other than that, the color scheme is cool.

this section (concept art) is dying
btw, here is some of my new draws 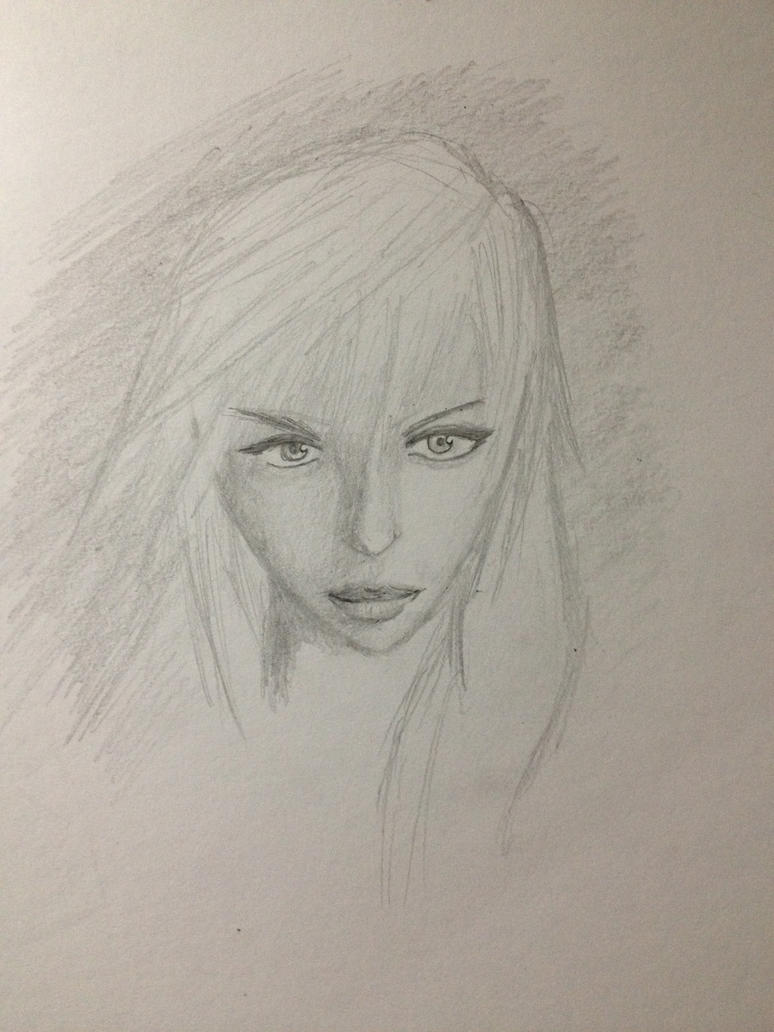 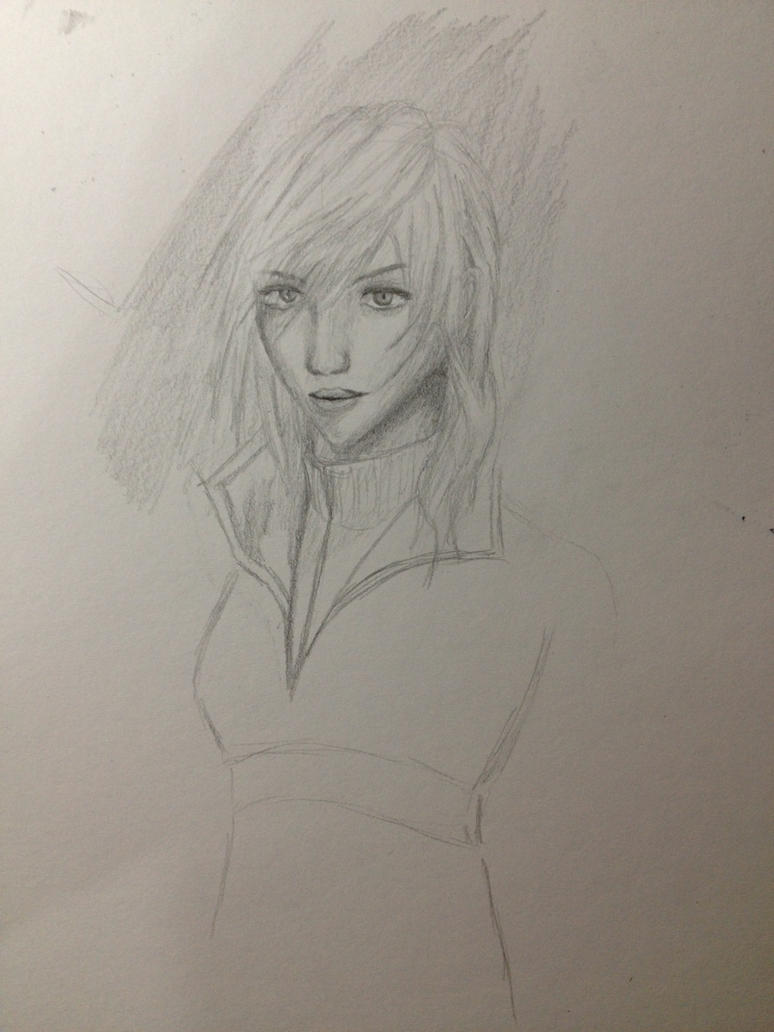 this section (concept art) is dying
Click to expand...

You think? You should see the Sound/Music Art and Graphic Design sections :/
This is rather active compared to those.

Models 3 Icons 65 Packs 3 Skins 27 Templates 3
It can be even better, you need to look up to your shades and highlights more imo.

Models 18 Icons 8 Skins 1 Maps 2 Spells 4
That annoying moment when someone call them ''noob draws'' and you cant do 10% of it . DIEEEEEE

Warning
Big sized picture. Open in new tab and zoom out if you want.

LOL, these draws are a years old before I learned draw from Mark Crilley.
For the first one, he is Dante. Look at the face, ugly face 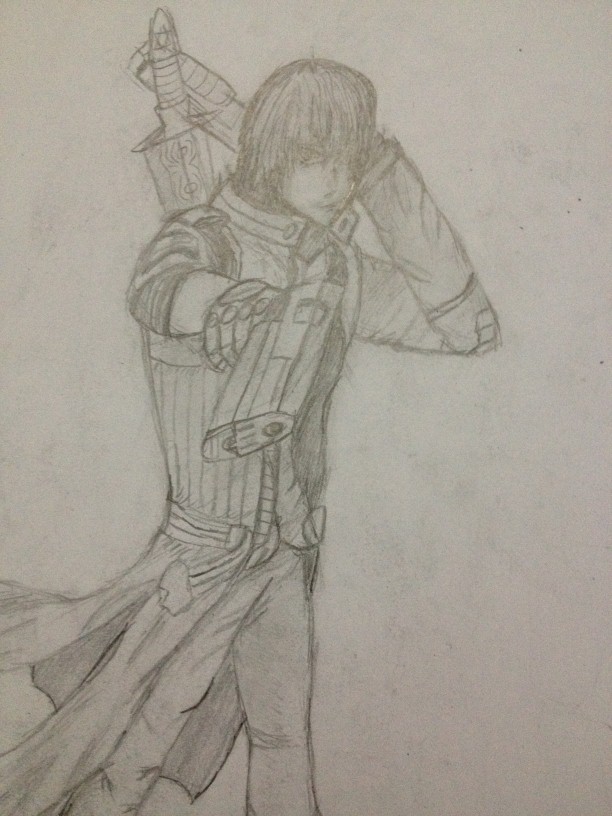 And the second, Assassins Creed.
The proportion are ugly 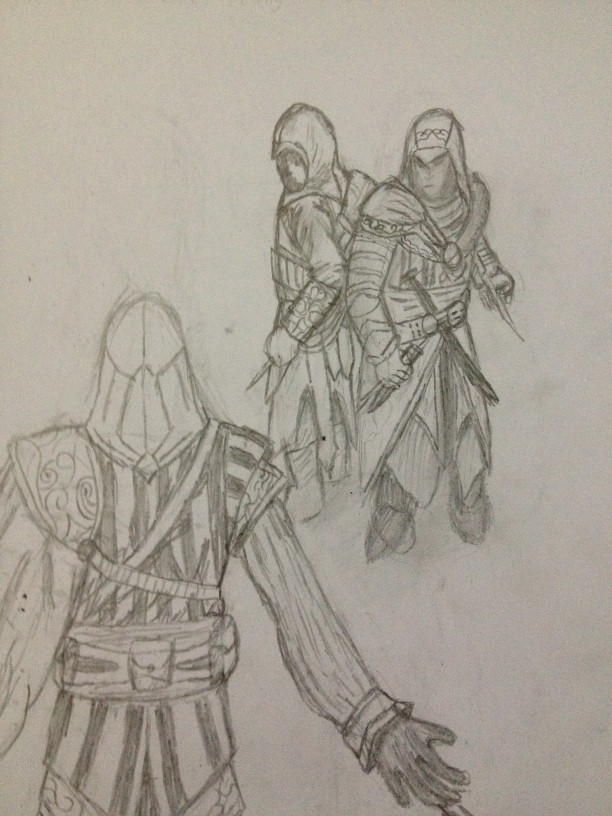 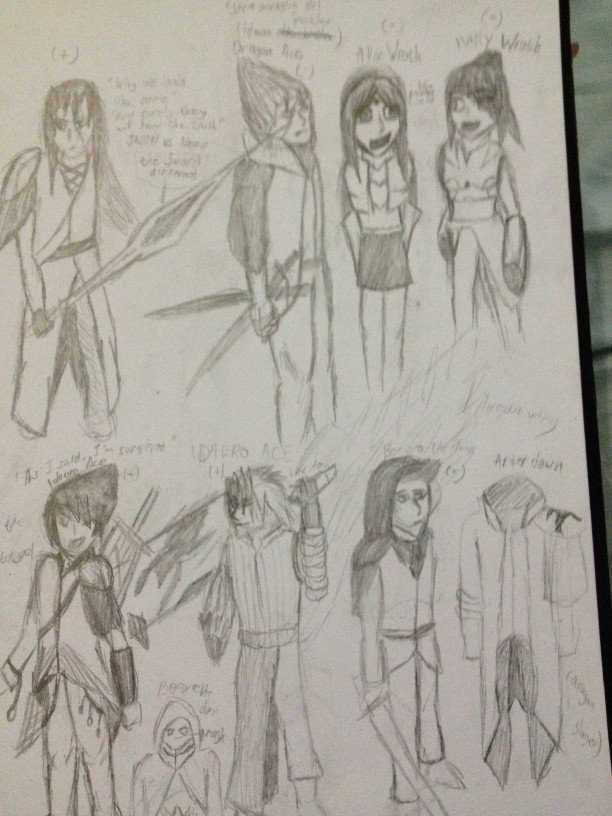 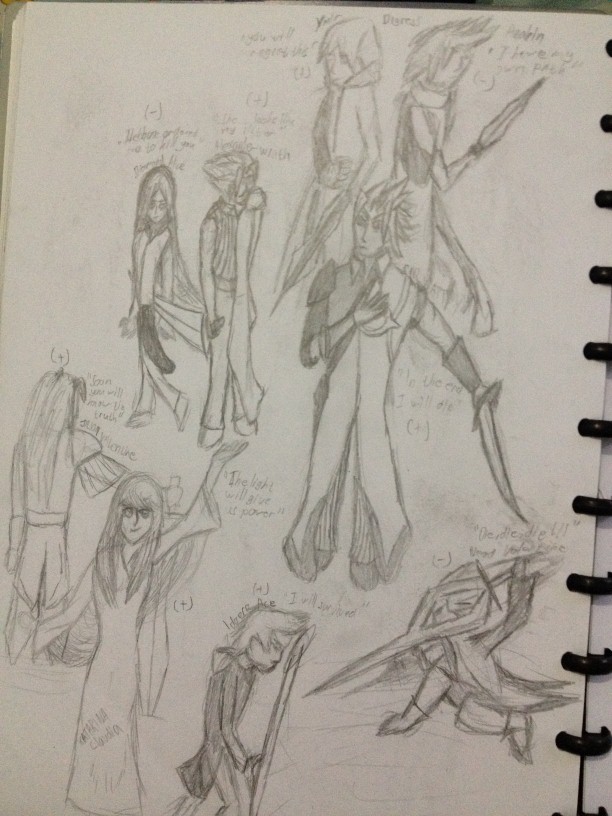 After I play Assassins Creed Re-Armed with my friend, I draw this 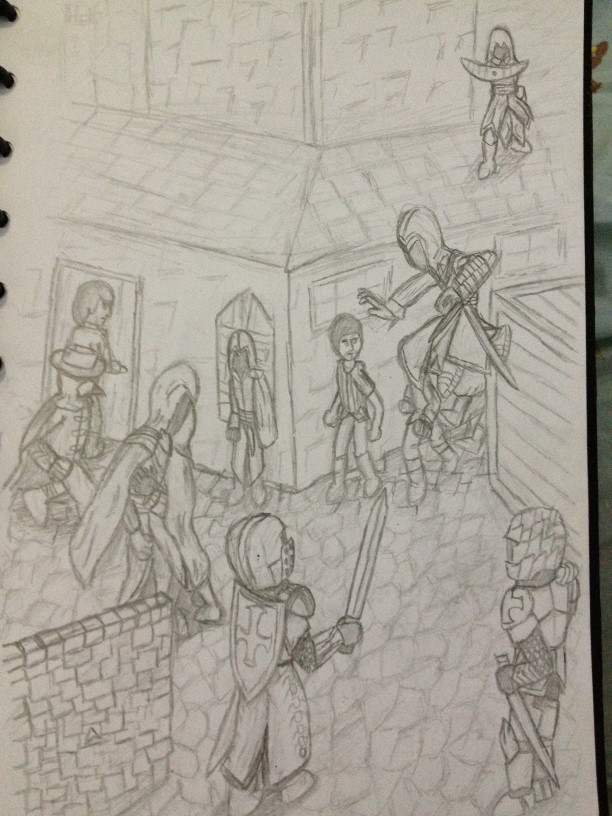 LOL, I posted this in wrong place, on Something Else;Describe User above you.
hahahaha