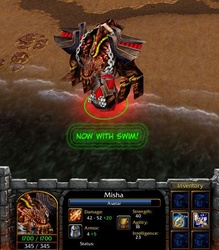 Edit: so apparently war3 is derp enough to disallow the model just 'walking' on the ocean floor?

so i had to do duplicate anims and tweak a few things. But now this stone naga is fully amphibious

So.. this is a model animated by.. How many people?

we have Thrikodius, we have Raph the Great, we have Hayate.. and I think UgoUgo also had something to do with it, but i am not quite sure.. It's old enough for me to forget

Originally this was my 'Naga Brute' model, which could be found on.. I think it's called Trishroom now? oO But i had so much trouble with its bones, particles, and anims, that i decided to re-tweak as much as i can and finally get it to a state where he actually feels like a complete hero. Unfortunately, that meant i needed to remove the swim anims, but it wasn't that much of a problem, as i found a perfect skin to match; Titan Serpent by Daenar7

So i present; Titan's Guardian. a Naga that has been granted stone form by whichever Titan-related entity that was left behind after they left Azeroth

P.S. don't bother me if anims are not that good, it's old

he, is, pretty, rocky
Contents
Reviews