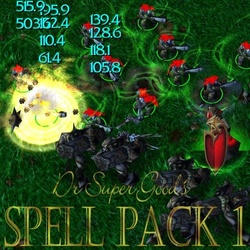 My first spell pack which was designed to test out the power of vJASS, and now updated to utilize the new features of the upcomming patch (built with V1.23b).
Why a beta? Well firstly because there have been major improvements since the first one and secondly because it demonstrates the use of (1.23b) changes within WC3. Until the actual patch is released and may of the bugs fixed, I will not be able to finish optimizing it and until then some bug reports would be useful. Note that only the holy protector hero is meant to be used currently, the black mage's spells are still in development although you can see their desired effects.

NOTE - All triggered spells need vJASS to work and so will not compile in normal WE. Download jassnewgenpack to use them in your map.

This version contains 3 triggered spells which are meant to be usable and to my knowledge bug free. Constructive feedback would be nice so that I can improve the spells further as there still may be one or two bugs which I overlooked.

The spells the Roayal Defender hero has are. . .

Counter
Non-triggered initial skill but used by one of the other abilities which is triggered. Reflects 100% of taken melee damage taken back at the attacker under normal conditions.

Protective Field
Triggered spell that creates a damage absorbing shield around the caster. The shield will absorb a fixed ammount of damage before being destroyed and will not time expire. Also capped at a quantity based on the caster's maximum hitpoints.

Defense Matrix
Triggered ultimate spell that acts as protective field but on all nearby friendly units for a limated time. Ammount absorbed depends on the units maximum hitpoints and the casters strength. The caster of this ultimate gets more shield absorb from max hitpoints (higher percentage).

This also includes some in development spells for a planned hero called the Black Mage.
They are as follows (only one so far) . . .

Fireaga (spelling might be delighbertly incorrect)
Causes damage to all units in the target area one at a time with delay. The exact workings of this spell are very complex and so I will not mention them here for now.

All triggered spells are fully MUI ofcourse and should be completly leakless (need confirmation).
The map also contains a system I made for damage absorption, as seen by 2 of the spells. This system currently has incorrect and lacking documentation but allows for easy stacking of damage shields which absorb damage. Both timed shields and permant shields can be stacked using this system, however timed shields are damaged before permant ones. It allso allows any number of effects to be attached to a unit for both tempory and permant shield parts and the attachment point can be specified. The system currently lacks support for non 100% absorbing shields and advanced stacking of shields must be programmed into individual spells. Also the system has no support for units which die through the shield, in which case a shield object will be leaked and all effects involved as well. The system is pretty tightly optimized for the support given, however current bugs with version 1.23b prevent even tigher optimization so look out for improvement sin the future. This system still destroys triggers, so be warned.

These spells can be used as templates by simply copying the libaries they are in and renaming them to a different name. Finally just fill in the constant data for the new library and the spell is ready. It will not interfear with the spell (or spells) that it was based from as long as the libary names are different.

The Royal Defender concept was inspired by Diablo II LoD's iron maiden spell inflicting inhumane ammounts of damage back at melee attackers. Although it looks not the least bit simlar, the idea was to make a hero that deals almost all its damage by taking damage and is totally usless against ranged units.

The Black Mage concept was inspired by the final fantasy turn based RPG series. Although it is nothing like the Black Mage seen in that series, it still steals some ideas and effects (most noticably the complex damage formulas).

This map also contains a bonous tank spell I made that fires shockwaves in different directions for a custom model. The spell was more for testing than use but goes great with the CrazyTank model that was submited to this site (The Hive Workshop) and is recomended to be used if you use that model.

Be aware that the spell map supports up to 2 players tesing the spell at once so that it can be used on battlenet to show friends or potential users what the systems can do.

The spells are free to modify, use or redistribute as long as credit is given to me for the orignal.

Have fun and enjoy testing these spells.

Remember to comment if you want to help improve this spellpack.


Change Log
V1.1 --- V1.2 beta
Total overhaul of almost every spell. Very little code still remains from pre 1.1.
Damage shields now stacks properly with both timed and non timed versions.
Attract will no longer bug if cooldown was shorter than duration.
Damage shield system redone so as to support a near infinate number of special effects efficently and use faster hashtables instead of loops.
Damage shield system is now bugless, a unit with even 1 hitpoint will be able to survive nearly any quantity of damage as long as the damage is less than the dummy ability.
Reworked the mechanics behind some of the spells to allow for easier ballencing.
Added a common hashtable object used by the spells, spells and systems which store stuff on the casting unit store at a special index decided by spell string, to prevent bugs occuring, this much be changed if a unit uses the same spell twice.

V1.0 ---> V1.1
This version was a major overhaul of all spells and systems contained so that they performed better. It however never was released.

V1.0 beta ---> V1.0
Fixed bug with the tank spell not being on the tanks due to the chaos ability.
Smartened up the floating text (text tags) a bit to match those normally ingame.
Made the damage shield quantity display text show no decimal places.
Made the floating text tags show only to players who have LOS of the unit it is being displayed for to prevent location give aways through the fog of war.
Polished testing environment a bit more.
Fixed testing slots to be more convienent.
Added new hero + spell for the testing (needs documentation).
Tons of documentation added to abilities and systems to allow for easier importation and use.

WARNING - ONLY WORKS WITH 1.23b OR NEWER VERSIONS OF WC3

Moderator
Dr Super Good: My greatest triggered spells I have created as far as efficency and support goes. Violates no rules (ofcourse) and garuntees the user leakless and top quality hero spells. Great for hero defences, Footman Frenzys and even, with some...
Read full review...
Reputation Statistics
Page 1 of 3
Show Ignored Content
Page 1 of 3