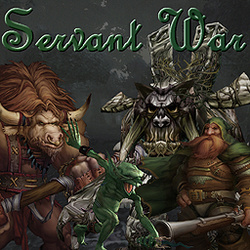 Idea and Gameplay
The aim of the game ist to destroy the enemy headquarters. Bring a Townhall of an enemy under 0 HP and he will become your servant and will join you in your team.
If the HP of your Townhall drop under 0, you will become a servant. Therefore you must make all other players your servants to win.

At the beginn of the game you have to choose one of five races and build the main building. Then you must construct a goldmine to get income and upgrade it.
For every upgrade you get additional 20 income every 20 seconds.
The game is simpe that means every race has only 1 building to train 3 different unit types and a special unit in late-game. Besides you can research AOE spells in the townhall to support your units. To defend the headquarter all folks are able to construct tower. Furthermore all goldmines have a defend spell which damage enemy units arround but every time a player uses this spell his income is reduced.

The dwarfs are able to upgrade their goldmine very hight and they can train Riflemen, Dwarf Warrior, Mortar Teams. The special unit is a powerful Tank which is useful to destroy tower.
Spells:
Invisible Attack: Create Dwarfs at the target position of the map
Flashbang: Alle units in the target are cannot attack
Circleof Fire: A large ring of fire and all unit who go through the flames gets lot of damage

Confusion: 33% of the enemy units in the target area become stronger and join neutral hostile. This means that they attack all players.

For the demons its more expensive to upgrade their goldmine. They train the Doom Guard, Felhounds and the ranged Infernal Machine. The special unit is the Demon Assassin.
Spells:
Blade: Create a deadly blade which damage all units arround. Besides all units move into the direction of the blade.
Tornado: Slow all units in the target area
Fire Rain: a wicked rain of fire

High Elves train Soldiers, Priests and Sorceress. Their special unit is the Wizzard.
Spells:
Support Tower: Creates a Support Tower which lasts 120 seconds and helps your units with 3 auras.
Blizzard: Calls down freezing ice shard waves damaging all units in the target area.
Resurrection: Revives dying friendly units in the area for 15 seconds.