Dan van Ohllus said:
Yep, it's Dr. Ivo Robotnik (aka Eggman). But I've decided to make the "Adventures of Sonic the Hedgehog" cartoon version of him. 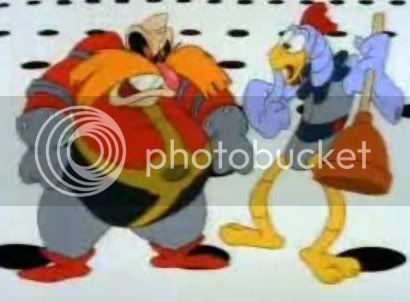 Dr Ivo Robotnik and Eggman are not the same!

syltman said:
Dr Ivo Robotnik and Eggman are not the same!

Wikipedia said:
Eggman has been known by different names in various Sonic media depending on region. In Japan, the character has always been known as "Doctor Eggman". However, in early American and European games and media, he is known as Doctor Ivo Robotnik. Yuji Naka has explained that "Robotnik" is the character's "real name" while "Eggman" is a "common name taken after his shape."[6] Beginning with Sonic Adventure, Sega began referring to him more as Eggman in both languages, with the use of the name Robotnik becoming rare
Click to expand...

In conclusion, Dr. Ivo Robotnik and Eggman are the same.
It's just that the old animated cartoons had different appearances, the AoSTH version having a more comical look, and the SatAM version have a very sinister and dictator look.
Heck, the first Eggman/Robotnik from the 16-bit Sonic games have somewhat a different appearance than the current version.

I'm guessing you're confusing Ivo Robotnik with Gerald Robotnik or something like that.

Icons 1 Packs 1 Maps 5
How old is this cartoon? 20 years? Why not making an new version of it?

Models 11
Because it's not your choice to make, so zip it.

But his body looks like a ball. In the cartoon, it's more oval-like.

HFR said:
But his body looks like a ball. In the cartoon, it's more oval-like.
Click to expand...

Dan van Ohllus said:
To do list on the mesh:
- Add a head.
- Fix the proportions a bit (mainly making him look more like a fatty like in the cartoon, plus thicker legs).
Click to expand...

So I am aware of the model's shape.

An attempt to make a flying nerubian wasp-like female unit. I improvised with the construction of this model.
Head is still incomplete, and I have yet to come up with a good feminine insect face.
Plus she's nameless, and I don't have an idea for a fitting name for this unit yet (Nerubian Stinger? Nerubian Air Diver? Nerubian Princess?).

Icons 1 Packs 1 Maps 5
Nerubian Air Diver is too militarysh for an female nerubian. Stinger is a good one, but it's a very male name. Princess is ok, though.

Models 16 Icons 3 Packs 1 Skins 8 Tutorials 1
Gah. I wish I could model for shit. Whenever I model, there's some problem that can't be seen by the untrained eye, yet it ruins the entire model. 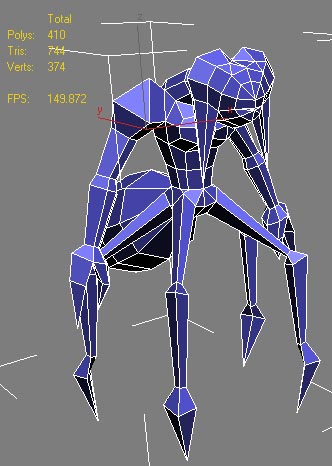 Models 16 Icons 3 Packs 1 Skins 8 Tutorials 1
They look kind of stiff. Even for a static model. :B

Tutorials 1
I guess they will look pretty good once they are unwrapped.
Nice concept so far 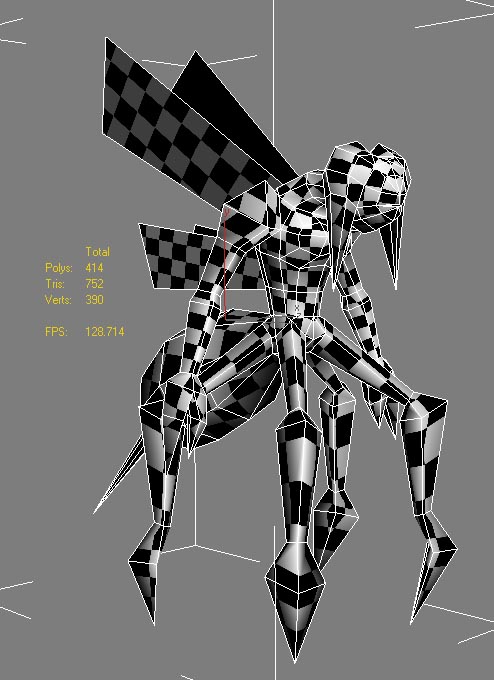 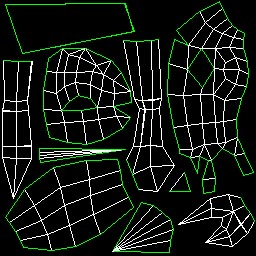 Next task is texturing.

Models 11
I do hope you're going to texture it.

frostwhisper said:
I do hope you're going to texture it.
Click to expand...

yeah i expect much from you DvO 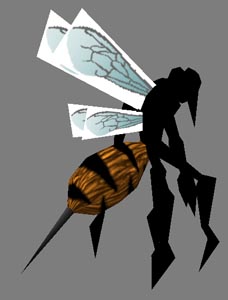 Models 1 Tutorials 1
Agreed, looks more like a bee than a nerubian to me, I think it's the colors, but I'm not sure.

Models 5 Icons 1 Tools 1 Maps 1 StarCraft II Resources 1 JASS 2 Tutorials 3
I suggest you to make the teamcolored areas match the orange texture. There's a very good technique to do so. Take the complete texture (without the black strokes) select the area where the blackstrokes go. Change from RGB Channel to the (Red,Green or blue)channel in which the texture looks better. Copy then paste on the alpha channel and inverse the lighting. Afterwards, Paste once more on the RGB channel of the texture(don't inverse this time) and burn up the new layer until it be near to black, make sure that there be distinction between highlights and shadows while burning, if needed, retouch the highlights with some dodge. That should give you a very good looking team color that adapts to the texture.

What I'm doing is to remove parts of the abdomen texture to make stripes, then removing the background, making the stripes completly transparent. I then add dark shading on the edge of the stripes (using a brush with a low opacity). I also have a dummy layer with red color to see how the shading works.

So here's an example of how the abdomen wrap would look like when the model get's exported to mdx, plus a pic of the unwrap with the red dummy layer. 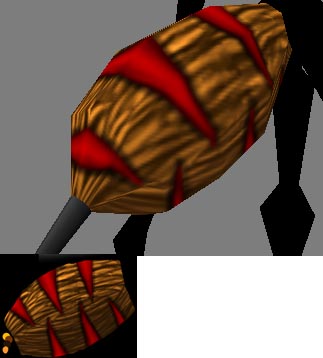 Icons 4
Reminds me a bit of that bee pokemon D:

Looking sexy so far though

X.e.r.e.X said:
Reminds me a bit of that bee pokemon D:

It's certainly more adult than that pokemon.

Models 22 Icons 1 Skins 1
But the lord has a bright white/orange color, I will wait to see the texture done, because only the abdomen dont talk much. 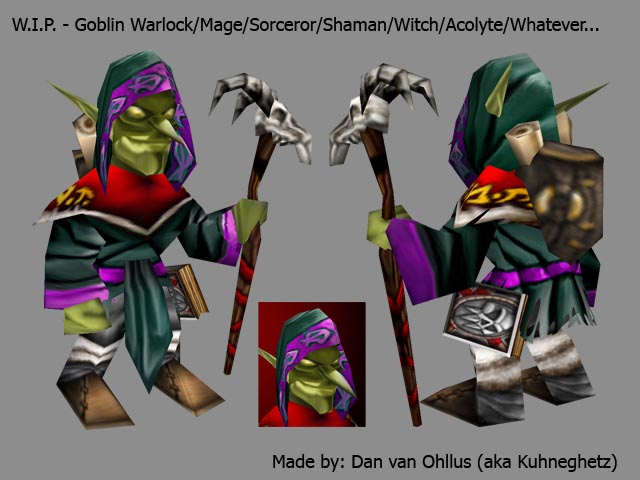 Thought I could make a Goblin unit for once, and the model database lacked Goblins with magical powers.
I'm not shure what class name I should give it though, thus I entered whatever in the image.
The staff is just a placeholder and will most likely to be replaced.

Models 63 Icons 23 Packs 1 Tutorials 2
Looks very clean for a mdl edit, however, the head should be smaller I think.

Maps 2
Hows the progress going, and when those models gonna be finished so you can release them for download.

BTW can you make me one Naruto model ?

HappyTauren said:
Looks very clean for a mdl edit, however, the head should be smaller I think.
Click to expand...

I think it's due to the hood that makes his head look quite big.
If you look at him without the hood, like in this picture, you'll see that his head size isn't bad. 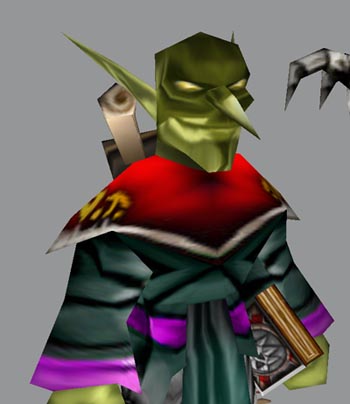 The reason I gave him the hood is due to the shading on the face part of the goblin textures, plus the head mesh has a hole on the back of it.
I really don't want to shrink the head, or else the model would lose the anatomy of the wc3 goblins (and even wow goblins).

Models 63 Icons 23 Packs 1 Tutorials 2
I still think it should be a little smaller, regardless of the hood. 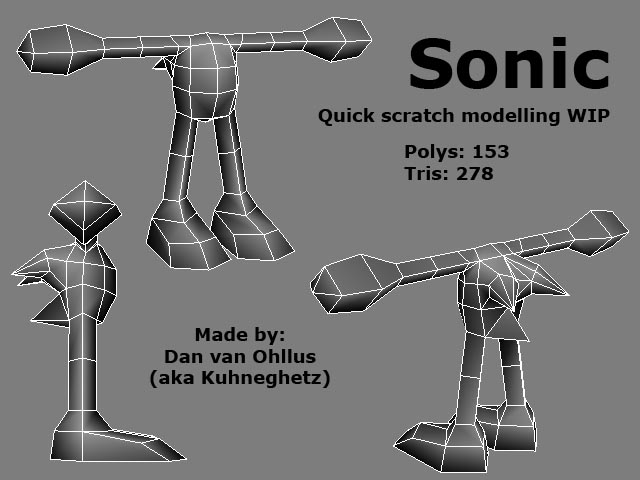 Wanted to make something quick, so here's a quick half-assed lowpoly Sonic model. Took about an hour to make this progress.
Not sure if I'll bother finish it due to other priorities.

And no, this is not for Warcraft. It's just a quick placeholder model for a personal game development project.

He'll need a sword though, I know. And I'll probably give him the Proudmoore/Arthas/Paladin animations since it's smoother than the Blademaster animations, even if it gets linearized.

I lkie this one.
Ps: Can i get the marine and space orcs portraits?

Please bear with the horrible GIF compression and the odd perspective angles on most images.
The model is actually laying down on the grid, because the game engine (Unity) we're using tends to rotate exported models (Autodesk .FBX) to 270 degree.

"While strolling through the park one day...
In the merry merry month of May..."

"I've fallen... and I can't get up!" Hehe, no. It's an attempt to make a running animation. Don't mind the skinning glitch on the feet.

is the fat rabbit now a wc3 model?
looks funny and cool

Thought the resource database could use some more royalties, so here's a queen model I'm working. Decided to give her a more elderly style with a red-esque dress, and of course 100% ingame textures.
I'm not sure about her arms though, so any better suggestions for ingame textures would be nice.

And yes, she will have a crown, duh!
I'll probably add a necklace too.

Models 1 Tutorials 1
Looks good, although I find the texture on the bottom-part of the dress a bit to repetitive.

Updates:
- Crown added. I gave it the more stereotypical queen-esque style. Blue is where Team Colour is.
- Neck and hair slightly adjusted.
- Added that white thingy behind her head (dunno what these things are called), adding more royalty to the dress. Those things are often common in some queen dresses.
- Texture change on the shoulder fluff pads. Blue is where Team Colour is.

To do-list:
- Add necklace.
- Still unsure about her arms.
- Give animations (I'll probably give her Villager Woman anims with extra transfers)
You must log in or register to reply here.