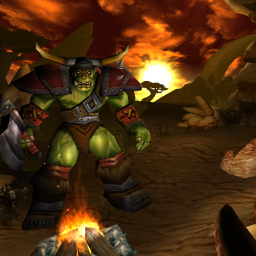 "Following the mysterious Prophet's instructions, Thrall led the Horde across the Great Sea. Now, after weeks of traversing the raging seas, the orcish Horde has landed upon the savage shores of Kalimdor. With their stolen ships broken and drowned, the orcs cautiously venture inland, wary of the unseen dangers lurking within the crags of the desolate land..."

Level Description: Thrall arrives in Kalimdor but his people were seperated in the storm. He must travel across the coast of Kalimdor to find his people. On his way he encounters strange beasts, but also the Taurens - a new ally.

Tutorials 1
Oh my god so it's finally here! I'll be sure to play it if possible sometime.

I had always hope for this great project. It's perfect that you perpetuate it. Keep going.

Maps 2
Whaa! I completely forgot about this project (and its awesomeness). After seeing the map in the maps section, I can build a nice brick house

EDIT:
Thx rest for nice comments,
Let me know asap if you find any bugs.

yaaaaaaay it's back. can't wait to try it out

Please fix memory leaks so I can approve map!

Cool collection btw!
Thanks and have a nice day!

Maps 4 Tutorials 1
how come Nazgrel is a war seer instead of a raider? like from the rexxar campaign? I'm gonna try this map! there's orcs in it

Packs 4 Maps 52 Spells 1
Unfortunately -kobas-, blizzards triggers are full of leaks D: (Those triggers aren't my own)
So basically if you reject this, you're rejecting the original WC3 campaign.

And the task I'm doing already is a Mammoth one.
(Converting all the campaigns into 2-player)

Removing the leaks would probably double the time taken to release the maps.
So I'm just gonna try get them all released, leaks are unoticable in a 1-play through game anyway.
Tbh, I don't mind if its not approved. I think people just want to play them asap D:

Also Nazgrel is actually a shaman, (not a raider), see here: http://www.wowwiki.com/Nazgrel

oh thank you for the info in WOW, I don't play the game, but i'm a big fan of warcraft, yeh it now makes sense, since there is a far seer named "Nazgrel" in the meelee maps.

Icons 2 Skins 2 Tools 3 Maps 10 Spells 5 Templates 5 Tutorials 6
Well blizzard made large number of errors right ^^
That's why I told ya to fix only those 2 t riggers, they are main problem because they run each 5 seconds and each time when unit die (more or less)...

Templates 1
ok I got a quick game with someone unknown we started on Insane Difficulty
The Cinematic were somewhat like fast forwarded, I don't know if it's intentional but probably it's some leak as I do remember you enabling some Vote (ESE Button) for not watching them in the last campaign.

EDIT: Ah yes Kobas, thats fair enough, I'll do that then.
And keep an eye out for more as I work through the campaigns.

Maps 2 Spells 1
Will play this ASAP

Hurray, the Horde has arrived!

Maps 1
Nice, control of Cairne at the end of the level. Gj

As expected of your 2P maps )
Mainly looking forward to Night elf Campaign!

Omg amazing work! Gonna test it with my only friend who still plays wc3. Thanks.
You must log in or register to reply here.