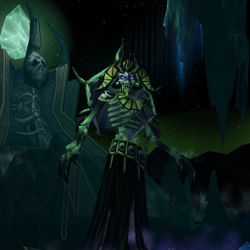 Undead Campaign: Path of the Damned
Chapter 1: Trudging through the Ashes

"The Lich King's plague of undeath has spread through the Capital City and into the outskirts of Lordaeron. Shocked and disheartened by the loss of their beloved king, the forces of Lordaeron were scattered by the ravenous undead warriors. Now, Lordaeron is but a shadow of its former glory - and Prince Arthas has yet to be seen..."

Level Description: Arthas has returned to Lordaeron. After ressurecting his steed 'Invincible' at Balnir Farmstead, he is approached by Tichondrius a Dreadlord. He sets Arthas on the task of gathering the Cult of the Damned.