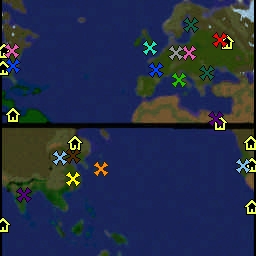 Basics: You receive income when the timer in the top right expires. Use this income to train and upgrade your army, navy or airforce. You can also construct factories for more income/production, build Airfields to add more supply stations for your planes. There's fortifications to defend your land better. What you're mostly defending are your small-large-colonial cities and towns. You capture these by attacking them down to 35% Health. Factories can be built but only on cobblestone located around cities.

You also get income from merchant ships that spawn and automatically go to a friendly harbor. They are weak though and vulnerable to enemy ship attacks.

Supplies: Air and Naval units require you to keep them stationed near airfields or harbors. If their supplies(Mana) runs to 0 they will die.

Note: You are not allowed to attack allies or countries you are not at war with, you must wait for historic events to bring you and them to war to attack.

Armor:
-Light, Medium, and Heavy Tanks.
-Anti-Air Tank
-Artillery(Need to be packed and unpacked to switch from movement and attack mode.)
-To Be Continued(Need Suggestions)

The nations are sorted into their historical Axis vs. Allies at the start. USSR, and USA join at later times in the game. They should spend the two years prior to joining building up.

The Minor Allied/Axis nations start with only a few countries and when historically the other nations join they will according to the date.

I'll be adding in Rockets and Nukes in later.
The same with nation specific unit designs such as, ME109's, Sherman Tanks, Waffen-SS ect.

As I did with Age of Napoleon, I'm re-opening my old project WW2: World in Flames. I'm not sure anyone would remember it.

It's a WW2 map that has both theaters of war. It's a 480x480 map that is split down the middle and has the pacific and european theaters of war without the rest of the useless world.

I'm looking for suggestions on gameplay, This map is still in late beta stages.

I'm open to all suggestions. I want a good WW2 map, not a laggy one, nor a simple one, one that encompasses all the virtues of previous WW2 map with none of the vices.

Downloaded the map will test and comment soon enogh
Edit:Tried the map.Slight Prob found is my artillery auto repack itself after i unpack it is that a bug? or u place it there on purpose.
The turn of event is kinda slow and some player wont enjoy it and whats the black line in the middle of the map? i cant seems to get pass it and i dont know how to get pass it lol. btw do the aircraft carrier give mana regen to other ship? its like i cant get the mana to regen when the ship is beside my aircraft carrier.
Suggestion:Maybe you could make the aircraft carrier able to summon planes out at a more expensive price then building it from the factory. =D Plane maybe The Zero fighter for japan which is stronger then normal plane but need longer and more gold to build.Kamakazi plane where the japanese use Can be destroyed easily but cause huge damage.Transport Plane where only infantry.For Armour unit:Howitzer(ps cant spell) Its like artillary but with splash dmg. Motars Unit,Commander Unit Which give aura but have slow attack and little dmg.Maybe You Could Split the Infantry into Rifle and Machine Gun Unit Rocket Unit Which is good against fortification and make flame thrower unit only effective against infantry so it would be more realistic.
Thats some suggestion =D Really nice map and it dont lag badly like previous version of ww2 map =D
Last edited: Mar 15, 2010

Icons 1
i remember this old map, it was a complete disaster, it lags like hell, but now its way better. +rep for improvements.


ACdestinydream said:
i remember this old map, it was a complete disaster, it lags like hell, but now its way better. +rep for improvements.
Click to expand...

Thanks, I completely re-did everything. The only thing this shares with the previous map is the terrain shape.

not done testing yet dont really get player to play

Tested it and just wanted to share some insights:

- West US spawned hundreds of merchant ships at once and did not follow the designated course, just stayed there in the coast to clutter up.
- Aircraft carrier can't load air units (I noticed the "Load" command on the Carrier and figured it would be a great idea for a carrier to actually "carry" aircraft.)

- Infantry are a bit too slow. Maybe a land transport unit such as a halftrack could make things easier.
- Add Australia, then move MacArthur there.
- Artillery range needs to be improved.
- Events should go a little faster. It was really annoying to wait some 20-30 minutes before the attack on Pearl Harbour.
- Planes should "auto-return" to a nearby airfield when out of fuel.
- Submarines need to be a lot more stronger. It was odd to see 4 Japanese subs unable to sink even a single unescorted merchant ship.
- Either the damage or the attack speed of infantry needs to be improved.
- Tactical Bombers are pretty useless unless the damage was upped a bit.
- Bombers can't capture cities, that's fine but the cities regain full HP
when damaged to the point of capture. It's annoying.
- What, no benefits/consequences after a capital is captured?
- Change the tooltip for Gold.
- Change "Flak bunker" to "Flak Cannon" or better yet "Anti-air gun".

Does this map have AI? I guess it would for the Historical Events.... but I am just wondering

Maps 4
The terrain is just bad in more way than six.

Reject.
You must log in or register to reply here.