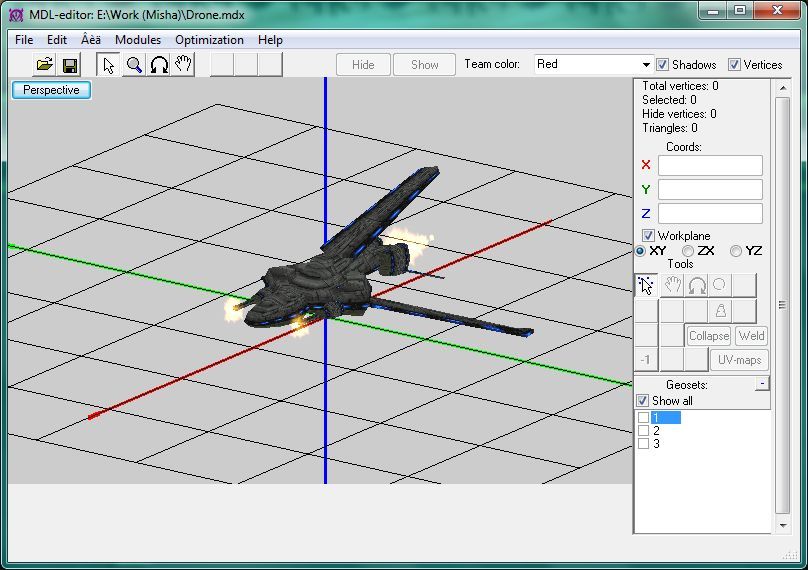 This bundle is marked as approved. It works and satisfies the submission rules.
View usage Statistics Legacy download
Reactions: ArthasStormrage2007, xw1995327www, Bresthelm and 5 others
This tool originates from here

Mdlvis, a pretty easy war3 model-editing and animating tool.. it can work around the mesh and rewrap quickly, separate geosets easily, tweak normals, transfer meshes from one model to the other and rig them, position bones, particle effect nodes, attachment points, can make global, and regular animations, can compress and optimize models..

This tool was originally created by Alexey from xgm.ru.

Note to those on patch 1.28+:
Due to some of the archive changes/migration in 1.28, you may run into some issues getting MDLVis to run. Check out this post for a potential solution:
Mdlvis

HEY!can i make models with this tool?

This tool is already posted.

Sorry, but this tool is already posted in the site.

moshimashi said:
This tool is already posted.
Click to expand...

Roland said:
Sorry, but this tool is already posted in the site.
Click to expand...

Can any of you two link towards it?

moshimashi said:
This tool is already posted.
Click to expand...

Roland said:
Sorry, but this tool is already posted in the site.
Click to expand...

Models 6 Maps 1 Spells 3
hmm this is weird, hive didn't have mdlvis all this time?
also which version is it? there is a version that's buggy in the preview...too bad i can't test now...

What is better in this tool than w3 model editor?

can someone help me with UV map editor. can i somehow change .blp tiles in UV map editor, for example blizzard have ice.blp, and I want put some another .blp like flame4.blp?

Models 2 Maps 1 Spells 1
I was about to be all "HEY GUYS, I FINALLY FOUND THE CREATOR!", but I just checked the topic and hey, it's right there at the top in the Credits. Guess I just never thought to look. :<

Anyway, it's still a cool read (hard to do so with the Google Translate, but...). Original text here.

Models 12 Icons 6 Skins 1 Maps 3 Tutorials 4
Can someone explain to me why this tool has (outdated) Warcraft 3 game files in its folder? The tool (only the .exe) is supposed to go into the Warcraft III directory (to use the game files). There is a possibility that these old-patch game files create an incompatibility which affects the models edited with this tool on the new patches (some of these old-patch files are even differently named than the new ones and one of them doesn't exist any more in the new patches).
On the other hand, when I downloaded the tool from xgm.ru (there, only the .exe is provided) and put it into the Warcraft 3 directory, MdlVis was really unstable and shaking all the time, which draws me to the conclusion that MdlVis is maybe incompatible with the new patches, and that's why it needs old Warcraft 3 game files to function properly.

Models 2 Maps 1 Spells 1
That's a strange set of issues... Not sure I've had it, myself (either the shaking or the incompatibility)...

Kyrbi0 said:
That's a strange set of issues... Not sure I've had it, myself (either the shaking or the incompatibility)...
Click to expand...

Untick the "Workplane" on the right and it will shake anyway. And for incompatibility, I'm not sure, but it's possible that those old outdated files create some kind of an incompatibility.
Last edited: Mar 22, 2017

Alerts: "It has been a while since you downloaded Mdlvis. Please consider leaving feedback and a rating."
Well, wanted to answer following question anyway, since there still is no info in the description:

xorkatoss said:
also which version is it?
Click to expand...

my feedback:
- bad: annoying bug: you cannot open MDL files with any comments inside (= "//...")
- good: strong in MDX/MDL conversion: for converting i would prefer mdlvis, because it could convert the human cannon tower (the one with 3rd upgrade) while Magos just gave error msg!

Well...Use this can crash model's normals...So any other tools can be use??

You can fix it by having copies of the mpqs in the same folder as the mdllvis program.

Can you tell me where you found your old .MPQs, please?

I don't know about him, but I simply copy-pasted the MPQs from my standard Wc3 install folder a long time ago, when it was readily available (v1.26 maybe?). Since the MPQs are now 'hidden', all these old programs that directly utilize them will need a copy to continue doing so (& will probably miss out on anything new added (as unlikely as that is)).

It's worked pretty well for me so far.

Models 184 Icons 21 Skins 9 Maps 1
What I mean is, I can't find the original .MPQs and I'm wondering if I've gone and overwritten them by accident.

If this is the case, this update effectively ended my modeling and animating for Wc3.

HerrDave said:
What I mean is, I can't find the original .MPQs and I'm wondering if I've gone and overwritten them by accident.
Click to expand...

I don't know about 'overwritten', but from what I have learned (don't quote me on this), one of the newer updates to Warcraft 3 changed it's back-end in a number of substantial ways; most pertinently, it 'removed' or rather 'hid' the MPQs 'behind the scenes' so they are not readily accessible anymore. This has caused some frustration to folks like me who depend on custom MPQs for my stuff, and for people using those 3rd-party modeling tools (also like me) that depend on them as well.


HerrDave said:
If this is the case, this update effectively ended my modeling and animating for Wc3.
Click to expand...

Oh come now, no need to be hyperbolic. : ) I'm 100% sure you can get a copy of the older MPQs from somebody here (if it isn't already uploaded somewhere on the Hive). Heck I'd do it if I could figure out how.

Models 36 Icons 29 Packs 2 Tools 3 Maps 3 Spells 7 Ported Icons 7 JASS 1 Tutorials 1
I used to have the Mdlvis .exe in the WC3 folder, that's why I didn't have any copies of the MPQs.
I still had a 1.27 installer for both ROC and TFT downloaded from battle.net on my computer so I just copied the MPQs from that (they're in the Installer Tome.mpq).

I also have the War3ModelEditor .exe in the WC3 folder, which still works fine.

*Edit 4 years later
Yes they do!
You have to put them in the same folder as the executable, not Warcraft 3's installation directory.
Last edited: Feb 18, 2022

Models 14
I also seem to have the same problem. And I really need Mdlvis up and running again smoothly. Are 1.27 MPQ's somewhere to be found on the Hive?

Models 36 Icons 29 Packs 2 Tools 3 Maps 3 Spells 7 Ported Icons 7 JASS 1 Tutorials 1
You could try torrenting the game. I found a 1.26 portable version (no install required so can run side-by-side with your real install) on TPB (which I needed to get JNPG to work). It's not illegal if you already own the game.

having a problem with mdlvis causing the model to crash during loading of the map even without using any of the optimizer features when saving some models in it.
Last edited: May 18, 2018

Models 14
Maybe this thread can help you: I edited a model with mldvis but when i put it in the game crashes

Models 79 Icons 1 Skins 1 Tools 6 Maps 12 Templates 1 Reforged HD Models 14 Ported Models 2 Sounds 3 Tutorials 1
Is this tool open source? I might like to play with the code.

If you need old style MPQs, here's a quick fix: download build 3 from this MiniWc3 link, it's 100 MB and contains ultracompressed MPQs from before the new patches:

When MdlVis loads the ultracompressed textures they're going to look low-resolution, but I think it should get the program working again if you were stuck and don't like torrenting.

Models 14
Hey, that works! I don't mind the low-resolution, I can at least see what I am doing now without having to open up my model in magos model editor the whole time. Thanks a lot!

Models 2 Maps 1 Spells 1
Honestly, Magos does a few things that MDLvis doesn't/can't so gosh-darn well that I end up keeping both open all the time anyway. :< But yeah, glad you got that fixed.

Models 1 Icons 4
this program have any improvement for the 1.30?

Models 79 Icons 1 Skins 1 Tools 6 Maps 12 Templates 1 Reforged HD Models 14 Ported Models 2 Sounds 3 Tutorials 1
I am not aware of whether the developers of Mdlvis or Magos are still active at all. If they are active, I should talk to them about merging codebases with the Matrix Eater and building one single tool. So, if there is somebody updating Mdlvis out there, please message me.

Couldnt get it to work

@eejin Maybe update the bundle with it?

loktar said:
I found a newer version: [TOOL] MDLVIS 1.41 (Eng)
Attaching it to this post in case the download link goes down.

@eejin Maybe update the bundle with it?
Click to expand...

The perfect editing program for old WAR 3 models.
Easy to use even for beginners.

Maps 1 StarCraft II Resources 5 Ported Skins 2 Tutorials 1
Hey, when I try to open a Reforged model, I get a "range check error".
You must log in or register to reply here.

MDLvis Changes Bones Without Vertices to Helpers When Saving