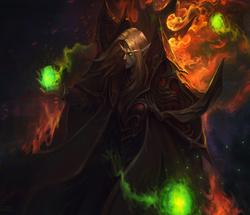 "Vengeance is all I have left." - The Blood Mage