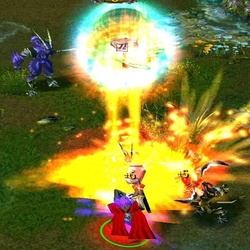 Summons the legendary Hammer of Thor to the hero's aid from the skies. The hammer hovers in the air, and launches projectiles at enemies nearby. After a while the hammer slams the ground, stunning and setting enemies on fire for three seconds. After the slam, the hammer rises up back to heaven.

Hammer of Thor is GUI, MUI and leakless.

The spell is easily configurable. You can configure

The spell uses imported hammer model, which is taken from an existing Blizzard model. It also uses a custom dummy unit with imported model.

v1.02
Changed the lines that turn off the periodic triggers from the end of the triggers to right after units are removed from the unit group. This makes the spell require less CPU time.

v1.05
Changed stun to be added by creating a dummy unit and oredring it to use Storm Bolt on units.
Removed one trigger, added its function to another trigger. This solved a bug that caused the hammer sometimes to not slam to the ground.
Fixed a MUI issue on burn effects.
Removed one wait, it was pointless. Using a timer bound to the hammer now.

v1.06
The hammer now unleashes the energies contained in it's enchantment as it slams the groung, causing it's effects to vanish.

v1.07
Better tooltip.
Units are now set on fire like they should be.
Added locust to the hammer dummy.

v1.08
Fixed a bug that cause dummy units not to be cleared when their target was dead.