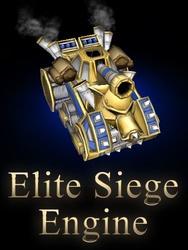 Also known as the Übertank. The model was made for the first Paired Modeling\Texturing Contest here at the Hive, also known as 'TAGTEAM BITCHFEST 3000', by me and l0w_kwaliti. We entered under the team name 'Green Quality'.

HUGE thanks, of course, to l0w_kwaliti, for pretty much making this model real. Without his help it would be a complete and utter piece of crap. He helped me out a lot with the model during its creation, taught me a lot I didn't know about modeling and pretty much 'made the dream possible'. And of course, not to forget the über textures he's made for the model!

I'd also like to thank TurieL and his Rifleman Elite model for inspiring me in the first place, before I joined with l0w_kwaliti for the Paired Modeling\Texturing contest. I think his model is one of the best ones around. It's got it's own 'charm' while still being Warcraft 3-like.

Moderator
21:29, 7th Sep 2010 General Frank: Impressive work you did there. The texture is awesome and the animations are nicely done. Works in-game. Approved. Will get rating after the contest.
Read full review...
Reputation Statistics
Page 1 of 3
Show Ignored Content
Page 1 of 3