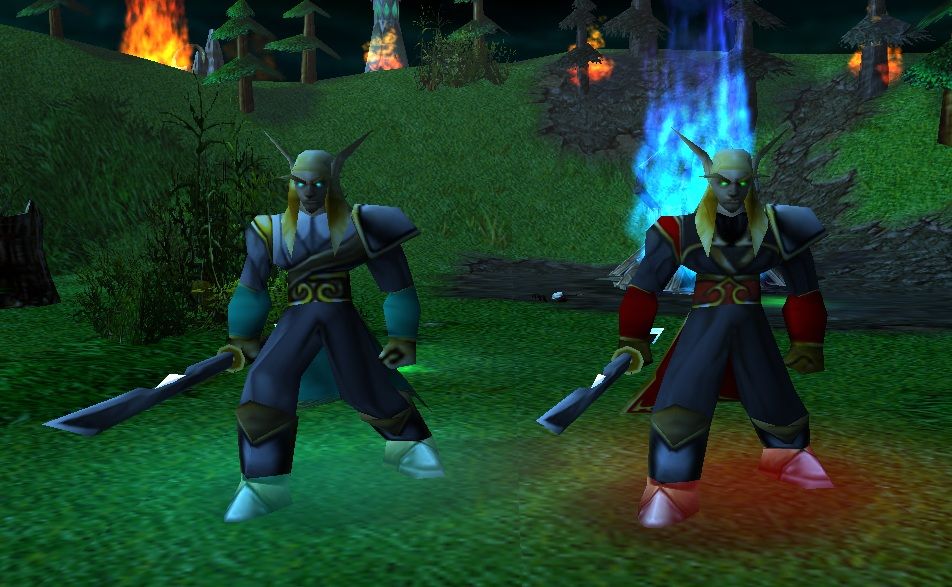 This bundle is marked as useful / simple. Simplicity is bliss, low effort and/or may contain minor bugs.
View usage Statistics Legacy download
Reactions: Cokemonkey11, Forsaken, Stefan.K and 1 other person
Model I made for my campaign. He's High Elf elite Spell-Breaker, who uses blade and spells to fight his enemies. Animations look rather weird in model editor, but they work fine in game and world editor, so don't comment untill you see them in game. I made stand channel for storm spell (starfall with lightnings instead of stars).

Model uses only in-game textures, feel free to use or edit him, just give me credits .

EDIT1: I like his portrait, it's good enough for me. Darker parts of his face are now shadows of his hairstyle, so they don't look so weird anymore .

EDIT2: I fixed cape in stand2 and walk anims, it works in game, although anims still look weird in any other model viewer than world editor. Slightly modified hair's wrap.

EDIT5: slightly changed textures. I've made new spell anim and added 'Spell Channel' anim (feel the power of the dark side!!! ). I also improved other anims

EDIT7: I realised that I forgot to upload portrait .

EDIT9: improved wrap on his body and hair, changed face texture, model now has camera instead of portrait. I also added Blood Elf version as complementary - it has different body texture and eye colour.

EDIT12: Updated animations - attack and stand ready are now custom instead of blademaster's. Stand ready and spell were inspired by Jedi Sage in SWTOR, and attack animation is similar to basic attack in Iaido

22:23, 17th Apr 2015
MiniMage: The model looks nice, but I think you could add more team color. Also, there's numerous case of clipping in animations. Work on these things.

Models 64 Icons 1 Packs 2 Skins 4 StarCraft II Resources 2
umm.. this face really won't do, because the majority of it has this darker part which is shading for the mask.. maybe you could tweak that or re-add the mask..?

and.. why is his cape and hair twitching slightly?

Models 192 Icons 124 Packs 6 Tutorials 2
Although I have to the agree with Misha on the face here, I think the rest is totally fine.
Nothing that has not been done before, but still worth the time you put into it

Models 121
I totally love this. Yeah, i don't like the face either.

Maps 3 Templates 1
For me, his face has nothing wrong. I feel it's in an acceptable state. As for the rest of the model, I find it pretty cool.

Very cool model! Great job and thanks for sharing!

Face looks great by the way. You should keep it!

Anyway, Greatjob!! This Can be High Elf's Melee Unit
And I like the CLoth Thing Behind him

Looks interesting from the screenshot
Face is just a bit dark, like if he got tanned
I specially like the cape
4/5

hair wrap however.. is just all over the place.. try to make it much, much better than this..

and .. this hair and cape twitching in stand, walk and maybe some other anim.. it's really making my eye twitch.. sorry if i'm sounding mean.. but you reeeally gotta fix that... weird animation issue

Models 36
Isn't the DH face the same than the priest and breaker? In that case "transplant" the eye section could be a solution.

Models 2 Maps 1 Spells 1
This is a surprisingly elegant model. Simple, but gets the job done & in a very Warcraft-y way. A High Elven Blademaster? Neat-o. I particularly like the (Direfury-styled) Spell Channel (though it could use a bit more arm/chest motion)

I'm a little concerned about those face shadows (as everyone else), but really, nice work.

Models 44 Packs 2 Spells 1
I can fix it by:
a) adding new geosets
b) making custom texture from DH's hair
c) trying to rewrap it with in-game texture
I'm gonna try c) again, coz a) & c) will increase model size to insane amount.

Tutorials 1
I quite like the face, though you must put some more work in to this model.

Models 36
The left hand wrap is in the wrong direction o.o

Himperion said:
The left hand wrap is in the wrong direction o.o
Click to expand...

Thanks, I haven't noticed that. Fixed.

Skins 3
Are you sure about his face? I think it could use some better texture (priest or maybe blood mage).

I would like to use this model for main hero character of map i am editing now. (its Ghostlands and that hero is Ranger Lord Renthar Hawkspear) But i would like to have brighter face...

Skins 4 Maps 1
I like where this has gone so far, but I honestly believe the boots and knee pads from Arthas are a tad too large and out of proportion for the Wc3 standard.

Models 51 Icons 1 Skins 1 StarCraft II Resources 2 User Interface 1 Tutorials 1
you should create a portrait animation, so that a separate portrait model is not necessary, this will save space.

kellym0 said:
you should create a portrait animation, so that a separate portrait model is not necessary, this will save space.
Click to expand...

I did - complementary model ain't portrait but blood elf version - model has 84 kB, there are just two models.

EDIT: I have no idea what the hell is going on with Hive viewer - it shows both main and complementary model at once and doesn't show High Elf's eye colour.
Last edited: Jun 29, 2015

Thanks, I was thinking about givin' him Kael's face, but I found this texture, which is the best face texture in game IMO .

Maps 3
Good changes made in other version it was have a so crappy attack and thanks for adding attack 2
Last edited: Aug 12, 2015

Wow
You must log in or register to reply here.