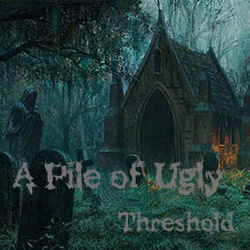 
Well, it's been a while since I last visited these halls, but I have a treat in store for all of my fans (if you guys still remember who I am

). I have been working on something this summer (a lot of things, actually, but this one is the only thing warcraft related). I started recruiting voice actors and I finally got my last recordings a few days ago. Now, after all this time, I am ready to introduce yet another innovation to the warcraft cinematic universe. This time, however, I'm bringing something closer to home and not as exciting.


Motivation
Most cinematics revolve around a linear story, with basic concepts, such as good vs evil. Evil beings or gods looking to destroy and heroes to defeat them. Battles and special effects. It would seem we have lost story and character built. With this, I plan to expand on what "The Cult of the Damned" originally was meant to be - a real movie made in warcraft.


General Idea
"A Pile of Ugly" is more than a warcraft 3 cinematic. It isn't another story of right and wrong, nor is it a story where you can clearly see who is the hero and who is the villain. It is a story of people. Simple as that. People, as gray as can be. While the first part in the series, "Threshold" focuses mainly on introducing the characters, as well as setting the initial story, the latter parts (which, knowing myself, might never come out) will focus on developing these characters, all the while progressing the story towards a very uncertain ending.

Basic Story
"A Pile of Ugly" follows the story of one Borigard Smith, a veteran character who showed up briefly in the Sect of the Holy Mother 7 - The Siege of Zambilion, as well as in the Clown of As'Latur, where he was the main narrator to the story. We see Borigard Smith who, after over thirty years of adventure and trading, has decided to retire to his home town, As'Latur. It is not long before Smith realizes that his beloved home town has become a den of thievery and crime, lead by the man who currently runs this town. Smith has to find a way to deal with the situation, all the while battling some of his own demons as well as the mysterious forces that lie in every shadow of Kaliim.

Additional Story
"A Pile of Ugly" takes place in a fictional world I created, known as Kaliim.
You can find a map of Kaliim here.
You can take a look at my finished cinematic series "The Sect of the Holy Mother", which tells the story of the rise and fall of the Holy Mother, an evil god whose influence and power helped shape Kaliim to what it is today.
You can take a look at my unfinished cinematic series "The Lone Panther", which somewhat continues the story of the previous installment, focusing on the left overs of the destruction of the Sect.
You can also take a look at an independent cinematic, titled "The Clown of As'Latur", which could, in some ways, be considered a prequel to "A Pile of Ugly", as it focuses on the same town, only a few years prior. The story told there will also play a minor element in this series.
All of these cinematics can be downloaded from here.

Moderator
Vengeancekael [img] Date: 2012/Dec/01 13:58:56 [Please do not send me a message, use Staff Contact] [img] Comment:Definitely a jaw-dropping cinematic by CMarket again: Excellent voice-acting (some of them could be better, but it's the best you...
Read full review...
Reputation Statistics
Page 1 of 4
Show Ignored Content
Page 1 of 4