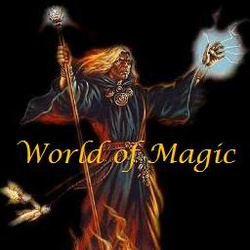 After months of work I finally finished the beta version of World of Magic Single Player RPG.

Story:
You are a young mage who wants to prove himself to the world and have to do various of quests in the world to advance to a higher stage.

Systems:
-Wands/staffs/rods:
You will always have one of these in your inventory, these will give you bonus damage to the magic you cast, but can also give various of special effects.

-Magic:
the usage of magic is your main and practically only way of damaging the enemy units. Magic is not an ability your hero has, but comes forth in items, with maximum 100 charges, everytime you use your staff/wand/rod it will use the magic in slot 2 of your hero's inventory. There is destructive, healing and effect magic, destructive magic is fire, blizzard, thunder, or later also fira, firaga, holy, quake, flare, etc. Healing magic is cure, cura, curaga and regen. Effect magic is blind, slow, protect, shell, stop and infection.
NEW FEATURE: Pressing the Up or Down arrow moves the items in your inventory Up or Down. This improves gameplay if you play with autocast, and even without.

-Drawing:
Drawing is what u need to do to obtain magic. This is a hero ability you use on enemy units. Each unit has a different magic you can draw from it, some units have the same magic, bosses mostly have better magic to draw from. You can draw 9 magic maximum each time you draw. Agility has an effect on the amount you draw.

-Healing/reviving:
You can carry an unlimited amount of potions, and these are shown on your leaderboard. Everytime you pick up a potion the number on your leaderboard will increase, and when you use a potion with the hero ability 'use potion', the number will decrease. There are also phoenix downs, aslong as you have more then 0, when you die you will be revived at the starting town. You can buy these in any town.

-Inventory:
The hero ability 'go to inventory' transports you to a closed area where all the items in the map you have collected will be available, like staffs, armor, potions u haven't picked up and magic.

-Armor:
You can imbue armor with magic you found. You need a 100 of the magic u want to imbue to do this. U can keep imbueing the same armor, but the effects will not stack, it will only have the effect of the last magic u imbued it with. Stronger magic=stronger armor.

-Summoning:
At a certain time in the game you will find summons (Ifrit, Shiva and Ramuh). When you cast the magic they are affiliated with there's a chance you summon them(shown on leaderboard). Later on you can find more summons, especially with the summoner class(see net).

-Classes:
At a certain time in the game you will be able to choose your class, these will have there own specialties and abilities. There are 4 classes you can choose from:
*Necromancer: this class is all about the raise dead spell. This is the only hero that can get the summon Ra'Qul, which is a skeleton summon.
*Priest: gives bonusses to healing spells and later on massive bonus to the holy spell. Priest also has an income that can be increased by doing quests.
*Summoner: has increased chance of summoning, can also find more summons and has some active summoning spells.
*Elementalist: this hero is all about destructive spells, for pure damage take this guy.

Classes also give bonusses when you do quests in the village they're from (you can take the portal in each town to transport to your village.

Version 1.22
Fixed dummy units at borders of map
Fixed Bahamut's attack
Fixed village items bug
Fixed dark fog (the dark fog is still there, but now it goes off when u leave the area, and it's not as dark anymore)
Summoners wolves level 3 don't have perm invis anymore
Slug Summon fixed
Added tomes in Castle Shop

Version 1.23b
Added possibility to end cinimatics for the ifrit, shiva and ramuh

Version 1.24
Added possibility to move items up and down by pressing the Up or Down Arrow key
Fixed visual bug with curaga, now the effects are see-able when u have full hp