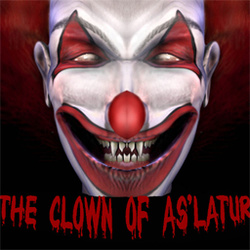 The Tales of Kaliim: Special Edition

The Clown of As'Latur
Alright, so this is the cinematic that won second place in the last cinematic contest, barely losing to Hemlock's Darkness Within, an excellent combat cinematic which I recommend.

As I'll keep my tradition of not revealing any spoilers, I'll just write a short comment of my ideas here.


A new field of cinematics?
Anyway, this is a map I'm quite proud of, and though I didn't win first place I still got a better reward from the contest. This very map.

What I tried to do and (I hope) have succeeded to do, is break new ice on the whole field of Warcraft 3 cinematics. The idea came from Lynch's Lost Highway I hope that this map will be just as much of an inspiration as my earlier work, if not more.

This is by no means an ordinary map, nor has anything like this ever been attempted, at least to my knowledge. This is a psychological thriller, by NO MEANS just another story cinematic.

Don't feel bad if you don't understand half of the story by the time you finish watching this. If you do understand half, then you're better than most. This cinematic is not one story, but at least three, and, to the creative viewer, possibly even more than three.

There is no strict version of the story. You chose which one to believe. You can look at all the things in the cinematic, all the merchants, the trees, inscriptions, as something random, or you can look at every last thing, from the rain, to the merchant clothing as planned and important details. It's up to you.

What I ask of you, the viewer, now is to do something you probably never did when watching a Warcraft 3 cinematic: Pay close attention and absorb as much as you can, and once the cinematic ends, reflect on it and see if you can make meaning for yourself, before asking others. As I said, there is no formula of the exact thing that happened, and chances are, what you think is right.

Before I go, just one thing I should also mention:
Make sure your in-game sound and music volume are equally tuned, preferably both being on 100%.


Info on my future plans
The Lone Panther series is back on track, and you can look forward to at the very least another part, namely the long awaited third part: Broken Belief. If everything goes according to plan I should be able to release it somewhere after mid July of 2010. After that I'll start working on the fourth installment, and possibly another special edition to the Tales of Kaliim, not directly connected to either the SotHM, TLP or CoA.

If you liked this, check out:
The Lone Panther and the Sect of the Holy Mother series
The official thread
The map of Kaliim
The discussion group